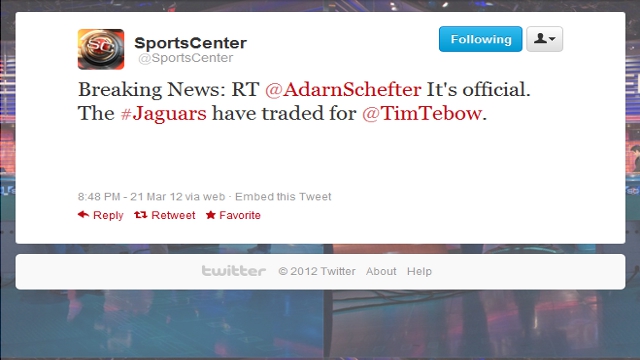 It was quite a day for those actively tracking the Tim Tebow trade chatter as the Broncos and interested teams were quick on the draw to engage in trade talks for quarterback. As the day unfolded though, the simple headline of “Tebow to The Jets”, which was reported early in the morning, became murkier as there was an odd contract irregularity that the Jets were balking at.

Suddenly there was a flurry of half baked rumors of Tebow being close to being moved to various NFL teams with rocky talent under quarterback or perhaps looking for a different look on offense. Depending on how wide you cast your media net, Tebow was in play for quite a bit of teams as the Jets stumbled through contract dilligence.

The leader of the pack outside of the Jets was clearly the Jaguars, whose local media was worked up into a frenzy at the possibility of Tebow returning to the area where he grew up. Adam Schefter, who was all over this story throughout the day, even tweeted that the Broncos were actually letting Tebow choose between the Jets and the Jaguars.  Shortly after, the Broncos who contradicted his earlier tweet by saying they’d do what was better for the Broncos.

Can you even tell the difference that the first name on this account is Adarn and not Adam? The font that Twitter uses make it hard to differentiate and the photo for this account is identical to Adam Schefter’s real account.

Nobody would have noticed but ESPN’s popular SportsCenter Twitter account, which has more followers than almost a third of the states in the country (2.6 million +) rewteeted the false news…

Fake Adam Schefter reveled that he accomplished a successful troll and the blogosphere and Twitterverse enjoyed poking fun that ESPN took the bait. Later on, SportsCenter tweeted out this apology for the confusion/ pre mature orgasms of Tebow zealots in the Jacksonville area.

Earlier tonight we tweeted out an erroneous report about the Jags acquiring Tim Tebow. We apologize for the error. He is now a Jet.

In this day and age, we’re walking a fine line as Twitter is where news is broken and coverage updates come 140 characters at a time. Fake and parody accounts are commonplace but are becoming more and more of a nuisance. Just the other day, I almost crapped my pants thinking Eddie George was dead, which traced back to a fake Sal Paolantonio account.

Yes, it’s a simple check to try to verify that the account breaking news is the real one before retweeting, but depending on how casual of a Twitter user you are, often a good fake account is hard to spot without busting out your forensic social media detective kit to investigate.

That said, when it’s BIG news and you have a six figure or in this case a seven figure twitter folllowing, it would probably be best to have some protocol on how to best promote breaking news taking place on Twitter.

Just like Wikepidia where tradionalists were worried about validity of information, the Twitter community is pretty good to stomp out inaccurate information pretty quickly. Wikipedia still has issues pop up, but it has earned its place as a resource over time and has come a long ways. Unfortunately though, Twitter looks to be the wild wild west of the internet where free IPads are a dime a dozen, hotties want you to watch their webcams, and fake accounts can operate and thrive without losing their accounts.

Twitter etiquette and protocol is still in its infancy. ESPN learned a valuable lesson today and while I’d like to say that they’ll avoid something like this again, at the very least I bet they’ll put in place a more defined process to tweeting out breaking news.

If nothing else, the NFL has done a marvelous job keeping me entertained in between tournament games. They’ve also put to bed three GIGANTIC stories that could have just dominated the television, interwebs, and social media airwaves in Manning, Tebow, and Bounty Gate. With MLB starting up and the NBA and NHL playoffs not too far off in the distance, I am glad to see the major NFL storylines wrap up in an orderly fashion as these media and fan infatuations can destroy your brain.