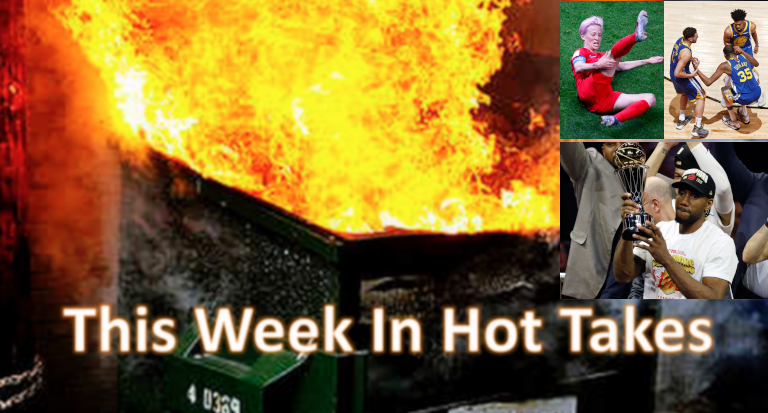 Welcome back to This Week In Hot Takes. This time, we’re looking at the hottest sports media takes from June 7-13.

5. Andy Benoit praises NFL uniform rules with another shot at college football numbers: Sports Illustrated’s Andy Benoit has previously popped up in this column six times, for takes on everything from Matthew Stafford being better than Russell Wilson to making voluntary workouts mandatory (“it’s ok to say [a player] should go to work 10 months a year”). And before this column started in 2017, he went viral during the 2015 Women’s World Cup for “women’s sports in general not worth watching,” which got him mocked by Amy Poehler and Seth Meyers. But one of the funniest and weirdest things that Benoit has long had a bee in his bonnet about is college football players not facing strict NFL-style positional requirements for numbers; he used that as part of his ridiculous “From a strategic entertainment standpoint, pro football annihilates college football” July 2018 piece (which carried the great note that he doesn’t actually watch college football), and he’s now back on that bandwagon. Here’s what he wrote this week as part of “In Praise Of … the Rules and Regulations for NFL Uniforms” (which, yeah, even the title there is quite the take):

The league also requires that certain positions wear certain numbers: Linebackers wear numbers in the 40s and 50s, quarterbacks can only wear numbers 1-19, receivers must wear numbers in the 80s or, thanks to Keyshawn Johnson, 10-19. College football looks like complete chaos because you might have a quarterback wearing, say, number 47 and a linebacker wearing number 14. Often, you can’t tell what position a man plays until he lines up. Besides screwing up fans’ viewing experience, this makes scheming needlessly difficult, as offenses have a tougher time differentiating blitzers from regular pass rushers, and defenses might not innately know when a receiver is actually just a running back split out wide.

The NFL graces us with jersey numbers that tell an accurate story—when you see an NFL player in uniform, you know almost right away what position he plays. That is, of course, unless he is Ty Montgomery, a receiver who years ago became a running back but, inexplicably, is still allowed to wear number 88. If the NFL more strictly enforced its own jersey number rules (and maybe cut down on the number of times a team can wear alternate uniforms) the league, from a uniform standpoint, will be perfect.

And here’s what Benoit wrote in 2018 about why those numbers make the NFL better than college football:

Jersey numbers. In the NFL, they mean something. Numbers in the 20s, 30s and 40s are running backs on offense and defensive backs on defense; those with 60s and 70s play in the trenches; teens and 80s are wide receivers, etc. This continuity—while imperfect (see Packers running back Ty Montgomery, whom the league inexplicably allows to wear No. 88)—tells a story. You can glimpse the field and quickly surmise what’s happening. For coaches and signal-callers, this streamlines the vital process of identifying personnel packages. That leaves more time for strategizing.

In college, the jersey numbers are random. Any player at any position can wear anything. It’s chaos. Looking at the field is like poking your head into a noisy classroom and trying to make out what students are saying.

Won’t someone please think of the chaos caused for the people (maybe just Benoit) who are unable to identify a player’s position by where they line up instead of by their number? Chaos, I tell you! Dogs and cats living together! (Also, it is really funny to think that Ty Montgomery, a player with less than 1,000 career yards as both a rusher and a receiver, has made an incredible impression by living rent-free in Benoit’s head for at least a year, just thanks to his unusual jersey number.)

4. Rob Stone says U.S. should “pull back, knock it around” instead of continuing to score against Thailand: The U.S. women’s national team’s 13-0 World Cup win against Thailand Tuesday took some criticism, with some blasting their celebrations and some going even further and claiming they should have stopped scoring (which seems like a problematic claim given that goal differential is the first tiebreaker between tied teams, but your mileage may vary). And amazingly, some of that criticism came from someone who should really know better, Fox panel host Rob Stone:

“13-0! I mean, I understand your point, but this one was done. This got humiliating at some point and just became an exercise in target practice for the United States. I understand all you can do is play against the team that’s lined up in front of you. …You know what I want them to do, pull it back, knock it around. …The throat was stepped on. Thailand was broken, they absolutely were broken.”

It’s amazing that Stone not only gets shot down immediately by the rest of the panel (where everyone else is a former player), but that he also doesn’t even mention the tiebreaker or why the U.S. might want to keep scoring. Just a great look for official tournament broadcaster Fox there.

3. Mike Francesa claims Kevin Durant “tried for selfish reasons”: In the wake of Kevin Durant’s injury Monday night (eventually confirmed as a ruptured Achilles’ tendon), there have been quite a few takes out there on if the Golden State Warriors were at fault for clearing Durant to play, if Durant shouldn’t have pushed as hard to return, if this was all just a fluke, et cetera. But WFAN’s Mike Francesa brought an even spicier argument, claiming that Durant tried to return not to help his team win a title (they’d eventually lose in six to the Toronto Raptors), but “for selfish reasons”:

The key part there comes around 0:47: “Listen, he tried, okay, but he tried, and we know why he tried, he tried for selfish reasons. He tried because he was enhancing or trying to raise his legacy. That’s what he was doing. It was a great opportunity for a big player to be bigger.”

Look, yes, plenty of athletes would like to be remembered for their accomplishments, possibly including Durant (but unlike Francesa, we’re not claiming to be inside Durant’s head and perfectly understanding his motivations). But it’s absurd to say a player trying to help a team that badly needed him was about “selfish reasons.” And in this case at least, even the “selfish reasons” Francesa claims Durant had would be perfectly aligned with the team goal of winning, making the argument even sillier.

2. Doug Gottlieb says a Knicks’ max offer would be seen negatively by Kevin Durant: “If I’m Kevin Durant, that kind of turns me off.” Amazingly, Francesa’s Durant take wasn’t the most ridiculous one this week. That would be from Doug Gottlieb, who claimed on his Fox Sports Radio show Wednesday that Durant would somehow view the New York Knicks more negatively if they decided (which they and plenty of other teams probably will) to offer him a maximum contract despite his injury.

“For the Warriors, I don’t think it’s a sign of weakness. For the Knicks, the desperation is ‘Hey, we know you can’t play probably for an entire year, and we just had Kristaps Porzingis who didn’t play for an entire year. We’ll still take you! We’ll still love to have you!’ Now, of course, if you see the good in people, you see the good, ‘Well, the Knicks moved all this cap space, moved mountains to make space for Kevin Durant, hired a coach that he would like to play for, put in place a front office that he would like to work with, that would allow Rich Kleiman [Durant’s agent] in the building, to kind of ‘be a part of the growth’ and blah blah blah blah.’”

“If I’m Kevin Durant, that kind of turns me off. ‘You still want me?’ ‘Yes.’ I understand everybody wants to be wanted, and there will probably be other offers, and maybe he looks at it in the Gottlieb sort of perspective of ‘Hey, they want me whether I have one good leg or two, they’re all in on the business of Kevin Durant.’ But when you stop and take a breath and realize what that means for the Knicks, I’m not sure it comes across as well as they think it should come across.”

That’s an incredible loop of logic from Gottlieb. Durant would respect the Knicks more if they…offered him less? Sure. That’s a bold strategy, Cotton.

1. Skip Bayless melts down after Kawhi Leonard wins title, Finals MVP: Fox’s Bayless has spent most of the last couple of years hating on Kawhi Leonard, especially after Leonard got Bayless’ beloved Spurs to trade him to Toronto. And that leads to some very funny convolutions, especially when Leonard does well. Leonard put up 22 points and six rebounds Thursday night and was named Finals MVP after the Raptors’ win, and that caused Bayless to just completely melt down (including with his continued trend of just referring to Leonard by his number):

What a sad human being pic.twitter.com/vF012ILUpP

Embiid was sick and hurt, which made possible No. 2 making The Luckiest Shot in Playoff History. Then KD went from injured calf to ruptured Achilles. Then Klay Thompson, having maybe the game of his life, hurt his knee. How lucky was No. 2?

Bayless also managed to question Leonard’s first Finals MVP (in 2014 with the Spurs):

And on Undisputed Friday, Bayless continued this rant:

No. 2 is not made for 4th quarters. He doesn't have a 4th quarter backbone in him and he never has. More @Undisputed now on FS2 https://t.co/LpmOIHGM5S

The media is protecting No. 2 the way they haven't protected anybody this side of LeBron James, the most overprotected superstar in sports. No. 2 could've called in sick for that game last night, and if Toronto had won, he still would've gotten MVP. More @Undisputed now on FS2 https://t.co/urh2oKZsHA

That’s just hilarious delusion. First off, points in the other three quarters still count just as much, and Toronto only won by four, so if Leonard “called in sick,” they’d need 18 of his 22 points to have come from somewhere else (which seems unlikely, considering how well Leonard was playing). And the fourth-quarter argument ignores how heavily the Warriors were keying on Leonard at that point, which opened up shots for other players. But that’s all logic and reason, and Bayless has shown he doesn’t have much of that, especially when it comes to this running vendetta against Leonard.