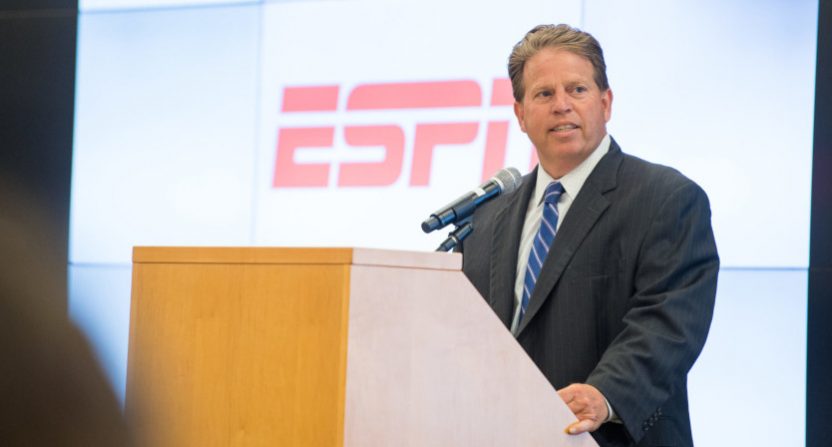 When can cancellation of a weekday show in favor of segments in other shows and a Saturday show be described as “expanding” it? When the show is Outside The Lines and the executive in question is ESPN executive vice president and executive editor/event & studio production Norby Williamson, apparently.John Ourand of Sports Business Journal has the news on the cancellation of OTL’s daily stand-alone show on Dec. 20, the shift to a Saturday show and to OTL-branded segments (on SportsCenter, E:60, and ESPN.com, daily beginning Jan. 20) and specials, and the incredible spin efforts from Williamson (seen above) to try and claim that this is a boost for OTL:

“We’re taking away ‘OTL’s’ linear half-hour daily presence and expanding it. If you compare that 30 minute weekday show from 1-1:30 to the amount of impressions that I’m going to get, we’re going to impact more people. … Everything has to evolve. Consumer habits are changing.”“…We’re getting back to what we used to do. This is the next iteration of OTL.”“…I believe in this strategy. I know it will be good for the show. And I know it will be good for ESPN.”

Those are amazing comments on a show that you’re cancelling (at least as a daily standalone show, which OTL had been since 2003). Yes, there are ways for “we’re going to impact more people” to be technically true; putting OTL-branded segments on SportsCenter and rerunning them across all the many, many editions of that show could get more total eyeballs on those segments (and it should be noted that the vast majority of things Williamson has said and done recently have been about emphasizing SportsCenter, and particularly about emphasizing non-controversial, non-opinionated just-the-facts SportsCenter).But it seems quite hard to spin cutting OTL’s daily show, replacing it with an extended SportsCenter, and giving OTL only daily segments in other shows as “good for the show” or “expanding it.” And it certainly doesn’t help the people who just want to watch a thoughtful beyond-the-headlines half-hour show like OTL instead of sitting through SportsCenter for the kernel of OTL that remains.

In many ways, this is playing out the way things did with Baseball Tonight. Back in April 2017, ESPN cut BT as a daily show, replacing it (at the time) with MLB Network’s Intentional Talk and reducing its standalone presence to a weekly program airing before Sunday Night Baseball. They’ve continued to air BT-branded segments on SportsCenter and elsewhere, but that’s a far cry from having a separate daily show. And their reported discussions last November about bringing back a daily standalone baseball program led to nothing in the end. So we can add OTL to the pile of once-prominent daily ESPN shows now reduced to one edition a week and a bunch of branded segments. (And it’s perhaps notable that this change to OTL comes after long-time host Bob Ley decided to retire in June.)ESPN’s networks are obviously their own, and they can make whatever programming decisions they feel like. And maybe there will be more viewers for 30 extra minutes of SportsCenter: Coast To Coast than there were for OTL, and maybe the OTL Saturday show and the daily branded segments will do fine. Cancelling OTL as a daily show also isn’t a sign that ESPN is “abandoning news”; their OTL figures will still be involved with these daily segments, and they’ll still have news featured in things like SportsCenter, E:60 (which has a primetime special Tuesday night), and other endeavors (including recently-launched ones like Backstory with Don Van Natta Jr., Cover Story, and the ESPN Daily podcast with Mina Kimes).But when it comes to the OTL segments in other venues, those won’t necessarily be as nuanced, in-depth, or effective as the full half-hour studio show was. Part of the appeal of OTL as a studio show was its ability to have knowledgeable anchors interviewing key figures in depth on the day’s breaking news, as they did with Sports Illustrated‘s Steph Apstein Tuesday about the controversy surrounding Astros’ assistant GM Brandon Taubman. It’s hard to see something like that work as well as a shorter OTL-branded segment buried inside another show, especially if some of those OTL-branded segments are pretaped instead of live.And what’s really bothersome about this move is the unbelievable amount of effort Wiliamson is going to in an attempt to try and spin an obvious downgrade for OTL, claiming that this is “expanding it” and “good for the show.” That’s a less effective spin cycle than one from a washing machine. Instead, why not just say that OTL’s current format doesn’t work for ESPN and that it’s more important to you to air yet more SportsCenter? That would be a much more honest and believable comment than claiming doing away with a daily show in favor of segments is “expanding it.”[Sports Business Journal; Williamson photo from ESPN Front Row]