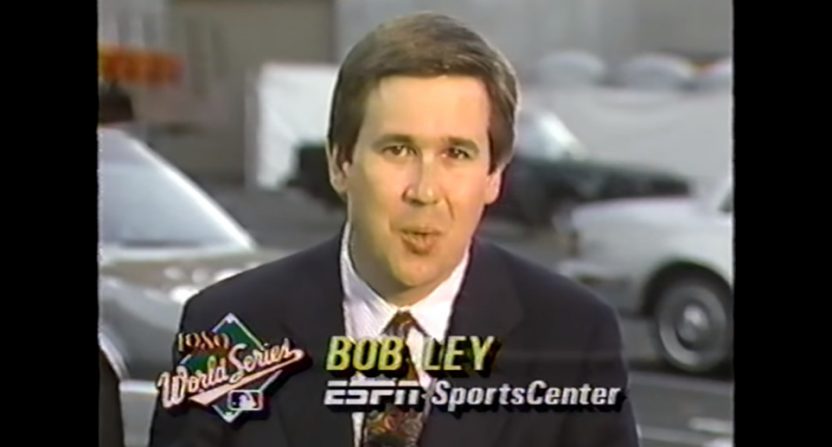 Bob Ley’s retirement comes in his 40th year with ESPN, and his career there has seen a lot of highlights. Ley, recently inducted into the National Sports Media Association Hall of Fame, joined ESPN as a SportsCenter anchor on September 9, 1979, ESPN’s third day of operation. From there, he went on to almost four decades of work in a huge variety of high-profile roles, from host of the first-ever televised NFL draft coverage to host of ESPN’s pioneering NCAA tournament whiparound show to a lead reporter and host on massive events (such as coverage of the 1989 earthquake during the World Series) to play-by-play work to three decades hosting Outside The Lines.

It’s almost impossible to imagine one person having so many diverse top roles across a wide variety of sports today, but part of that was about ESPN’s humble beginnings providing some opportunities, and Ley made the most of those. Last year on OTL, Ley discussed watching the first-ever SportsCenter broadcast (which came with an amazing intro song) as he prepared to move up to Bristol:

Ley went on to be involved in several firsts himself, including with the NFL Draft. ESPN televised the draft for the first time in 1980, and Ley hosted that coverage, a role he would hold through 1989. Televising the draft at that time was considered absurd by none less than NFL commissioner Pete Rozelle, as Barry Wilner of the Associated Press relayed earlier this year. But ESPN president Chet Simmons talked him into it, and Ley played a key role in making the event a success. In 2011, Ley spoke to Dusty Saunders of The Denver Post about those early draft telecasts, and about Rozelle’s “Why would you want to do that?” comment to Simmons:

“It’s difficult to believe that Rozelle, a marvelous visionary, would have had such a reaction,” the host of “Outside the Lines” said from his Connecticut home.

“But you have to understand that ESPN, founded that previous September, was still searching for live programming in order to find a solid identity on the sports map.

“Still, covering what looked to be a dull event didn’t seem to make much sense.”

Ley also recalls that Simmons, who had come over from NBC Sports, seemed a bit dubious.

“Before the draft started, he told Scotty Connal, his No. 1 assistant, that if things weren’t working out, he should end the coverage and simply cut our losses.”

Ley, working out of ESPN’s Bristol studios, teamed with George Grande, one of ESPN’s first “SportsCenter” anchors, in the Waldorf Astoria Hotel in Manhattan. And yes, Rozelle was there to make the draft announcements.

“To say our coverage is crude compared to what will happen this week is a masterful understatement,” Ley said.

“I remember studying a hundred 3×5 index cards about the college players the night before the draft started.

“We made up coverage as we went along. By the time the six- hour program ended, we at least had a semblance of a rhythm.”

Going back to the 1980 draft, at that point, the draft didn’t even feature many top prospects attending in person. Thus, first-overall pick Billy Sims (a running back from Oklahoma) wasn’t there, and Ley had to call him up on the phone for comment. But the draft helped establish ESPN as a sports force, and it gave them a key marketing opportunity; Simmons used the combination of the draft and the NCAA men’s basketball tournament as impetus for full-page ads in the New York Times. And Ley was important on that front, too; as per his ESPN bio, he hosted the NCAA basketball tournament studio show (1980-89) which perfected the “whip-around” format that helped to raise the tournament to its current status.” That’s not just ESPN internal buzz; comments from former NCAA tournament chairman Bob Frederick in a 2002 piece on the tournament’s history (admittedly, a piece published at ESPN, but still) agree with that view of what their coverage meant.

Bob Frederick, who was tournament chairman in 1995 and 1996, says ESPN stepped into the void and helped the tournament’s popularity grow tremendously with its morning-to-midnight telecasts: “I think a lot of it was the result of ESPN’s coverage of the first- and second-round games in the mid-1980s. A 16th seed might be ahead of a No. 1 seed, and ESPN would be switching back and forth between that and other games.”

Ley also did play-by-play for college basketball, boxing, soccer and CBA basketball, and he regularly hosted SportsCenter. Here’s a clip of him from 1985 (the video date is wrong), featuring everything from MLB highlights to discussion of the Pittsburgh drug trials (on MLB players using cocaine and amphetamines) and their impact on baseball:

That ability to handle everything from on-field highlights to more serious news was a hallmark of Ley’s time at ESPN, and he was often someone called on to handle big events, with recent examples there including the 2013 Boston Marathon bombings, the 2016 FIFA elections, and Muhammad Ali’s 2016 death. But that also started much earlier in Ley’s career; in 1989, for example, he played a vital role in handling ESPN’s on-site coverage of the Loma Prieta earthquake ahead of Game 3 of the World Series. Some clips of Ley’s work there can be seen in this 1999 retrospective, but an even more interesting one is his report on the aftermath that started SportsCenter the next day:

Ley’s talent for exploring more in-depth issues really got a chance to shine when Outside The Lines launched in 1990 with him as host. That show became a hallmark of ESPN’s journalistic efforts, and while it had plenty of format and timeslot changes over the years, it made a massive impact. Ley has won 11 Sports Emmys, including Outstanding Studio Host last year, and much of that has been about his work on OTL.

There have been a lot of Ley OTL stories that have sparked change over the years, from a 1998 special on Nike’s factories in Vietnam to coverage of the Larry Nassar sexual abuse scandal in 2016 and 2017, but one of the biggest was OTL’s reporting on the NFL concussion crisis (which won them a Peabody Award. Here’s some of that, a 2012 Ley-anchored report on the first concussion lawsuits against the league:

Overall, Ley made an incredible impact on the sports world throughout his ESPN career. It wasn’t always easy working there (he told Dan Patrick last year that during the early days of ESPN when the network was “hemorrhaging money by the bushel,” “there was a line standing at the Xerox machine getting our resumes ready”), but it proved to be a great platform for him, and ESPN gained a lot of credibility and respect from Ley’s work over the years.

Now, he’s moving on, and he told Jeremy Schaap on a farewell Outside The Lines Wednesday that “it’s just time,” saying he wants to spend more time with his family but may also do some further work with his alma mater, Seton Hall University:

A touching part of that farewell came from Ley and Schaap drinking Stag’s Leap wine together:

For 40 years, he has made every colleague and every show better. Thank you, @BobLeyESPN. We’ll keep making you proud. pic.twitter.com/7VYGGUWNgI

While Ley’s leaving ESPN, his impact there will be long remembered. We wish him all the best in what’s ahead.