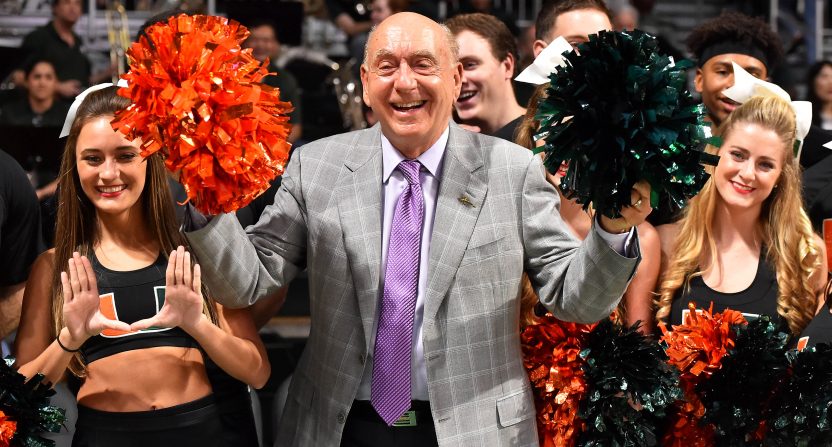 Once again, Dick Vitale has signed a one-year future contract extension with ESPN. Vitale, who turned 80 earlier this month, has been with the network since the 1979-80 college basketball season (shortly after their September 1979 launch). And they seem eager to keep him around, signing him to a one-year extension through the 2019-20 season in May 2017 and a one-year extension through 2020-21 in May 2018. Now, as per Michael McCarthy of Front Office Sports, Vitale has signed another extension that will take him through 2021-22. Vitale told McCarthy he’s thrilled to keep broadcasting, and he still feels “as young as ever“:

Vitale called ESPN’s first-ever college basketball telecast in December 1979, which saw the DePaul Blue Demons (fresh off their second Final Four appearance ever that March) best the Wisconsin Badgers, and he’s been a prominent part of the network’s college basketball game and studio coverage since. He received the Lifetime Achievement Award at this year’s Sports Emmys, and told Awful Announcing then “my career’s exceeded any dream I’ve ever had.”

And Vitale seems eager to keep going, both on camera and with his fundraising work. He’s been one of the most prominent ambassadors for the V Foundation (founded by ESPN and Vitale’s former colleague Jim Valvano in 1993)’s mission of raising money for cancer research, and he’s pushing ahead on that front too. Just this year alone, Vitale donated his percentage from his Mount Rushmores of College Basketball book to the foundation (a donation which had already reached almost $25,000 by January 10), and his 14th annual Dick Vitale Gala in May raised $4.3 million for the foundation.

It’s unclear if there will be any changes to Vitale’s ESPN duties yet, as they haven’t yet put out a release confirming this extension. But last year’s release of “Vitale will continue his work as a game analyst on key matchups each week during the regular season, as well as Champ Week. He will also remain a contributor on numerous ESPN platforms, including SportsCenter, ESPN.com and more” probably remains pretty accurate. This extension probably mostly just means that Vitale plans to stick with with ESPN for at least one further year. A whole lot of the sports world may be quite different in 2021-22, but if all goes according to plan, Dick Vitale will still be calling games on ESPN.