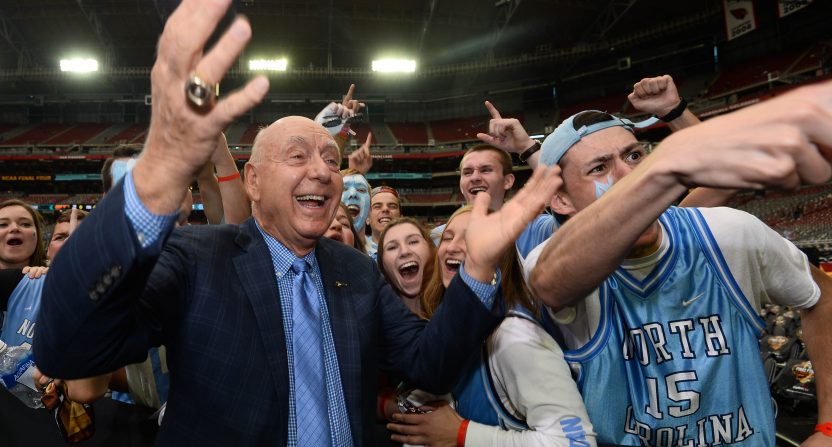 Dick Vitale’s acceptance speech for his Lifetime Achievement Award at Monday’s Sports Emmy Awards was supposed to only be seven to 10 minutes, but ended up running nearly 20. It must’ve been difficult to not only encapsulate an incredible 40-year career in such a short time, but to slow down the exuberant, pioneering life force that is Dickie V when he’s on a roll is also extremely difficult to do.

In a phone conversation with Awful Announcing on Monday, ESPN’s Vitale said he was concerned with keeping his speech succinct but was genuinely concerned that he would leave people out who helped him become one of the biggest names in American sports broadcasting over the course of four decades.

“I’m in awe, to be honest with you. And I mean that sincerely,” Vitale, who turns 80 on June 9, said, his enthusiasm and manner no different than it is when he’s on TV. “When they called me and told me I was going to be the recipient, I said ‘are you kidding me? Are you serious?’ When you look at the list of broadcasters who have been honored you’ve got Vin Scully, people like Howard Cosell, Keith Jackson, John Madden. It’s unbelievable. And to think, when I started 40 years ago, trust me, there’s never been a thought in my mind about any kind of Emmys, Hall Of Fame and my career’s exceeded any dream I’ve ever had.”

17 minutes and 45 seconds of an amazing @DickieV acceptance speech for his lifetime achievement sports emmy award looked like this in the TelePrompter pic.twitter.com/RgnKIbS9kW

Vitale told the story of how he ultimately got into broadcasting, through longtime broadcasting executive Scotty Connal. When Connal was at NBC in 1977, Vitale coached the University of Detroit to the Sweet 16 of the NCAA Tournament and the network televised the game against the University of Michigan regionally in the Midwest. After Curt Gowdy and John Wooden called the Titans’ loss, they told Connal that they liked Vitale’s enthusiasm and energy.

“They said write his name down,” Vitale said, “you should think about hiring him.”

After a brief run with the Detroit Pistons, Vitale was fired on Nov. 8, 1979, one of those “certain dates you remember.” Shortly after that Connal, who left NBC for a new, fledgling sports network, said he wanted Vitale to call the first college basketball game on Dec. 5 alongside Jim Simpson.

“I said ESPN? What is ESPN? It sounds like a disease.”

Forty years later, Dickie V’s legend has grown alongside ESPN’s development into the ubiquitous force it is today.

Vitale called ESPN his second family and credited all the play-by-play people, producers, directors, graphic operators, managers and drivers who helped him over the years, but singled out Simpson, Bob Ley, and former network president George Bodenheimer (who introduced him on Monday) with helping him from the beginning.

“They’ve treated me like royalty, I can’t tell you,” Vitale said. “I’ve been a blessed, lucky guy.”

Vitale’s overflowing love for college basketball has helped grow the sport and the network, popularize his catchphrases and has made him popular royalty on college campuses across the country.

“Are you kidding me? When I walk on a college campus, I cannot believe it,” he said. “Think about this. I’m going to be 80 years old. I act about 12, and those kids make me act like it. They start chanting my name, they want to pass me in the crowd, they want to rub my bald dome. It just amazes me.”

Lately, however, Vitale has toured college campuses for a vastly more important purpose than just analyzing basketball games. Dickie V’s current full time job and obsession has been raising money and awareness to help fight childhood cancers and diseases. He spoke at an event at Texas Tech last Thursday to raise money for children with brain injuries, and was at an event on Saturday in Ann Arbor to raise money to help fight a disease called DIPG, diffuse intrinsic pontine glioma, a type of brain tumor that Vitale says nobody’s ever defeated before.

“There’s nothing dearer to my heart right now than helping kids battle cancer,” he said.

Vitale was with journalist and author Mitch Albom, who lost his daughter to DIPG, at the Ann Arbor event and helped secure a $200,000 grant for Albom’s foundation to help fight the disease. Vitale held his own charity gala two weeks ago and helped raise $4.3 million at that event alone.

“If you have brain cancer with DIPG, right now there’s no shot,” he said. “And I’m going to dedicate myself to getting dollars to battle this disease.”

Vitale said it was so important to raise money for pediatric diseases because just four cents on every dollar of federal funding for cancer research goes to pediatrics.

“And that to me is criminal,” he said.

On Wednesday, Vitale celebrated his 48th wedding anniversary with his wife Lorraine. He said he has five healthy grandchildren, which makes seeing kids suffer with cancer hurt so badly. Vitale told the story of a boy named Tony Colton who battled cancer for six years and spoke at his Florida home. At his bedside, Tony basically told Vitale to keep doing what you’re doing.

“I said to him, Tony, I promise you to my last breath, I’m going to beg and plead for dollars from people and get money for pediatrics.”

On the court, Vitale will never forget the over 35 years of North Carolina-Duke games he’s called among so many other memorable telecasts. He said he has a good working relationship with current ESPN president Jimmy Pitaro, who told Dickie V that he’s got a contract for life.

“You wanna work? As long as you’re able to work physically and emotionally and mentally, you got a job,” Vitale said.

As he approached his 80th birthday and 40 years at ESPN as the network nears its own milestone, there are few people who represent ESPN as well as Vitale, and there are fewer who represent the game of college basketball— now as much as ever— better than the great Dickie V.