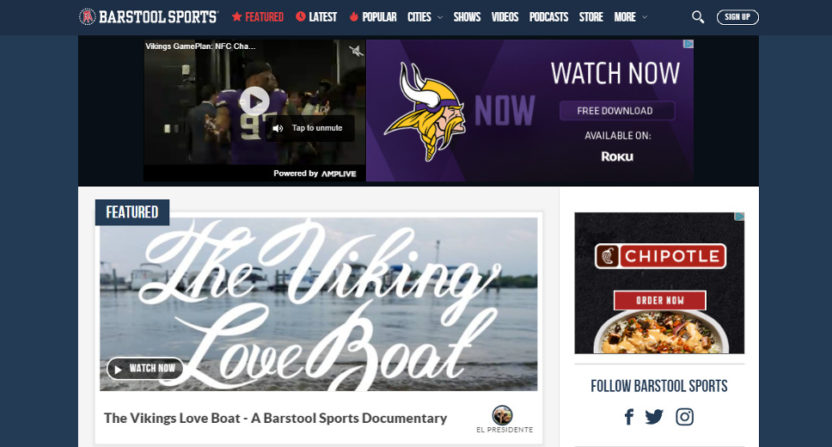 After a 2017 that saw major growth and regular headline-making moves, Barstool Sports looks to continue those trends in 2018. The company already launched a Sirius XM channel (an expansion from having just a daily show) last week, and now they’ve received an additional $15 million in funding from majority owner Chernin Group. As Bloomberg’s Gerry Smith writes, they already have big plans for the new money:

Barstool plans to use the funding to create new properties — like branded alcohol or even its own bar — and expand Rough N Rowdy, an amateur-boxing promoter it recently acquired, founder Dave Portnoy said on Tuesday. Barstool, which has been the subject of controversy for hosting content considered sexist, also plans to roughly double its staff to 160 by hiring more writers, video producers and podcast hosts. The New York-based startup also plans to start selling subscriptions to fans who want exclusive content tied to its podcasts or online Q&As with talent and personalities, according to Chief Executive Officer Erika Nardini.

The latest funding “gives us the freedom to follow our instincts,” Portnoy said in an interview.

…“The company has far exceeded our plans and all our models,” said Mike Kerns, president of digital at the Chernin Group. “There are a lot more areas we need to invest in.”

Kerns said Barstool Sports will probably enter new lines of business through acquisitions. In December, the company sold 34,000 pay-per-view packages for as much as $15.99 each for an amateur boxing match in West Virginia. Barstool wants to host boxing matches in “every state we can get licensed,” Portnoy said.

All of these specific areas have been discussed before, from expanding Rough and Rowdy (the West Virginia-based boxing promotion they bought last fall, which brought in those 34,000 PPVs; the previous Rough N Rowdy PPV, hosted on Barstool in March before Barstool bought the promotion, picked up 13,000 buys, so that’s a nice boost) to launching a premium service “with a bunch of extra shit” to mulling the idea of “branded sports bars across the country.” But the new funding here is particularly notable, as that should make it much easier for Barstool to get into some of these businesses with significant startup costs. And Kerns’ comments makes it sound like they may target even more lines of business through acquisitions.

So Barstool is one of the few places that’s hiring, and they’re probably doing so at a good time given the amount of unemployed and underemployed sports talent out there. And while it’s been discussed for a while that Barstool’s expanding, the specific numbers on just how much they plan to bump up their staff are notable.

The financials in this report are worth discussing as well. Barstool CEO Erika Nardini told Smith the company is profitable (but didn’t provide further specifics), and mentioned that Chernin has already invested about $25 million in Barstool. Smith also writes that this latest funding round values Barstool at around $100 million, and that Portnoy wants its valuation to reach $250 million in three to five years. That’s not on the scale of companies like Vice (valued at $5.7 billion in June 2017) or BuzzFeed ($1.7 billion in 2016), but Barstool is much more narrowly focused than those companies are, specializing just in sports.

It’s also certainly positive that the company’s currently profitable rather than just an “invest for it to pay off later” play, at least according to Nardini’s comments. And they have a whole lot of brand loyalty, and loyalty that can be turned into revenue, especially when it comes to Barstool products, an area where the company really stands out in the sports media realm.

Digiday reported in November that Barstool did 35,000 orders over the weekend of their Black Friday sale, and there aren’t many media brands that can boast apparel/merchandise success on that level. And their dives into different realms of media are giving them some extra opportunities, from the expansion on the radio side to the documentaries. (A new one, on the Vikings’ “love boat,” was just released.)

Will that eventually lead to the $250 million valuation Portnoy is targeting? Maybe. A lot’s going to depend on how these various expansions go. Will the revenue from extra content match or exceed what Barstool’s paying out to new hires? Will Barstool be able to keep Rough N Rowdy growing year-over-year and expand it to new areas and possibly new states, or are the numbers who tuned in this year near that promotion’s ceiling? And will a foray into branded alcohol and/or sports bars work out, or will that falter like so many ESPN Zones before?

We’ll have to wait and see. We’ll also see if they wind up in further controversies, and if those affect the brand. But this piece is notable for the report of extra funding for Barstool, and for the confirmation of what they plan to do with it. It should be interesting to watch how their new initiatives pan out.