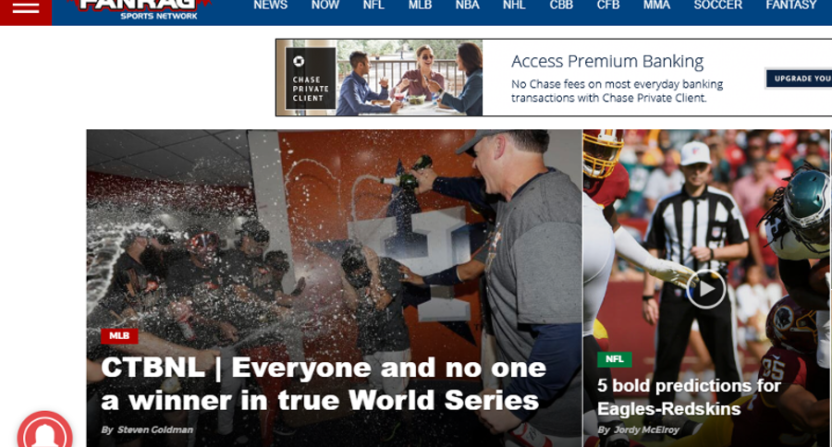 It looks like the latest site to cut a significant number of writers is FanRag Sports. Back in August, FanRag laid off long-time director of content Tommy Stokke and several other writers, and now they’ve made further cuts. Many FanRag writers tweeted Monday that they were let go, with some mentioning that the company had a new video-focused direction:

Unfortunately, my job has been cut @FanRagSports This is final week. I WILL rebound. That's what I do. Thanks to everyone who read my stuff

I want to thank @FanRagSports for the opportunities over the past few years and wish them the best in their new video-focused direction.

And my fun run at @FanRagSports is over. I'm a free agent. If you need someone to cover #MLB, #NFL or anyone else, I'm here.

Shock for me today. A consultant for #FanRagSports called to tell me they are moving to more video content. He relieved me of my duties.

Steven Goldman announced that he wouldn’t be writing for FanRag any longer, but would continue podcasts with them:

I too have succumbed to the FanRag culling, though with one critical exception: The Infinite Inning podcast goes on.

This decision follows major rounds of layoffs elsewhere this year, including ESPN, Bleacher Report, SI, Yahoo, Fox Sports, Vocativ, MTV, Mic, Vice, and more. Many of those layoffs have mentioned pivoting to video, even if that approach hasn’t paid off for many of the sites that have tried it.

It’s unclear what exactly FanRag’s plans for their future content are, but there are a couple of mentions of an expanded video focus here. We’ve reached out to FanRag for comment on their future plans and will update if we get a statement from them. In the meantime, FanRag took some Twitter criticism for these cuts:

So how many others from FanRag got laid off today? Feel terrible for some good people. #PivotToVideo is such a joke. #PayYourWriters

Really bummed to see more journalists losing their gigs as @FanRagSports shifts to video. I must be in minority liking words over video. ?

On another front, FanRag did announce a partnership with the Locked on Podcast Network earlier Monday:

Exciting day for Locked on Podcast Network. We have partnered with @FanRagSports to build lockedon().com sites for all of our podcasts. pic.twitter.com/nGEvcNIp0n

The network is certainly expanding their audio content (and it’s notable that Goldman’s podcast is staying there, too), and several high-profile FanRag writers, including Jon Heyman and Zach Harper, haven’t tweeted about leaving. This makes it look like FanRag isn’t completely abandoning writing, but they do seem to be emphasizing other mediums, and it does appear that they’ve cut several of their regular writers. And that adds to a disappointing industry-wide trend. We’ll see what’s next for FanRag.