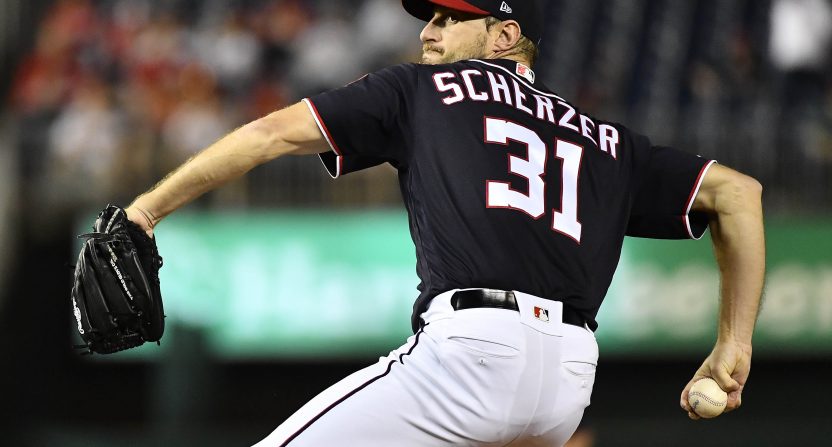 An important and underdiscussed angle of MLB’s new Friday night doubleheader exclusive streaming partnership with Apple is that while these games are slated for pay subscription service AppleTV+, they will be free without a subscription for at least “a limited time.” That fits in with past exclusive MLB streaming projects on YouTube and Facebook; those games may have posed an inconvenience to those not accustomed to watching streaming services, but there wasn’t actually a pay barrier (unlike with the broadcasting model of regional sports networks, which remain mostly only available on traditional cable and satellite, plus the occasional streaming MVPD package).

And that’s an interesting thing to keep in mind when it comes to reactions to news about specific games that may be on this AppleTV+ stream. One of note there is this piece from Jesse Dougherty of The Washington Post Saturday. Dougherty writes that the April 8 New York Mets-Washington Nationals game (likely Mets’ pitcher Max Scherzer, seen above in 2019, making his first start against the Nationals since he was traded through the 2021 season) is set for AppleTV+ (as per four of his sources):

The Washington Nationals-New York Mets game on April 8 will be exclusively broadcast on Apple TV Plus, according to four people with knowledge of the situation, kicking off Major League Baseball’s newest streaming partnership. The game, which will be available for free and not require an Apple TV Plus subscription, will not be shown on the Mid-Atlantic Sports Network, the Nationals’ television network, or SportsNet New York, which broadcasts all in-market Mets games.

And if pitching plans hold, as expected, that is the night Max Scherzer will return to face his old team at Nationals Park.

The game will not be subject to any blackout restrictions, but fans will need to have or download Apple TV Plus. According to a joint announcement from MLB and Apple earlier this month, games will only be free and not require a subscription for a limited time. Nationals-Mets will be part of an Apple TV Plus doubleheader, though the other matchup is not yet public.

…It makes sense for both MLB and Apple to want to make a splash with their first offering. It’s just also fair if some fans are frustrated with having to shift their setup or miss the second game of the regular season — one that, given what Scherzer means to each team, will be chock full of emotions and intrigue.

But is that fair, though? To be fair to him, Dougherty is not the only person raising this as an issue. There have been several people, including some in the media world, claiming that this is somehow a way for MLB to restrict who can watch this game. But the actual hurdle here seems incredibly small. If this was about fans having to sign up for an extra paid streaming service, yes, there could be a complaint there; “I already pay for this RSN, why are you charging me more?” has some merit (although it’s worth considering that there have always been national exclusive games not shown on RSNs).

But the literal hurdle here is merely downloading the Apple TV+ app, which is available on Roku devices, Amazon Fire TVs and sticks, and many other connected-TV solutions. It’s not a particularly hard app to get. And if someone is able to get Netflix, Hulu, Peacock, HBO Max or any other streaming service, they can probably get the Apple TV+ app. (If they don’t already have it to watch Ted Lasso.)

By contrast, compare that to the hurdles of actually watching this game if it had been left on the RSNs versus placed on a free version of Apple TV+. As of 2021, ATT’s DirecTV Stream was the only virtual MVPD to offer MASN. SNY is  a little better, as it’s also available through fuboTV and YouTube TV at the moment. But those are plans starting at $65/month (fuboTV or YouTube TV) or $85/month (for the DirecTV Stream package that includes RSNs). And getting those RSNs through a traditional (cable or satellite) MVPD is likely a similar cost. Yes, if you already do that, there’s no added cost for watching a game there.

But a game on AppleTV+ comes with zero cost to anyone under this limited subscription-free initiative (not counting internet costs, but those tend to be existent anyway). And even if these games are eventually rolled into the AppleTV+ subscription plan, that’s $4.99 a month. It’s fine to talk about this as a hurdle in terms of fans having to “shift their setup,” but it’s not a financial hurdle at all at the moment (in fact, it’s the removal of a financial hurdle for those who don’t have a package that includes RSNs). And if this does eventually migrate into paid AppleTV+ subscriptions, that’s an extra hurdle for those who do already have packages with RSNs, but it’s still much cheaper for those who don’t have that.

There’s maybe a better argument that pulling games for these packages will be annoying to fans in terms of losing their local and familiar RSN broadcast and its announcers. But that’s always been the case for exclusive national games, with everything from ESPN’s Sunday Night Baseball to the Facebook and YouTube games. And it’s sort of interesting that we don’t see these kinds of arguments come up with the other cable games. Yes, there are some complaints about “Ugh, I have to listen to the ESPN broadcast,” but we rarely see “Less people will watch this game.” And yet, when it comes to a broadcast that’s being offered for free to anyone with an internet connection and a means of getting the AppleTV+ app, this is somehow MLB increasing the barriers to watch versus the existing and high barriers of RSNs.

With any of these discussions, it’s worth keeping in mind that “having access to a RSN” is not a natural or default state. That’s a choice that requires paying at least $65 a month for a cable or streaming MVPD package, and in the case of many RSNs like MASN, picking a very specific MVPD that carries it when the others don’t. And yes, so many MLB games are still on RSNs that those who want to watch a lot of games of a particular in-market team will probably have to do that for now (until the long-rumored OTT streaming from RSN owners like Sinclair actually becomes reality).

But moving a game from a RSN to a free streaming platform is not an access barrier in most meaningful ways. It’s actually removing a financial access barrier for many. And it’s, at worst, presenting a slight inconvenience to those who do have RSNs but aren’t particularly streaming-cognizant. And it’s fine to see some gripes about that inconvenience, and perhaps especially about the loss of a familiar local broadcast in favor of a national one.

Despite that, it would be nice to see less discussion of “this means less people can watch this!”, as that just isn’t true. Less people may watch it, absolutely; that depends on how well the AppleTV+ platform is embraced for this versus what the conventional RSNs would bring. And some of the people who do watch it may be annoyed about it being a national feed rather than a local one. But many more people who do not subscribe to RSNs are now able to watch this game. It’s just a question of if they choose to.

1 thought on “Max Scherzer’s first game against the Nats may be on Apple TV+ (but for free), rather than on cable RSNs”