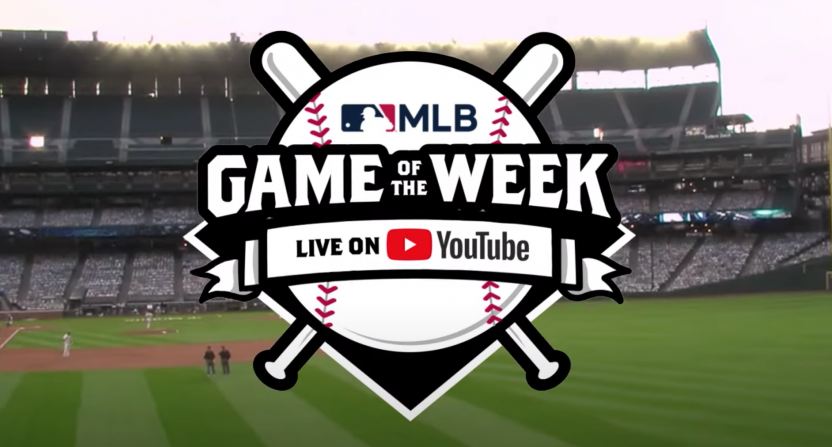 For the third straight year, YouTube is doing exclusive MLB broadcasts, with 21 games available for free on that site this year (including Thursday afternoon’s Giants-Reds game). As with last season, MLB Network’s Scott Braun is again calling the majority of these games, and he spoke to AA Wednesday about how the broadcasts have changed since last year. Braun said one big difference is the ability to mic up players for each game, which he thinks adds a lot to the broadcasts.

“We’ve mic’d up guys in the past, but now it’s a consistent part of the broadcast for this season. And I get so pumped up every time my producer gets in my ear and says ‘Hey, Scott, we’ve got more Nelson Cruz sound,’ or Shane Bieber sound, or ‘Mike Trout just reacted to that play.’ And I then get to say, like, ‘Okay, Mr. Trout, your thoughts?'”

“And it’s such snackable content for social media apps and other shows; I see it afterwards on studio shows for days. I’d watch a whole show of that, and I know there is a show like that on YouTube to satisfy that craving for hearing all the chatter on the field. And the mic’d-up content prompts discussions with our analysts.”

“And I would say, overall, the reaction from the player side and the fan side on the YouTube games consistently having multiple players mic’d up for each game has been so, so excellent. I’m really excited about it. And it brings such a unique aspect to the games to be able to hear them throughout.”

Braun said players have really embraced the idea of being mic’d up for these broadcasts.

“I think they’re having a lot of fun with the fact that it’s almost like someone shadowing them through the day. Often the soundbites will include someone like Josh Harrison saying ‘Hey, bring it for YouTube today, boys!’ They’re having fun, and recognizing that we’re there with them for the day. We’re often including players that know how to talk and know how to entertain.”

“I would say the way that I can tell it’s been so well-received is the actual content and soundbites we’re getting from them. And even some of the players have been telling me afterwards that it was really fun and they’ve been watching the game back or having family or friends see what they’ve been saying during the game. It is a pretty quick turnaround from their soundbites to when we play it; it’s not live, but the production team turns around the soundbites pretty quickly so we can get reaction on particular plays.”

Another change for this year is the way they’ve expanded the usage of polls.

“We’ve amped up our polls during the game,” Braun said. “We’ll have about four questions per game, related to current topics in that specific game or current topics in MLB that week or related to one of the teams or players that we’re watching. Some examples might be ‘How many no-hitters will we see this season?’, ‘Who has the best hairstyle in the game?’, ‘Who has the best pitch in baseball?’, ‘Which surprise team will make the playoffs?'”

Braun said the polls have also worked well with the in-game interviews.

“We have one or two in-game interviews per game as well, and [for Giants-Reds], we have Wade Miley, who just had that no-hitter. And he wore a temporary Hulk tattoo that his four-year-old son Jeb gave him, and that’s become a thing now with pitchers on the Reds wearing Avengers temporary tattoos for fun. So one of our poll questions, and it will pay off when we’re chatting with him, is ‘Which all-time MLB superpower would you most like to have?: Rickey Henderson’s speed, Babe Ruth’s power, Ozzie Smith’s Gold Glove, or Nolan Ryan’s fastball?’ I think that’s really fun.”

In our conversation last year, Braun noted that part of what makes calling the YouTube games fun is that the audience has been younger and more global. He said that’s still the case this season.

“That’s continued. It’s certainly a global audience, and I keep that in mind as a broadcaster. And that audience is also there for the 30 minutes pre-game, the 30 minutes post-game. I know it’s a global audience from the messages I get on social media from fans watching worldwide, and also fans from other teams that tell me how much they want their team to be on the YouTube game of the week.”

Braun said those messages can also lead to him responding on the broadcast.

“I’ve never shouted someone out before, but I’m going to shout someone out [during Giants-Reds] for the first time ever on a broadcast. My Instagram following is pretty interactive, and there’s someone who watches from Bermuda and is an absolute die-hard, watches every game, and he messages me every once in a while like ‘Hey, the broadcast was real fun today.’ And he occasionally says ‘Hey, are the Reds ever going to be on?’ So with the Reds on, someone like that, I get to just personalize it for them. And it’s cool to see someone from outside the U.S. watching and being absolutely pumped. And it’s free and it’s super easy to watch; just type MLB into the YouTube search bar or the YouTube app and it’s there.”

Another piece of the puzzle for these broadcasts is the questions from YouTube creators, which Braun said have helped make the telecasts better.

“And as we keep evolving and adding poll questions and mic’d up players, we’re also continuing with ways to incorporate the live chat comments from YouTube creators. We relay some of the questions directly to the players in the dugout interviews; we also answer creator questions more organically, linking them to topics we discuss during the broadcast and the post-game show. And they’re great questions, and they play right into what we’re doing.”

“We’re seeing that live, and if there’s something that’s relevant, then we’ll bring that in. Antonelli Baseball, that’s a big YouTube channel actually run by a former MLB player, Matt Antonelli, he might comment ‘Do you think that he’s using his slider more?’, and maybe he’s watching that particular pitcher, and I can then throw that question to our analysts, which are Danny Graves and Jeremy Affeldt for Giants-Reds. And they can respond while we’re watching.”

And beyond that, fans watching these broadcasts now even have the option to vote for the player of the game (from four options), which Braun said has been a fun expansion and even includes a trophy.

“Part of our polling now is the YouTube Player of the Game. The YouTube Player of the Game brings more menu options to the viewer; as you know, many broadcasts do player of the game, but for us, we said ‘Let’s hand that option to the fans,’ because we have a poll option that’s usually accessible on their stream already. So that gives them the opportunity to not only choose who the player of the game is, but also choose who the post-game interview is, because that’s who we’re going to talk to after the game.”

“And the trophies are actually really cool, and YouTube designed it really beautifully. And the players have a lot of fun with it. The players embrace it and have fun with it, and it’s a good way to make a regular-season game feel more special or standout. YouTube engraves their name on it and sends it to them.”

“It’s a nice touch, and it’s another thing that we’re able to hand to the fans; most regional broadcasts will have a ‘Name-that-sponsor player of the game,’ so YouTube’s doing that, but we’re letting the fans make that choice.’ It’s a pretty big part of what we’re doing, and it’s received some good buzz on social and from the players as well.”

Here’s the MLB on YouTube schedule through the All-Star break: