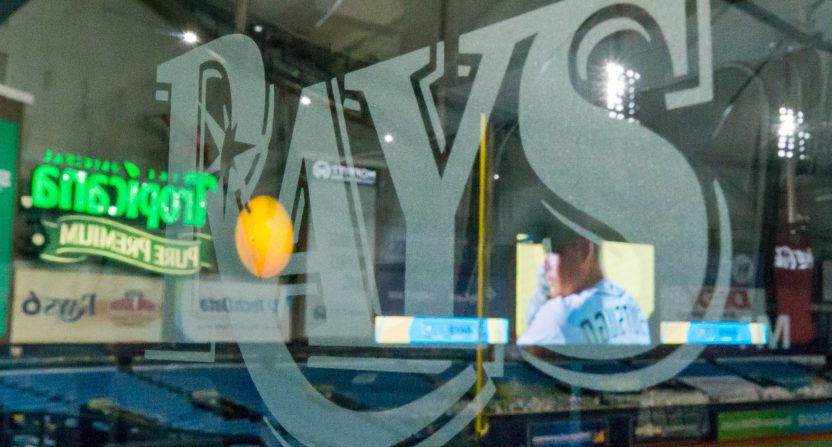 Yesterday, we wrote about Sinclair revealing details of their direct-to-consumer streaming product.

That included the revelation that a fifth MLB team was on board:

During an earnings call on Wednesday, Sinclair CEO Chris Ripley discussed the launch of the company’s upcoming Bally Sports direct to consumer app.

In the call, Ripley said that Sinclair expects the app to soft launch in the first half of 2022 with access to the five MLB teams whose digital rights Sinclair own.

At the time, it wasn’t clear who that fifth team was, as only four teams were known to have signed on.

Now, thanks to a report from Anthony Crupi at Sportico, we know that team is indeed the Tampa Bay Rays:

While Ripley did not identify the MLB team in question, RSN sources pegged the Tampa Bay Rays as the latest Bally Sports partner to sign off on the DTC offering. The Rays join a roster of early adopters that includes the Kansas City Royals, Milwaukee Brewers, Miami Marlins and Detroit Tigers.

In terms of local TV ratings, the Rays are in the middle of the pack, averaging around 47,000 viewers per game on Bally Sports Sun. The timing of the Rays’ renewal was particularly fortuitous, given that Sinclair’s carriage deal with Spectrum is set to expire before the end of March. With 98.9% coverage in Hillsborough County, of which Tampa is the county seat, Spectrum is by far the dominant cable operator in the home market. If the two sides can’t come to an agreement and Sun goes dark, Rays fans will still be able to catch all the action via the new DTC service—provided baseball actually gets played this spring.

All of this, of course, presumes that an MLB season will eventually be played this year. At this point in the process, betting on a complete cancellation would seem foolish, but it does feel like a reduction in game inventory is likely coming.

Still, assuming things do eventually resume, expect Sinclair to use these five markets as a soft launch test, as our Joe Lucia noted yesterday:

Following his comments about the soft launch, Ripley said that Sinclair expects to roll out the rest of the RSNs in the second half of 2022, which would put it out of reach for the remainder of the 2021-22 NBA and NHL seasons and in target for the start of the 2022-23 seasons. Sinclair struck deals with the NBA and NHL teams on its networks for their digital rights in recent months, and at the time, I said it made sense to focus on getting the service live for the start of their next seasons, rather than for the final month or so of their current seasons.

There’s still no news on pricing yet (which shouldn’t be a surprise), but once there is, we’ll let you know.

Sinclair is pinning a lot of their hopes on this product, and it remains to be seen whether they can pull it off. Having an actual season would be a big help to them, especially considering their financing relies on a decent amount of debt.