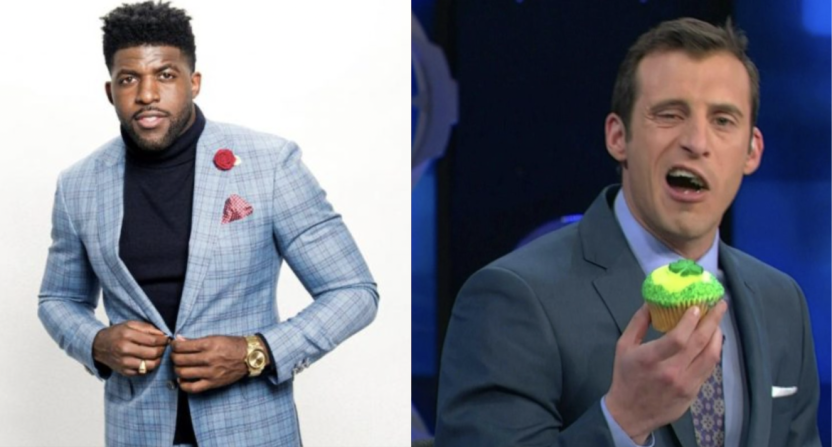 Notably missing from that list is Kansas City’s Patrick Mahomes, who has taken the Chiefs to two Super Bowls, been named NFL MVP and Super Bowl MVP, and is a four-time Pro-Bowler. Acho’s debate partner, Harry Douglas, said what a lot of viewers were already thinking.

Harry Douglas handled about as well as one could. pic.twitter.com/p6iBloyLOG

Many others chimed in on the rankings, including Molly Qerim, who called Acho’s list “bogus.”

As the day went on, plenty of other people shared their thoughts on the rankings, including Fox Sports radio host Doug Gottlieb, himself a noted take artist.

If you don’t think Pat Mahomes is one of the 5 best QBs in football, you probably shouldn’t talk about football for a living… or to friends… or strangers..

This tweet soon caught the attention of Sam’s brother, FS1 personality Emmanual Acho. He did not appreciate it.

You got a real slick mouth for being a back up on the court and on television, you got to pick a struggle. https://t.co/oU5KU2KLib

Believe it or not, Gottlieb didn’t appreciate the quote-tweet and pushed back on the criticism.

When you have no defense for your brother’s indefensible take, you go at the messenger. https://t.co/yDmvUdVXzD

Acho then weirdly admitted that his brother’s take was “trash” but that still didn’t warrant the critique for some reason and then went all-in on Gottlieb’s playing and broadcasting careers, even looping in Colin Cowherd to make this a rare Fox Sports on Fox Sports battle.

My brothers take was trash, but so was your career as a pro athlete and on air personality. So we can agree there is trash all around. You keep talking slick on twitter like you somebody. Ask @ColinCowherd to take a day off so you can get some air time again. https://t.co/TAltt4cqgw

To which Gottlieb simply said, “what a dick.”

What a dick. Thanks for showing your true colors. https://t.co/IeJpAJxQlQ

Not done yet, Acho reiterated that he was going to defend his brother no matter what, terrible takes be damned.

I’ll take and deliver a bullet for my brother. Don’t come for us unless we send for you. Have a good evening my friend. https://t.co/X6II7ekd2H

Look, far be it from us to blame anyone for wanting to take shots at Doug Gottlieb. We get it. He’s earned it. Plenty of times. Over and over. Fair enough.

But if we’re being honest, we’re gonna give him the nod here. Acho literally admits he’s defending a trash take by his brother and seemed to seek out Gottlieb over his comments, instead of the thousands of other people doing the same thing all day long. Which, again, we understand, but still.

If Acho, who has plenty of ludicrous takes of his own, is serious about going nuclear on anyone who speaks ill of his brother, we wish Hannah Storm well tomorrow.