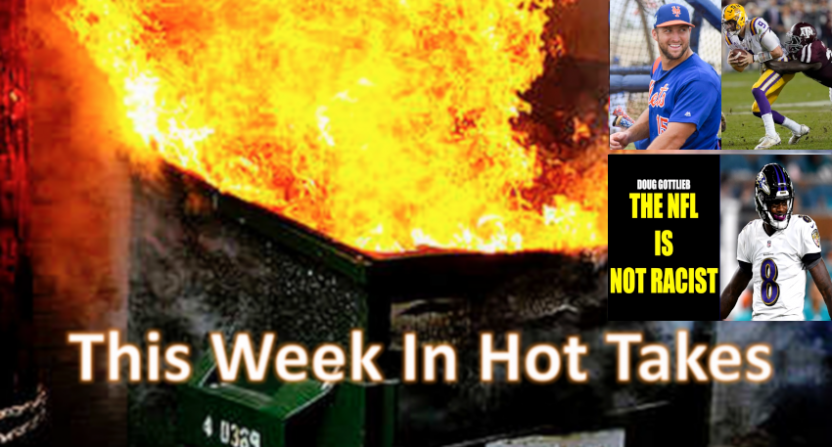 Welcome to another edition of This Week In Hot Takes, this time looking at the hottest takes from Nov. 23-29.

5. Tony Gonzalez says “Philip Rivers is the best QB in NFL history that has never won a Super Bowl”: Gonzalez showed up on FS1’s Speak For Yourself this week, and he brought a take that fits right in with that show:

“Philip Rivers is the best QB in NFL history, that has never won a Super Bowl.” — @TonyGonzalez88 pic.twitter.com/nqd4L3Pr7g

“Best quarterback that has never won a Super Bowl” is always a hot topic for lists, from NBC to The Big Lead to Bleacher Report (which somehow went 50 deep). And there are a whole lot of options, from Dan Marino to Jim Kelly to Fran Tarkenton to Sammy Baugh. Rivers appears on some of those lists (usually lower down), and comparing across eras is tough, so there’s no definitive answer to this question, but boldly declaring Rivers as the best here is quite the take. And it’s not an answer that many would give here.

Nothing like some xenophobia from Phil. But he’s living proof of what happens when you undeservedly promote something from New York at all costs.

3. Danny Kanell argues that LSU should be lower-ranked than Washington because they gave up 74 points in a game, ignoring that said game went to seven overtimes: Look, the College Football Playoff rankings always come with room for debate, and you can make a case that No. 10 LSU should be lower. However, you probably shouldn’t make that case the way CBS’ Danny Kanell did:

Washington should be the highest ranked 3 loss team. They lost all 3 games on the road by 5 points or less. It’s not really that close. And they damn sure didn’t get shut out at home or give up 74 points in a game.

The “give up 74 points” reference comes from LSU’s 74-72 seven-overtime loss to Texas A&M Saturday. That game was 31-31 at the end of regulation. That’s not a particularly good argument that they have a bad defense. And it should be noted that LSU’s three losses have come to more highly-ranked teams than Washington’s; none of the teams Washington lost to (Auburn, Oregon and Cal) are currently ranked. But a data point like this, as misleading as it may be, appears to be all a noted SEC critic like Kanell needs.

2. Skip Bayless is somehow still arguing that Tim Tebow could be a good NFL quarterback today: I promise you one thing, you will never see any pundit in the entire country campaign as hard for a particular athlete as Skip Bayless has and continues to do for Tim Tebow. Bayless was Tebow’s biggest booster while at ESPN, and continued to argue for him long after everyone else figured out Tebow wasn’t a NFL quarterback. Bayless is also in the very small minority that thinks Tebow can be an effective MLB player instead of a publicity stunt. And this week, he argued that Tebow, a 31-year-old who hasn’t played a NFL regular-season game since 2012 (or a NFL game of any kind since 2015) and has a career 47.9 percent completion mark, could be an effective NFL quarterback today:

"I definitely believe @TimTebow could do at age 31 what he did in 2011 at age 24." — @RealSkipBayless pic.twitter.com/Ss34xTarMl

It should be noted that what Tebow ultimately did in 2011 was post a 46.5 percent completion mark, bumble into an overtime playoff win thanks to his defense, lose 45-10 to the Patriots, and then get cut in the offseason. And it’s hard to imagine that he could do even that well now. Skip, I hope you brought enough of whatever you’re smoking to share with the class.

Always smart for a media member to comment on a person they don’t 1)know 2)cover 3)have any relationships with people who have worked for or played for said person https://t.co/wAhhlfWpmu

What’s great about that is that Gottlieb does all of that every day about a whole lot of people. Oh, and that’s all demonstrably false:

1. I covered him at Florida.
2. Interviewed him one on one.
3. Know some of his players and talked them extensively.
4. His stint at Florida was one of the most corrupt in CFB history.
5. He covered up terrible domestic abuse at Ohio State.
Stick to basketball Doug. https://t.co/mgOf8JBrKQ

Gottlieb went on to further stupidity a couple days later, this time commenting on Baker Mayfield’s comments on Hue Jackson:

Somebody that was in Tech’s locker room, lost his starting job and went to Oklahoma to have a great career night not want to come off as a complete and total d—k https://t.co/61pNbWVVnc

This is not Gottlieb’s first trolling of Mayfield, bringing up his attempt to run from police over a public intoxication charge:

That’s pretty funny, considering that Gottlieb’s own past involves stealing teammates’ credit cards, and that he tried to convince everyone he’s learned from his mistakes and shouldn’t be forever judged by them in a piece just a month before this tweet.

But let’s move on to maybe the spiciest take of them all, Gottlieb insisting that none of the criticism of Lamar Jackson (including his own) has anything to do with race, and that the NFL “is not racist”:

?️@GottliebShow: "NO ONE HAS EVER SAID LAMAR JACKSON CAN'T THROW!

It's can he throw accurately? Can he run a huddle? Can he read a defense?" https://t.co/L4zdqSP12d

That link doesn’t work, but here’s that full segment:

It’s just shocking that all there’s all this criticism of Lamar Jackson’s “accuracy” (a 57.0 mark for his college career, 59.1 percent in his senior year, 60.7 percent in the NFL so far), and not as much for someone like Josh Allen (56.2 percent in college, 52.5 percent in the NFL). Absolutely nothing at all to do with race there, eh, Dougie?