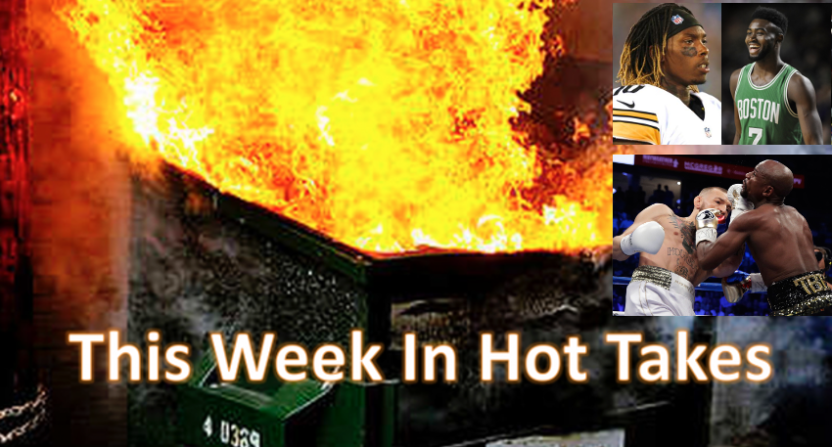 Welcome to another edition of This Week In Hot Takes! This time around, we’re looking at the hottest sports media takes from August 25-31.

5. Bill Cowher and Albert Breer question if Colin Kaepernick still wants to play: In an interview with Evan Sporer of The Sporting News at the NFL on CBS media day Wednesday, Cowher questioned Kapernick’s commitment to the NFL, saying he hasn’t been shouting from the rooftops that he still wants to play:

But what’s also unclear, according to former Steelers head coach and current CBS analyst Bill Cowher, is Kaepernick’s desire to play in the league.
“I’ve not heard from Colin Kaepernick this whole offseason in terms of coming out at this point to me,” Cowher told Sporting News on Wednesday at CBS’ NFL media day. “If I’m Colin Kaepernick I have to prove myself. I would say, ‘I would love the opportunity to show that I am a championship-winning quarterback again, and I understand that I am not going to be handed anything and that I would love the opportunity to come back.’ If he said that it would open the ears of a lot of teams.”

This seems pretty silly. Kapernick seems to have made it quite clear that he still wants to play in the NFL, working out with the Seahawks earlier this offseason and not taking any of the non-NFL opportunities out there (a further career in activism, or in a different league like the CFL). Questioning his desire feels like yet another way to rationalize the NFL’s blackballing of Kaepernick. At least Cowher did so on the record with his name attached, though; The MMQB’s Albert Breer (who’s questioned Kaepernick’s motivation before, both personally and through dubious anonymous sources) decided to give anonymity to a bunch of NFL execs to advance ridiculously self-serving “we’re not blackballing Kaepernick” arguments. That’s an even worse look than what Cowher said.

4. Phil Mushnick thinks Maine should only give scholarships to athletes from the state: Mushnick has expressed some weird criticisms of foreign players in the NCAA before, suggesting that they’re somehow not legitimate students, and he’s at it again. In one of his standard “I miss the good old days” rants Saturday, this time about youth sports in Maine where officials take too much criticism because coaches and parents grew up in an era where TV “already was in a sustained attack on sports”(?), Mushnick decided to say that the University of Maine is bad because, guess what, they give athletic scholarships to kids outside Maine:

But the most dubious recruiter in the state is the University of Maine, a taxes-funded college that recently had to cut $26 million in overhead by reducing faculty in both pay and population.

Ah, but even in Maine, there’s always a bundle to spend on sports.

Maine’s women’s basketball program annually looks like a foreign exchange school taught in a gym. Its full-scholarship roster since just last season has included players recruited from Italy, Croatia, Israel, Sweden, Germany, Spain and Austria. They must have been drawn by that winter climate in Central Maine.

At the same time, the men’s basketball roster has included full scholarship recruits from England, Serbia, Turkey, Latvia and Brazil.

Clearly, then, there’s a critical shortage of kids in Maine who played high school basketball and sure could use a scholarship to earn a college degree.

Just playing high school basketball, being from the state in question, and needing a scholarship doesn’t qualify you to play in the NCAA, Phil. Unless your team really wants to lose. Athletic scholarships are not charity cases. And why is it a bad thing to bring in top athletes from other countries? Last we checked, introducing people to those from other countries and cultures was a benefit for colleges, not a drawback. Unless you’re a xenophobe like Mushnick.

Also, citing this as “a bundle to spend on sports” makes no sense; full-scholarship players receive the same compensation from the school regardless of where they’re from. Handing out charity scholarships to Maine high school players wouldn’t be spending any less. It would just lead to a lot less success, and that would probably actually cost the school; a bad team equals less ticket sales and media revenue, and would thus presumably require more funding to keep going. So, this is a dumb take all around, but that’s far from surprising for Mushnick.

3. Stephen A. Smith tells Martavis Bryant “Stay off the WEEEEEED! Pretty please with sugar on top.” We’ve spotlighted Smith’s ridiculous weed comments before, and now he’s at it again, this time about Steelers’ receiver Martavis Bryant (returning after missing a year thanks to a violation of the NFL’s substance abuse policy):

"STAY OFF THE WEEEEEEED! Pretty please with sugar on top!" ? pic.twitter.com/m4CcWX2drl

This isn’t as deranged as Smith’s previous weed rant on Zach Randolph, but the way he says it is still so ridiculous, and it fits into a long history of Smith trying to tell athletes how to behave, usually with poor results.

2. Shannon Sharpe says Kyrie Irving wouldn’t wind up on the Celtics unless they add Jaylen Brown or Jayson Tatum to the trade: This was quite the hot take from Sharpe, and it would up being proven very wrong, with Boston only throwing in a future second-round pick. If you are into Sports betting, now might be the time to place a wager on the Celtics to make it to the NBA Finals!

"If you want Kyrie, give us Jaylen Brown or Jayson Tatum…No way Kyrie plays for the Celtics next year if that doesn't happen"—@ShannonSharpe pic.twitter.com/ukAtlJDS1J

1. Skip Bayless says “Floyd-loving” ref threw fight, wants McGregor-Mayweather rematch, claims McGregor would win: Sharpe’s debate opponent on Undisputed had many of the craziest Conor McGregor-promoting takes leading up to that fight, including predicting a ninth-round knockout victory, and went well against the grain of the boxing experts and betting lines that saw McGregor as a huge underdog. So, following McGregor’s loss, did Skip admit he was wrong? Nope. He blamed the referee for stopping the fight, and then said McGregor would win a rematch:

"In the 9th round, Conor McGregor was robbed of a chance to win that fight by a Floyd-protecting, Floyd-loving referee." — @RealSkipBayless pic.twitter.com/ziIGGRZk0u

"You better believe I would buy a rematch because Conor McGregor would win a rematch." —@RealSkipBayless wants to see Mayweather-McGregor II pic.twitter.com/bPwAgpDXGb

Congrats on once again having a take no one else in their right mind has, Skippy.