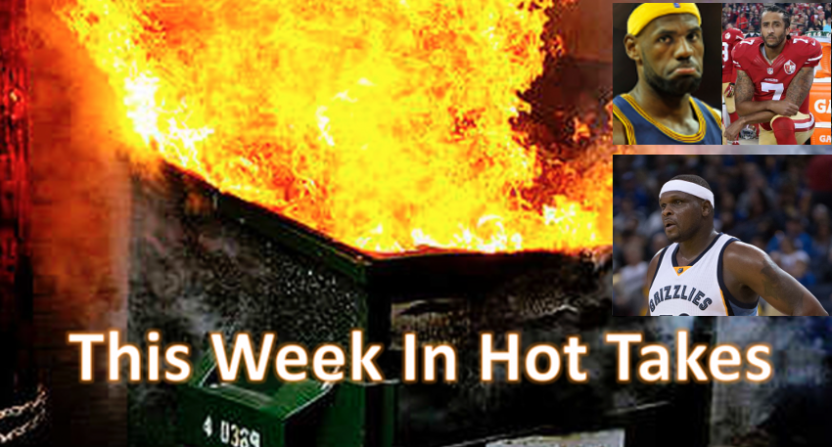 Welcome to another edition of This Week In Hot Takes, collecting the hottest takes from across the sports media world. This time around, we’re looking at takes from August 4-10. Let’s break them down.

5. Shannon Sharpe thinks Jay Cutler “doesn’t have that burning passion to be great”: Sharpe has frequently been somewhat of a voice of reason on Undisputed, but he can drop hot takes from time to time too, and delivered one Tuesday on new Miami Dolphins’ quarterback (and very-brief Fox coworker) Jay Cutler’s supposed lack of passion for football:

"Jay Cutler doesn't have that burning passion to be great…Do you think Gisele has to push Tom Brady out the door?" — @ShannonSharpe pic.twitter.com/bRwSrM7SLT

“He doesn’t have that burning passion to be great. He doesn’t have that burning desire, that love. I’m not sure that he loves football, but I know one thing 100 per cent for certain, he’s not in love with football. In order to be great, you’ve got to love this game, Skip. You don’t need someone to push you out the door. You think Gisele has to push Tom out the door? You think Drew Brees’ wife, or Matt Ryan’s Sarah, I know Sarah, we used to take spin class and work out at the gym together, you think they have to push those guys out the door, Skip? THINK ABOUT IT! Okay, let me give it to you like this. You have a job making X. This new job wants to give you 25 times X. ‘I need 24 to 48 hours to think about it.’ What you thinking about? It’s something you’ve been doing for the last 11 years. But you walked away because, as you mentioned, they either retire you or you lack the desire it takes to play that. He doesn’t love it.”

There are plenty of possible reasons to criticize Cutler, perhaps especially for his anti-vaccination stance, but going in on his supposed lack of love for football is an old and lame approach. Cutler’s long been a national punching bag, but not all of that criticism is fair or deserved, and going after someone’s perceived motivation or lack thereof isn’t a good strategy; it’s one that’s often used to pump up “gritty” sportswriter favorites who aren’t actually good, and tear down good players who don’t act the way certain media members want. By what Cutler’s done on the field, he’s often been a pretty effective quarterback, but he’s had some flaws too. Why can’t we stick to debating his play rather than talking about what’s going on inside his head?

And criticizing Cutler for taking a while to ponder coming out of retirement is odd, too. Yes, this contract will pay him $10 million, which is more than he would have received at Fox this year (but Sharpe’s estimate that it was 25 times what he was making may be a bit high), but heading back to the NFL means a new focus on staying in shape, learning playbooks, and risking injury (with short- and long-term potential consequences). Leaving Fox so soon before the season may also sabotage his future broadcasting career. It’s not as obvious of a decision as Sharpe claims. And Sharpe should know himself; he retired after the 2003 season, the year he turned 35. He probably could have tried to stick around the NFL a little longer, as he caught 62 passes for 770 yards and eight touchdowns that year. Does not trying to wring every possible drop out of his career mean that he didn’t “love this game”?

4. Rob Parker calls LeBron James “the most sensitive of all time”:

LeBron James was once the FFOAT: "Finals Failure of All Time."

Now, he is the MSOAT: "Most Sensitive of All Time."

Parker’s adding to a list of ridiculous acronyms here, previously calling James “finals failure of all time” and also criticizing Tom Brady for being lucky and Dak Prescott for being overrated. “I’ve never seen a star want to be liked more than LeBron.” The silly part here is that James actually isn’t that sensitive; if he was, he’d spend all day every day directly reacting to the gargantuan amount of junk that’s said about him, especially on debate shows like Undisputed. And even this post Parker is citing wasn’t James reacting directly to criticism, but him quoting Meek Mill, saying that “I will never lose” and that critics won’t bring him down. In what world is that worthy of outrage?

3. Skip Bayless says LeBron lost six NBA Finals, not five, and is on his way to “Mount Crushmore”:

This starts with a great open, with Bayless opens with James losing six Finals, and when corrected by Sharpe, says “Oh, well, I’m counting next year’s.” And it then gets even more absurd: “Okay, LeBron has lost five finals. You say Mount Rushmore, but he’s on his way to being Mount Crushmore, because I don’t know if anybody’s going to be crushed more than LeBron. He’s on his way to Jerry West territory, who lost eight Finals.”

Wait, so Jerry West is bad now? And judging James for five Finals losses is absurd, especially considering that he’s not the only player on the court, that he has three championships and three Finals MVPs to go with those losses, and that he’s frequently been the best player in the series even in losing causes. Also, making it to the Finals is not a bad thing; James has gotten there in eight of 14 seasons, and in eight of the 12 years where his team made the playoffs. Bayless loves to bring up “Michael Jeffrey Jordan” and his 6-0 Finals record, but Jordan only made the Finals six times in his 15-season career, and six times out of the 13 seasons his team made the playoffs. So Jordan’s playoff record is better because his losses came in earlier rounds than the Finals? That’s absurd. To say nothing of trying to use “Mount Crushmore” as a derogatory term.

2. Phil Mushnick thinks Colin Kaepernick is being “shunned for cause”: Mushnick’s column from Thursday is remarkably absurd on a number of fronts, such as his whining once again about late starts and insisting that baseball would be better served if less of it was televised in primetime, but it’s his Kaepernick take that’s particularly out there. Most Kaepernick critics have argued that he’s only not signed because he isn’t good or isn’t committed, which is absurd in its own way, but Mushnick skips right past that and says the NFL is right not to sign him because of his peaceful protests:

In other words, if Colin Kaepernick has the right to exploit national anthems played before NFL games to display his disgust with America, why don’t NFL teams that also rely on customers appalled by Kaepernick’s protest, have the right to counter-protest by not signing him?

How many of us can use our employer’s workplace to unilaterally conduct any kind of attention-generating political or social protest?

Well, I don’t know, Phil. Your whole history as a New York Post columnist is an attention-generating political or social protest that things aren’t as great as they used to be back when sports were barely televised and filled with scrappy, gritty white athletes who hustled to first base, didn’t celebrate and “played the game the right way.” So maybe you shouldn’t be lobbing stones from that glass house.

1. Stephen A. Smith says Zach Randolph “could not stay off THE WEED!”:

“I’m shocked at the stupidity of him finding himself in this situation. I won’t go off about THE WEED just yet.” But it gets really good when Smith does go off about Randolph and THE WEED, around 1:47. “Cause evidently, he could not stay off THE WEED! I’m disgusted with it to be quite honest with you, and I’m ashamed that he found himself in this situation. He’s got to deal with this blemish, it’s on him.” The cut to Smith yelling at Max Kellerman (2:05) about this is excellent too: “You were on Memphis all these years, you just signed a two-year, $24-million deal to go to the Sacramento Kings, so you are en route to Cali, that’s where you’re about to play, and YOU CAN’T WAIT?! YOU CAN’T WAIT UNTIL THE LAWS ARE MODIFIED, ULTIMATELY, TO A DEGREE WHERE YOU DON’T HAVE TO WORRY ABOUT THIS? YOU DON’T SIT UP THERE AND BLEMISH THE LEAGUE, YOU DON’T BLEMISH YOUR FUTURE EMPLOYER, YOU DON’T BLEMISH YOURSELF WHEN YOU KNOW WHAT THE DAMN LAW IS!”

Smith then tries to argue that he doesn’t criticize rappers who smoke pot, but is criticizing this because it could cost Randolph money, and Kellerman rightly notes that it’s probably just likely to lead to a not-massive fine for him. The way Smith really dials up the outrage here is amazing. And there’s a great part around 3:53 where Smith just keeps yelling “ARE YOU BREAKING THOSE STUPID LAWS? SPEEDING? SPEEDING? SPEEDING? SPEEDING? SPEEDING?”