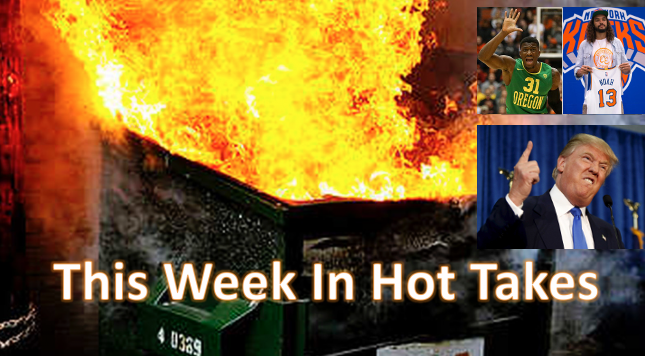 In a world that has embraced debate, there are many hot sports takes out there in any given week, and they’ve been termed “one of America’s greatest exports.” But which takes can stand out in that crowded environment? And which personalities consistently bring the most heat? That’s what we’re tracking in This Week In Hot Takes, counting down from the fifth-hottest to the hottest. We’ll be keeping an ongoing leaderboard where we’ll eventually crown a king or queen of Hot Takes. Here’s the latest edition covering Nov. 11 to 17, from your friendly neighborhood keyboard bully…


5. Phil Mushnick says Dylan Ennis’ transfers leave a “suspicious stench”: After rambling on about Tommy Tuberville and Ryan Fitzpatrick in his New York Post column Saturday, Mushnick comes up with a fiery take on Oregon point guard Dylan Ennis, essentially accusing him of taking money to play because he’s older than some college students and has played at other schools?

On Nov. 21, the University of Oregon is scheduled to play in a basketball tournament in Hawaii — along with Georgetown, Tennessee and Wisconsin — on ESPN. Given that ESPN is loaded with college basketball experts, surely one of them will explain the academic and athletic presence of Oregon/“University of Nike” guard Dylan Ennis.

Ennis — who is from Ontario, Canada, where he still lives — turns 25 next month. He previously played college ball for Villanova, and before that, Rice. He soon will be 25, and he has played for colleges in Texas, Pennsylvania and Oregon.

Despite the suspicious stench from all this, I’m sure ESPN’s college “insiders” — Jay Bilas, for example — will be able to sort it all out and make complete, honest sense of it, while assuring viewers that either way, ESPN money is not party to any of it.

First off, playing at least a year or two of high school ball away from where you live is something that many top Canadian players (including Andrew Wiggins, Anthony Bennett, Nik Stauskas, and Dylan’s brother Tyler) have had to do to get themselves on the NCAA radar, and that alone is a ridiculous reason for criticism. Beyond the Canadian connection, top prep schools are also a part of the shifting landscape for top American players, and while that’s received deluded criticism from those who think they should all stay at home like in the good old days, there isn’t anything necessarily wrong with it (and implying someone’s getting paid and risking NCAA eligibility just because they go to school in a different area is insane).

Moreover, why are Ennis’ transfers a subject for criticism? Players transfer for all sorts of reasons, and Mushnick’s apparent attempt to suggest that Ennis did so for money from Oregon is a serious allegation without any proof. Ennis says he left Villanova for Oregon before last season (he could play immediately, as he was a post-graduate transfer) to find a program where he could play more of the traditional point guard role (something Villanova was moving away from) and hone his skills for a potential pro career. How isn’t that a reasonable desire? It didn’t work out great for him last year, as he broke his foot and missed most of the season (while Villanova went on to win the national championship), but he was able to get an injury waiver from the NCAA for a sixth year of eligibility this season. Ennis has a degree and has found a school that will hopefully help him prepare for the pros. The only “suspicious stench” here is from Mushnick’s column.

4. Phil Mushnick thinks Joakim Noah can’t be anti-war because his father’s French: Mushnick managed to pull off a first for this column, making it in twice by dropping two incredibly heated takes in one week. He followed up his Ennis rant Saturday with a piece about the New York Knicks being unlikeable Sunday, which included an absolutely bizarre section on Joakim Noah and his opposition to war:

Then there’s new Knick Joakim Noah, the easy-to-anger anti-militarist who refused to attend a team meal with cadets at West Point.

Wednesday, in a Veterans Day salute, he was the one Knick who didn’t wear game-issued, NBA “Hoops for Troops” socks.

Is there no one in Noah’s milieu — Phil Jackson, perhaps — to explain to him some indisputable facts of life, specifically his?

Noah’s a first-generation American of a black French father. Is he unable to consider what would be if not for the combined Allied forces’ Normandy invasion of June 6, 1944, the start of the liberation of France from the master race, genocidal Nazis?

Or would Noah have condemned such a military operation? Would he, and his father before him, have even been born — or born free — had it not been for the US military, thousands of men, including West Pointers, buried in France, many in graves marked “Known Only To God”?

And so the one Knick who should get it far more than the rest is the one who doesn’t get it at all. It’s nauseating.

No, Phil, what’s nauseating is your insistence that people should think a certain way because of their background, and your conclusion that not publicly demonstrating support for today’s American military is an insult to all American military actions throughout history. Were people who protested U.S. involvement in the likes of  Vietnam and Iraq condemning D-Day? Of course not. This is comparable to Erril Laborde telling Colin Kaepernick he doesn’t know (a very twisted version of) U.S. history, and it’s almost as ridiculous. Even if Noah’s pacifism extends to force never being justified for any reason (which he doesn’t appear to have stated), he’s entitled to that view, and he shouldn’t be forced to support military causes he disagrees with. Oh, and suggesting that Phil Jackson should explain “some indisputable facts of life” (they’re not) to Noah? That will go over well. We’ve seen how great of a job Jackson has done in racially-charged conversations lately.

3. Dan Dakich’s rant about LeBron James: Dakich, who’s had plenty of ridiculous anti-athlete opinions before, came out with another doozy Thursday, going on a day-long rant about how LeBron and other athletes are soft compared to regular workers based on the amount of game time they log. Here are the lowlights:

How dumb is this..cops coal miners steel workers teachers do their job every damn day.. https://t.co/Pw6DsrkMU8

Never ceases to amaze how general public doesn't get that the American worker works far more/harder than an athlete..cmon fanboys b smarter

First off, that’s disregarding all the other work athletes put in, including practices, strength and conditioning work, team meetings, individual film review, mandated press conferences and interviews and more. It’s also disregarding the specific challenges and restrictions of being an athlete; the average worker doesn’t have to show up in top physical condition each day, doesn’t do their job before an audience of eager-to-criticize millions, doesn’t spend much of their year with constant travel away from home, and doesn’t have to worry about their every action being in the public spotlight. But even if “the average worker” had a job that was actually harder (which it’s certainly not on average; particular professions might possibly be more difficult, but that’s all about how you measure difficulty), that still would be no reason to criticize athletes. At least Dakich is smart enough to not bring in the supply-and-demand ignoring “cops should make more than athletes!” argument typically associated with this line of thought, but this is still a dumb take.

For some reason, Jason Whitlock thinks Gregg Popovich, Mike Evans, Stan Van Gundy, Steve Kerr and others are wrong to criticize the election of Donald Trump:

This includes the phrase “twoke social justice warrior” and a whole lot of other stupidity, including that Evans’ vote would have made a difference (Florida wasn’t won by one vote, Jason), that Popovich and other coaches can’t criticize Trump because their candidate lost (criticism of elected officials is very much a thing, and a valid one, Jason), and much more. The really astounding thing is that Whitlock still has a national platform for some reason.

1. Clay Travis thinks athletes should stay out of politics:

Notable absences: Skip Bayless, Shannon Sharpe, Stephen A. Smith, Colin Cowherd. Whitlock and Travis continue their one-two domination of the standings, but Mushnick’s double moves him up into third. And welcome to the column, Dan Dakich! Another note; this is the first time in a while we’ve had no takes specifically on Colin Kaepernick (although Whitlock mentioned him), which is a nice change of pace.