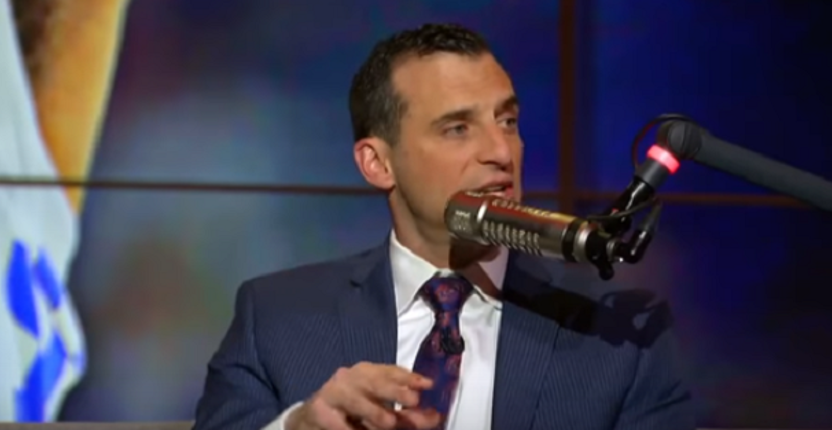 Back in 1996, Doug Gottlieb left Notre Dame after a controversy surrounding him stealing other students’ credit cards. Gottlieb went on to success at Oklahoma State and in some smaller professional basketball leagues before beginning a broadcasting career in 2002, and he’s since worked for ESPN, CBS and Fox (the latter since March 2017), but the credit card theft still gets referenced.

That’s especially true when Gottlieb decides to comment on others’ character, something he does regularly. He’s unloaded hot takes on everything from paying NCAA players to college basketball tripping relative to NFL off-field DUIs to a sexual assault lawsuit as “a money grab” to Dominican baseball players cheating to Michael Bennett’s story to DeAndre Hopkins being “not smart enough” to understand Bob McNair’s inmates/prison comments.

Interestingly enough, Gottlieb has now spoken out about his own past with credit card theft, writing a piece for The Athletic about what happened and why, and its relation to this fall’s story of UCLA players shoplifting in China. The whole thing is worth a read, but perhaps particularly notable here are Gottlieb’s comments about his own mistake and the connections to the UCLA story:

Last Nov. 10, three UCLA Bruins were caught shoplifting sunglasses during the basketball team’s trip to China. The criticism of those kids came hard and fast, always underscored by a seemingly simple question: How could they be so stupid?

I knew, however, that the question was not so simple. That’s because 22 years ago, I did something stupid. And I knew exactly what those kids were feeling, because I will never forget how I felt when I got that fateful phone call exposing what I had done for all the world to see.

… I had done this to myself, all by myself. I was tormented by that one overriding question: How could I be so stupid?

…As I look back, I am appalled at my behavior. Why did I do it? I can blame depression or whatever else was bothering me about Notre Dame, but here’s the real reason: I thought I could get away with it. I felt invincible. I had cheated on tests and been caught a few times, but I was always let off the hook. Besides, I rationalized that I was stealing from kids who had rich parents. I never stole from my roommate, partly because I knew his family didn’t have a lot of money. I also never stole from my teammates. All of that just rationalized my selfish behavior. None of it makes what I did OK. I was a thief. Period.

…So if I could talk to those UCLA kids who got caught shoplifting in China, I would say this: Do the right thing, bide your time and try to leave what happened behind. There’s no point trying to forget, because the world will never let you. But hopefully, your mistake will change you for the better, just as mine did.

It’s notable that Gottlieb is willing to address this in detail, as the piece goes through what he stole and how, plus the fallout (including his discussions with Notre Dame coach John MacLeod, his eventual transfers to Golden West College and then Oklahoma State, and his legal situation, which included pleading guilty to a misdemeanor, paying a $500 fine, around $2,500 in restitution, and $5,000 in court costs, and agreeing to see a therapist).

The transparency is appreciated, especially as Gottlieb now comments on other athletes for a living, and often wades into the character realm; he has more credibility with this story out there and addressed from his perspective than left alone. And the way he ties this to the UCLA shoplifting case has merit, offering perspective on the “invincible” way he felt and the “stupid” decision he made.

But where this may lose some of its impact for some readers is with how Gottlieb’s still complaining that people mention this about him, and how he doesn’t seem to have always applied the lessons from this to his comments on others.

I live a pretty public life. I host a nationally syndicated radio show, I’m on various TV shows and I call college basketball games on radio and television. I am also active on social media. Not a week goes by that someone doesn’t send me a tweet or a message calling me a credit card thief.

I’d be lying if I said I loved it. I did a lot of stuff before, and I’ve done a lot of stuff since. I don’t understand how some people can live so far in the past, especially when it’s not their past. It’s been 22 years. Whatever the statute of limitations is on college-age stupidity, I believe I have exceeded it. But I understand there are many people who will never let me forget. That’s reality.

…There’s no point trying to forget, because the world will never let you. But hopefully, your mistake will change you for the better, just as mine did.

More than two decades later, I have kept just one item from those trips to the mall – the gold bracelet. It resides in the top drawer of my nightstand, next to my bed. Angie has never asked me about its meaning. I have only worn it once, when I covered the 2013 Final Four for CBS. As I sat on that set, I could look down at the bracelet and remind myself of how far I had come, and how much I had overcome. And if you think it’s wrong that I kept something that I didn’t pay for, I respectfully disagree. Remember, I had to give the money back at 2½ times the original price. Then there were the other costs: my scholarship, my career, my reputation, the diminished respect of my teammates, friends and family.

So yeah, I paid for that bracelet. I’m still paying for it.

Yes, many people do dumb things in college. Yes, many broadcasters have arguably made even worse mistakes and faced more serious charges than Gottlieb has, and yes, some of those stories aren’t mentioned as frequently as Gottlieb’s credit-card theft. It’s understandable why that’s annoying to him, and perhaps not all the references to it are fair, especially if they’re made in a context that isn’t particularly connected.

But many of the times this is brought up are when Gottlieb dives headfirst into the character-judgment waters, especially with cases like where he said Adrian Beltre may have cheated with no proof beyond “Dominican culture“. Gottlieb admitted to theft, and while he can be annoyed that people still bring that up, that is proven fact versus the cases where he’s cast aspersions on others’ integrity with no evidence.

Of course, none of that means that Gottlieb shouldn’t have a job because of a misdemeanor he committed over two decades ago and has since legally atoned for. His quality as a broadcaster can be debated, but his employers have all known his history, and they’ve decided he’s worth employing. This also doesn’t mean it’s fair to mention the credit-card theft in every single reference to Gottlieb. And it’s positive that he appears to have learned from his mistake personally, that he doesn’t seem to have been in legal trouble since, and that he can display some empathy for the UCLA players with these comments.

But this kind of reflection would be more praiseworthy if Gottlieb applied its lessons elsewhere and showed empathy for other athletes. Maybe, given what’s happened with him, he shouldn’t be so quick to accuse whole countries of cheating, or to say that particular players aren’t smart enough to understand owners’ comments, or that athletes or athletes’ accusers are lying.

Gottlieb doesn’t have to do that, of course. He’s paid for his opinions, and if he wants to offer hot-takey opinions judging other athletes and their character, he’s certainly within his rights to do that. He shouldn’t be surprised if that leads to people bringing up his own past, though.