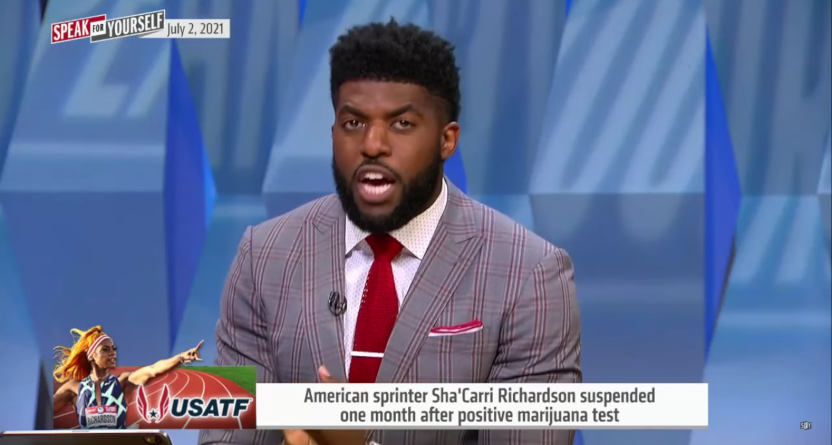 U.S. sprinter Sha’Carri Richardson won the 100-metre event at the U.S. Olympic Trials last month, but was then disqualified following a positive test for tetrahydrocannabinol (THC, the main psychoactive compound in marijuana). That’s led to her accepting a one-month ban from the U.S. Anti-Doping Agency, which will keep her out of the Tokyo Olympics’ individual sprinting events (she could still possibly compete in relay events if selected). And that’s led to a lot of discussion, from “Recreational marijuana is legal in 18 states, including the one where Richardson took it, and is not performance-enhancing, so testing for it and punishing athletes for it is silly” to “It doesn’t matter what state rules are because athletes agree to separate rules.”

The most ludicrous take of all, though, may have come from Fox Sports SFY co-host’ Emmanuel Acho. Acho suggested that track and field can’t “legalize” weed (wrong terminology; they don’t make laws, but they could remove it from the lists of banned substances and substances tested for) because of what that would mean for javelin-throwers.

Legalizing weed in track and field competition is all good if you’re running in a straight line.

Legalizing weed in track and field competition is terribly dangerous if you throw the javelin.

Where do we draw line.

First, congrats to Acho on also writing an incomplete sentence at the end there (he’s missing a “the.”). But beyond that, this isn’t particularly a question of using marijuana in competition, which as many have noted would likely be rather detrimental to performance. Unlike, say, a blood-alcohol test, current urine tests for THC do not tend to pick up if the person is currently impaired, but rather if there’s any THC still in their system. In urine tests, that tends to be for THC consumed within the last three to 30 days, as per a 2008 Mayo Clinic article that’s still widely cited. But those tests can produce positive results even after that.

As that last linked Global News (Canada) article indicates, too, “impaired” guidelines tend to be for usage within six hours. That doesn’t fit with when Richardson said she took marijuana (as a coping mechanism after finding out her biological mother had died), and there’s no evidence to contradict her claims given how long THC can last in the body. But Acho doubled down with a claim that she was impaired when running (which would, frankly, be astonishing), referencing uncited “reports,” and claiming that “it is only tested during the competition” (false, because, as mentioned above, consumed THC can still be detected for 30 or more days under the current methods used).

That’s literally what reports say happened. It is only banned during the competition.

These takes led to some quite funny roastings:

I heard black lives matter was hunting police down with javelins this is a real problem, primarily in our cities due to fatherless youths #truth indeed

Acho’s claim here is ridiculous on its face. It seems highly unlikely that someone would be dumb enough to try and throw a javelin while impaired, and to have that impairment for an event that determined if they would go to the Olympics or not. Oh, and beyond that, there don’t appear to be current rules in most sports prohibiting competitors from competing despite “legal” impairment with alcohol (which seems more likely to have actually happened, especially with the numbers of pro athletes who have talked about abusing alcohol, including before games). Making this about impairment during competition is ridiculous, especially with no evidence that that’s what happened here.

And it’s notable that most North American professional leagues have moved away from offseason testing for marijuana entirely, while also lessening violation penalties. Some don’t test for marijuana at all and never have, despite public criticisms from the moralizers at WADA and USADA (who are some of the few people still trying to push penalties for marijuana in sports, and who are only really finding success with that at the Olympic level at the moment); more and more leagues are moving towards that approach. So a change in USA Track and Field policies, or wider USADA polices, actually would be more in line with a lot of U.S. sports.

So, this isn’t actually about impairment while competing. But even if we presumed that someone did actually try to throw a javelin in an Olympic trials while under the influence of marijuana, that still probably would not lead to a death. Yes, there have occasionally been javelin accidents, and yes, there have occasionally been deaths linked to javelin injuries (often from subsequent infections, though). But the biggest issue in those cases has usually been not about the javelin thrower, but rather about officials not keeping the area properly clear. Regardless, the current testing regime has nothing to do with preventing impairment during competition in any case. It’s about catching people  for previous use after competition. And Acho’s discussion of  this is a ludicrous take that has him fitting right in with some of his worst colleagues at Fox Sports, like the one trying to make a story out of LeBron James not going to a Clippers’ game.

Speaking of that, the dumbness here wasn’t limited to Twitter, as Acho also brought this up on air, and claimed that marijuana could be performance-enhancing because “it subtracts a negative”:

They don’t just make you better. They can also keep you from getting worse. pic.twitter.com/rbFF7fogeX

This is particularly notable, as Acho’s 2020 hire at Fox has often been cited as a claim that their sports channel is moving towards more thoughtful and enlightened discussion and away from ridiculous debate. But, despite regular promises of that from Fox leadership, that’s not actually happening.

Yes, Acho’s SFY shows with Marcellus Wiley are probably less silly overall than those conducted by predecessors Colin Cowherd and Jason Whitlock. But these kinds of ridiculous and uninformed takes that completely miss the point of the discussion and instead delve into reductio ad absurdum situations that haven’t and probably won’t happen could easily have aired on the previous SFY, or on The Herd, or on Undisputed.

Regardless of what else Acho has done in the past, his comments on this topic have him showing that he’s currently a good fit for FS1’s brand of “debate.”  It’s not about who can present a thoughtful or an informed opinion, but rather who can come up with the most-talked-about take, regardless of if that has anything to do with the facts. And while Acho is far from alone as a sports personality who displays idiotic and counterfactual opinions on marijuana, it’s disappointing to see him joining that much-too-large crowd.