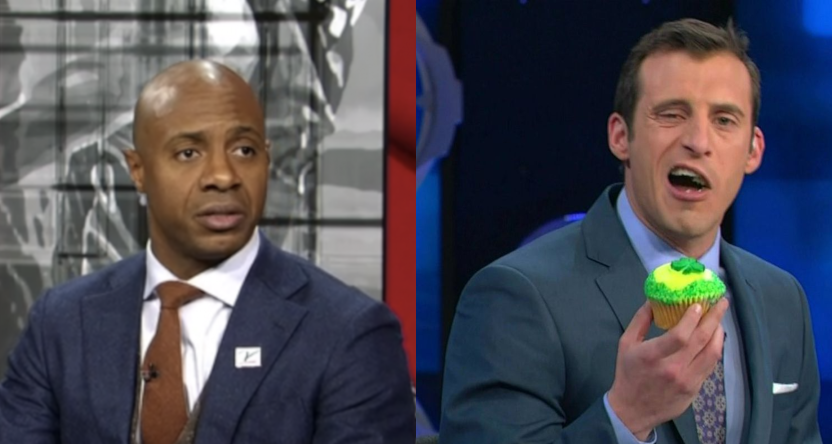 There are a lot of dumb takes that come from FS1/Fox Sports Radio personalities in general and from Doug Gottlieb in particular, but Gottlieb managed to top himself Monday with a take that wasn’t just bad, but was also easily refutable. Plenty of people sounded off about California governor Gavin Newsom signing a bill to allow college athletes to get paid for endorsements, and Gottlieb had a particularly terrible take on that, arguing (in response to Geoff Schwartz of Sirius XM/SB Nation/ESPN Radio) that “there is no real value in a college kids [sic] name and likeness” and “ratings for TV, values of schools to networks depend on the brand of the school, not the athlete”:

Gottlieb was mocked by a lot of media people for this, and ESPN’s Jay Williams had one of the best responses:

How do these things keep coming out of your mouth Doug? ???‍♂️ Programs aren’t anything without the kids that help make it. #Deadwrong https://t.co/vTTB9PR1lp

First off, the “there is no real value in a college kids name and likeness” argument is ridiculous, as if that was the case, the NCAA wouldn’t need to have rules prohibiting those athletes from making money off the usage of their name and likeness. There are a whole lot of businesses that would love to be able to feature specific college stars; if Gottlieb’s “no real value” argument was true, that demand wouldn’t exist.

And while some college sports viewership certainly is about the school (yes, many people watch the school they attended or have some other connection to), that’s not irregardless of the players the school has; teams tend to draw better ratings when they’re doing well, so players clearly matter from at least the competitive side. And that’s before you get to superstar players who really drive interest and ratings in a school.

In fact, Gottlieb, who’s seemingly a college basketball pundit (but in reality, he isn’t much better there than he is at anything else despite his playing experience) should be well aware of that given the Zion Williamson case just last year. Duke’s ratings, ticket sales, and general interest (including social media numbers and celebrity visits) were all way beyond what they were in an average season, and a lot of that was due to Williamson (who even had a camera specifically devoted to him during some games). Williamson also had the advantage of being a hugely-prominent star before he ever came to Duke, and while his time with the Blue Devils certainly elevated his profile further, it’s absurd to argue that “there’s no real value” in his name or likeness. Yes, Williamson got some exposure benefits himself from his time at Duke (although there’s debate about how necessary that was, as some think he may have been able to follow the high school-to-NBA path of a LeBron James or a Kobe Bryant if the current rules didn’t block that), but the school got a whole lot of value from having him instead of some other random player who wasn’t as good or as notable.

The Williamson case also illustrates another compelling part of when individual college athletes matter for ratings; when it comes to the draft. Some college basketball and college football viewing is from people who don’t necessarily care about particular teams or even the sport as a whole, but are rather interested in seeing the top prospects for the upcoming professional draft. And that leads to lots of attention on those athletes’ schools and lots of ratings. Remember tanking campaigns like “Suck For Luck” and “Tank For Tua,” or the tanking that went on in the NBA around Williamson last year? But sure, there’s no interest in those athletes’ name or likeness at the college level, and the ratings just depend on “the brand of the school.”

This also is notable with athletes who put up impressive individual campaigns and get attention for individual awards. Consider Johnny Manziel at Texas A&M in football, or Trae Young at Oklahoma in basketball; neither of those schools was ever firmly in the national championship picture during those players’ tenures (A&M went 11-2 in 2012, Manziel’s first season on the field, and just 9-4 with him the following year, while Oklahoma lost to Rhode Island in the first round of the NCAA tournament in Young’s only season, 2017-18), but both teams got a whole lot of national attention thanks to their individual stars. And as a result, both teams’ games did a lot better in the ratings than you’d expect given their on-field performances.

Where Gottlieb actually has a minor point is the “values of schools to networks,” as TV contracts with conferences and individual schools (in the cases of Texas, Notre Dame and BYU) don’t generally cover specific athletes; they can’t, as these are multi-year deals that usually extend beyond any player’s individual career. But even those contracts consider the schools’ players, albeit less directly; schools like Texas and Notre Dame, or conferences like the SEC, can get big deals because of their expected on-field performance, which has a lot to do with their expected recruiting performance. If, say, Texas just threw a bunch of unrated recruits out on the football field and went 0-12, they wouldn’t be getting big TV deals for long. So even those TV deals are considering the value of the players each school is projected to field; they’re just doing so in general terms rather than for specific players.

All in all, Gottlieb’s again showing his brand of insane takes off here. But it’s refreshing to see him called out not just by sports fans, but by other prominent figures in the media world. That helps reinforce how absurd a character Gottlieb is, and how ridiculous it is for Fox to continue to give him a national profile. But while he has that national profile, it’s nice that big names are pointing out how silly his arguments are. It was Jeff Passan back in 2017, Troy Aikman a few weeks back, and Williams now; who’s going to be the next one to deservedly dunk on Gottlieb for a ludicrous take?