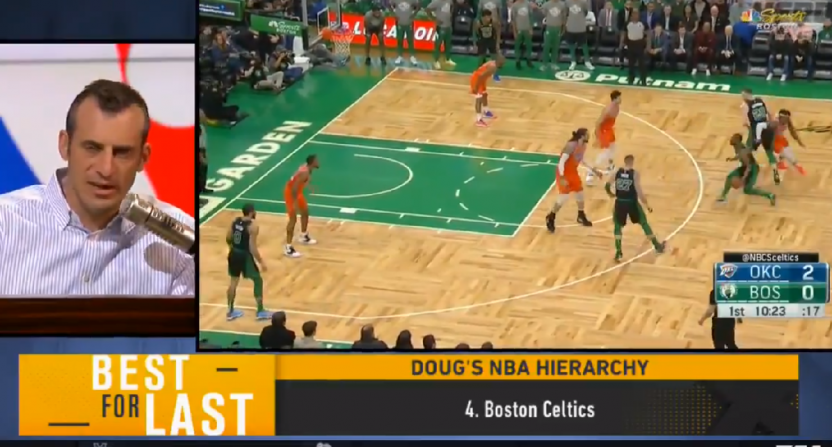 On FS1 today, Doug Gottlieb spent some time ranking NBA teams as he filled in for a literally injured Colin Cowherd.

Not into selfies (Look at me. Would you be?). But I’m not on vacation. Had an accident Sunday night. I’m fine. Want to thank the AMAZING staff at Little Company of Mary Medical Center & Manhattan Beach Fire/Rescue. At my house in 3 minutes after the call. Total pros. Back soon pic.twitter.com/KoW13B7ay6

That would not in itself be notable in any way except for this: when he got to the Boston Celtics (at #4, if you’re curious), he somehow started talking about Kyrie Irving, who is very much not on the team anymore.

Doug Gottlieb thinks Kyrie Irving could help the Celtics make a push during "winning time" in the playoffs. Yes, this is from today. pic.twitter.com/CACNpV8V4b

“Celtics: they’ve been worse since getting Kyrie back. I still think you get to winning time in the playoffs, you’ve got Kyrie. Jayson Tatum went on that heater, part of the reason he went on the heater was he didn’t have Kyrie taking up a bunch of the shots.”

So, the question: does Doug Gottlieb actually think Kyrie is still on the Celtics

The likely answer: no, of course not. Presumably he meant Kemba (Walker), and had his “starts with a K” Celtics scoring point guards mixed up. He never says “Irving”, for example. But he does say “Kyrie” three times, and as Gottlieb is one of the easiest to dunk on people in sports media, it’s fun to do that when the situation arises.

And it’s really just a matter of figuring out why we’re laughing here. It’s funny enough that he did it three times even knowing it was just a slip of the tongue.