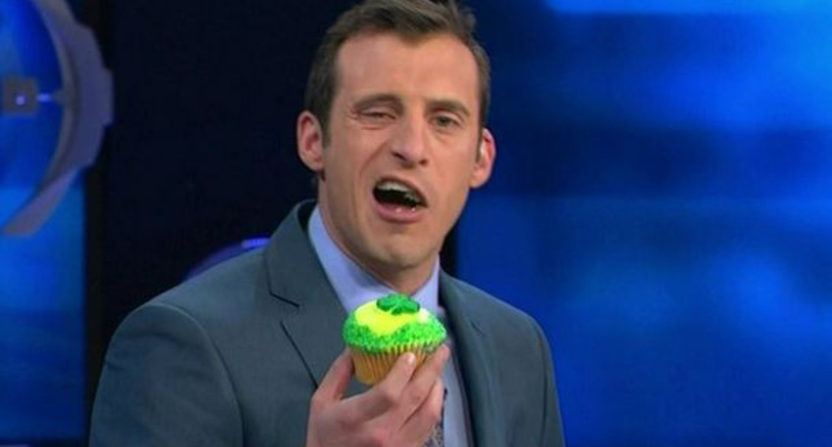 Long before he went from CBS to Fox Sports in March, Doug Gottlieb was already known for his feuds with coaches and his occasional hot takes, but most of his takes were tied to college basketball in some way (apart from a really bizarre allegation that the civil lawsuit accusing NBA star Derrick Rose of rape was a “money grab“).

Since that move, though, Gottlieb has cranked up the college athletics hot takes, and he now seems to be branching further and further afield and delivering the takes Fox is looking for, providing ridiculous opinions on everything from baseball to the NFL.

Gottlieb really managed to get a reaction this week when he raised questions about Texas Rangers’ third baseman Adrian Beltre following Beltre’s 3,000th hit, saying Beltre’s birth in the Dominican Republic suggests that questions should be asked about if he’s used performance-enhancing drugs. He started this on Twitter Monday:

Adrian Beltre with VERY rare offensive explosion in his 30s – forgive me if I wonder ???

Yep, that’s the good old “gotta ask the question” right there (with a nice ratio to boot), and Gottlieb then followed up on his Fox Sports Radio show by making it more explicit that he was talking about PEDs and saying that Beltre’s country of birth means he should be questioned. This got a lot of attention Tuesday when the Fox Sports Radio account tweeted it with quite the graphic:

The full clip is available here, in a piece headlined “Not Outlandish to Assume Adrian Beltre is a Cheater”:

“I’m not saying Adrian Beltre unequivocally did it, I’m saying, ‘hey, we’ve all been fooled before’, and we have some markers that could paint the tale of a guy who could possibly be ahead of the curve and hasn’t tested positive for it.”

“It’s legal, it’s over-the-counter, and there’s a different culture there than there is here. There is a high percentage of baseball players that have tested positive that are from the Dominican Republic. If it’s a stereotype, it’s created upon the actual statistical data that a high percentage of the players who have been suspended from Major League Baseball for testing positive for PED’s came from the Dominican Republic.”

This makes Gottlieb at least the second Fox personality to make horrible generalizations about Dominican ballplayers (remember, bashing the education system there led to Colin Cowherd’s suspension at ESPN and eventual early exit for Fox). And it didn’t go well for him. Deadspin delivered a pretty nice graphic making fun of the Fox one, filled with headlines about how Gottlieb was charged with felony credit card theft during his college days (which led to him getting kicked out of Notre Dame):

Sports Illustrated’s Richard Deitsch made a point about generalizations:

As did Mike Vaccaro of The New York Post:

Also, if one college basketball player steals his roommate's credit card, then all college athletes are thieves. https://t.co/7OZOQru5QS

And Yahoo’s Jeff Passan weighed in with a long thread pointing out that yes, some Dominican prospects have been given PEDs, but presuming that means Beltre is using is ridiculous:

He is right about the D.R. and PEDs. A disproportionate number of those from Latin American countries, particularly the D.R, get suspended.

Assigning some sort of behavior to Adrian Beltre based solely by the country in which he was born is the epitome of illogic and laziness.

Journalist, radio host, fan. Whatever. Fairness isn’t a goal, it’s a necessity. Otherwise, crap like this only serves to make us all dumber.

Gottlieb then responded a couple of times, and the two went back and forth:

Wondering about someone's production when past players have made us look foolish is not crap. An entire group of journalists overlooking is https://t.co/bajgvsP3sq

So baseball journalists 20 years ago not investigating a supremely-hard-to-pin issue to your liking gives you room to baselessly speculate? https://t.co/vxVlwCGRei

I'm wondering if you've been drinking. A lot of sports-talk radio hosts that have alcohol problems and bad takes.

Gottlieb wasn’t going to go away quietly, though. He tried to defend himself on air, but mostly doubled down:

.@GottliebShow has a message for all of you out there he wants you to hear LOUD and CLEAR. pic.twitter.com/GO29yzJIDM

He also went after Deadspin:

Hey @DeadSpin, if you want to bring up "Credit Cards" when you're talking about @GottliebShow and Adrian Beltre, you are the problem: pic.twitter.com/v8Z13mQebv

Gottlieb then got Passan on his show, and the two continued their argument there:

It should also be noted that this was far from Gottlieb’s only hot take of the day; he also dropped a scorcher on Colin Kaepernick:

What you say in public isn't always what you really think.@GottliebShow is LIVE talking about Kaepernick: https://t.co/uadRU1iTWd

Having Gottlieb drop napalm-level takes on MLB and NFL topics and promptly get yelled at by much of the media world probably wouldn’t be a desirable content strategy for most outlets, but it fits right in with what Fox is trying to do. These takes aren’t well-informed or well-reasoned, but they certainly get a reaction. And doubling down on them despite criticism gets Gottlieb more attention, even if it damages his credibility.

However, these takes are also proof that Gottlieb is continuing to evolve from “occasionally controversial college basketball analyst” to “all-round hot take artist.” That may make him a better fit still for Fox, but it hurts his credibility in the wider media world. And if he keeps launching takes at this level, he may enter the Jason Whitlock Phantom Zone Of Irrelevance, where everything you say is so outlandish that no one bothers to listen to you. We’ll see if Gottlieb winds up there.