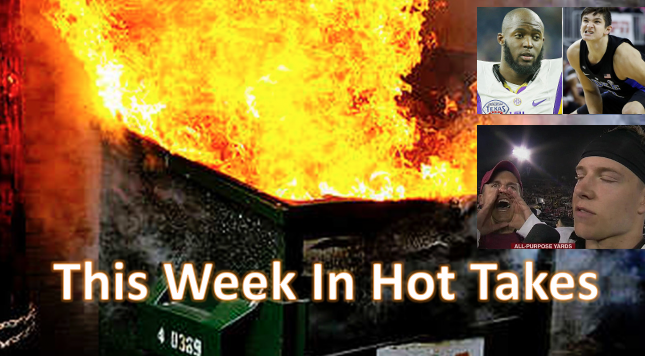 Welcome to A Very Special Episode of This Week In Hot Takes, featuring five piping-hot takes on various college athletes from the week of Dec. 16-22. Bleacher Report’s Mike Freeman summed up these overall takes (which extend far beyond the five named here) pretty well:

All the people who make massive amounts of money off college football want players to play for love of game.

Let’s get to the hot takery:

5. Danny Kanell compares Christian McCaffrey and Leonard Fournette skipping bowls to Dak Prescott’s rookie contract: Stanford RB Christian McCaffrey and LSU RB Leonard Fournette’s decisions to skip the lower-tier bowls their teams are playing in to avoid injury and prepare for the NFL draft seems like a smart business decision, but there are a whole lot of talking heads (who are well-paid for their takes on unpaid college athletes) who have a problem with it. One of those is ESPN’s Danny Kanell. As part of a larger Twitter rant about McCaffrey’s move Monday, Kanell somehow thought a hypothetical comparison to Cowboys’ quarterback Dak Prescott (who, unlike McCaffrey and Fournette, is paid to play) was justified:

So I guess Dak Prescott should stop playing this season. He's severely underpaid as a franchise qb. Why risk injury? Got to get his right?!?

Grayson Allen tripped a kid, 3rd time, it is dumb,suspended indefinitely. Michael Floyd got his second DUI,.21- playing for Patriots

This is dumb on multiple levels. For one thing, Allen’s punishment is probably going to wind up actually being lighter than what Floyd’s already received. Who knows how long “indefinitely” will be, but Allen is still on the team, and Gottlieb ignores that Floyd was actually cut by Arizona as a result of that DUI. Beyond that, this is so apples-and-oranges that the comparison is ridiculous. Should Floyd be suspended by the Patriots or the NFL? Maybe; you can absolutely make that argument. But his off-field behavior has nothing to do with Allen’s on-court behavior, and punishment (or the lack thereof) at the professional level in a completely different league and a completely different sport shouldn’t impact if a college athlete is suspended or not. If you don’t think Allen’s behavior warrants a suspension, make that argument, but don’t bring in ridiculous comparisons to vastly different situations in other sports.

3. Cris Carter thinks McCaffrey and Fournette “signed up for this whole season”:

You know your take is bad when overall Hot Take Standings leader Jason Whitlock’s the one making the reasonable argument against you. Carter’s contribution to this Speak For Yourself discussion (starting around 1:28) is just all over the place:

So, Carter is simultaneously arguing that McCaffrey and Fournette “signed up for this whole season” (not necessarily, and it should be noted that many of their teammates have been supportive of their decision), that they should have “played better” to get into a higher-profile bowl (maybe, but there’s more to the standings than any one player), that his experience with a draft prep service means no draft preparation can take place before a bowl and that lower-tier bowls are key in draft evaluation. The latter two arguments are flatly contradicted by Michael Lombardi, a long-time NFL exec who actually knows what he’s talking about here; this might be a good indication for prospects not to trust a service Carter’s affiliated with if they’re not going to do anything until after a bowl. Whitlock also notes that Carter effectively left his teammates early by signing with an agent before his senior year and being ruled ineligible, so it’s pretty funny of him to suddenly be all “You owe it to your teammates!”

2. Kirk Herbstreit praises Brandon Harris for not transferring, throws shade at those who transfer:

Hearing that @bharrisqb1 will return next yr to LSU. If true-how refreshing to see a QB hit adversity & stick it out instead of transferring

“How refreshing,” eh? Because athletes should just remain bound in servitude to the school they initially signed with even when that school makes it clear they’re not in the plans? They should continue to show loyalty to a school that doesn’t return it, and to do so when that isn’t expected of paid employees of the school? (It’s interesting that for all the people who have problems with athletes transferring or skipping a bowl game, few of them lodge the same complaints against coaches who change jobs and skip their old school’s bowl game.) And they should sacrifice any future earning potential they might have in the name of loyalty? Right. To transfer or not to transfer is an individual decision, and it makes great sense for some athletes; sticking around makes sense for others, especially given the harshness of the NCAA’s transfer rules. It’s funny to see the likes of Herbstreit, well-paid for their opinions, opine categorically that those who transfer are “fleeing adversity” rather than just attempting to maximize their often-slim chances of actually getting compensated for playing a sport.

1. JT The Brick says “How dare” McCaffrey and Fournette sit out:

"How dare any football player who puts on pads, cleats, and a helmet sit out a bowl game"
— @JTTheBrick. https://t.co/OTH7XACEZ7 pic.twitter.com/7u4R7evhaK

This is the hottest take yet. Here’s the full clip:

This “bothers you to the core,” JT? Maybe you need a better core. “I don’t think you should ever sit out a bowl game on any circumstance other than injury.” Well, as with most of the hot takers here, it’s nice that you’re paid so well to tell athletes they should continue to work for free and jeopardize their future earnings in the process.

Notable absences: Jason Whitlock, Clay Travis, Stephen A. Smith, Phil Mushnick, Skip Bayless. Amazingly, the top five in our standings didn’t have any particularly dumb takes on this front (that we saw) this week. Welcome to the column, Kanell, Carter and Herbstreit; welcome back, Gottlieb and JT.

Happy Hot Take Holidays to all; there’s plenty of sports media heat out there to power a fireplace. Tune in next week for more This Week In Hot Takes. As always, you can send submissions to me here.