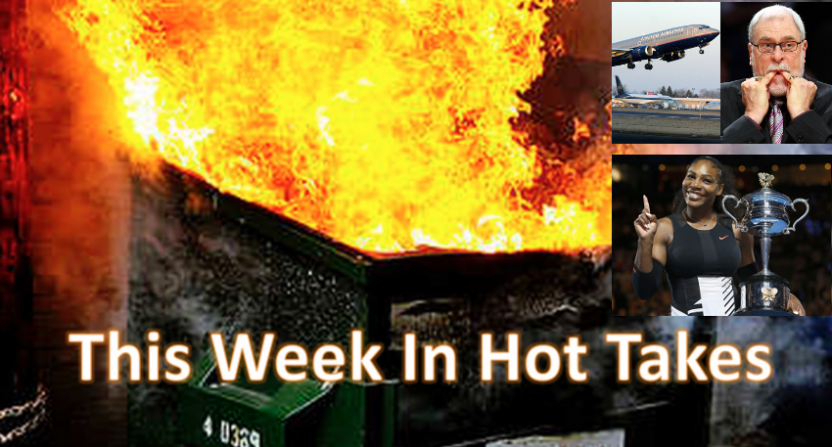 Welcome to another edition of This Week In Hot Takes. Here’s a look at the hottest sports media takes from April 14-20.

5. Stephen A. Smith is “damn disgusted this damn Phil Jackson is still in New York”: Lots of people have criticized New York Knicks’ president Phil Jackson, particularly over his trashing of Carmelo Anthony in the press, so the opinion here isn’t necessary wrong. But the level of venom Stephen A. unleashes in this rant is remarkable:

“Phil Jackson is wrong, and it’s a damn shame that Kristaps Porzingis seems to be more willing to call Phil Jackson out than Carmelo Anthony.

…He is an absolute disgrace, he needs to get the hell out of New York City big-time, quick fast and in a hurry.

…I’m so damn disgusted that this damn Phil Jackson is still in New York City.

…I don’t know what I would do to Phil Jackson if he showed his face. This man is a disgrace because he’s sabotaging the Knicks. He’s throwing everything away.

…This is a disgrace, and somebody needs to do something about Phil Jackson right now. Get him the hell out of New York.”

That’s some fire, all right.

4. Doug Gottlieb calls agents paying athletes “indentured servitude”: Gottlieb previously made this column a couple of times while at CBS, and his new Fox job (even if it’s not the Oklahoma State one he wanted) may lead to him making it many more. He’s certainly already fitting into #embracedebate, as you can see from this rant he went on against Jason Whitlock’s support for paying athletes on Speak For Yourself Tuesday (starting at 0:50):

BEST SEGMENT YOU MISSED:
Whitlock and Gottlieb get into a heated debate about the merits of NCAA amateurism. pic.twitter.com/1xpwtLu6xz

“You’re proposing that there should be no laws. …It becomes indentured servitude, that’s what ends up happening. When an agent pays you money, when an agent gives you a loan on a car, you owe that guy money.” Whitlock’s face and “Do you know what indentured servitude is? Playing football or basketball when the coach makes $9 million.” reaction is priceless. Gottlieb then goes on to say that not paying players is great for the players: “It actually helps kids get into schools that they would never have an opportunity to get into, ever.”

3. Charles Barkley calls critics “nitwit, scumbags, idiots, punks”: On Sunday, Turner NBA analyst Barkley said seeing Celtics’ star Isaiah Thomas crying (one day after the death of his sister in a car accident) “makes me uncomfortable because that tells me he’s not in shape to play.” (Thomas finished with 33 points, six assists and six rebounds, by the way.) Barkley took understandable criticism for that, and chose to double down by unloading on the critics Tuesday:

Charles Barkley fires back at people saying he "crossed the line" by saying he felt uncomfortable about Isaiah Thomas playing on Sunday pic.twitter.com/p2hNPDyu7y

This one’s especially great because it’s Barkley applying revisionist history to himself; his Sunday comments were clearly about Thomas not being fit to play, which Thomas then disproved, so he instead made them about himself being uncomfortable. It doesn’t work that way, Chuck, and the nitwit scumbag idiot punks were right in this case.

2. Dan Wetzel says United passenger should “go protest something important”: Big-time sports media personalities talking about how hard travel is for them isn’t new (see Smith on this back in January), but Yahoo columnist Wetzel, on his personal blog, managed to combine rants about other people’s behaviors on planes he finds objectionable (because all travel and behavior should be conducted in a way that’s optimal for him, of course) with complaints about people going after United Airlines for how they violently dragged a passenger off a plane, and complaints against that passenger for not just giving in. Here are the highlights:

Not to defend United for dragging that guy off the plane, but generally the biggest problem when it comes to flying is not the airlines but my fellow passengers.

I don’t know all the details and don’t care for all the details but clearly United messed up. If you need seats on a full flight you have to keep raising your bump compensation until someone takes it. That’s the way to deal with this.

But in defense of airlines, we can walk back the rest.

Just briefly: overbooking isn’t a bad thing. It’s a good thing. Good for the airlines who can maximize profits by accounting for the number of people who miss flights, fly stand by earlier or later or cancel at the last moment. And good for passengers because that allows flight prices to remain lower than they otherwise would and gets as many people on a plane (and thus across a day) as possible. Also, you can score some sweet credits if you volunteer.

…The United thing was extreme. Poor work by the airline, but when three cops come and tell you to move out of your seat, you should really move out of your seat. It’s not going to end well and an airline seat is hardly the hill you want to get roughed up on. Go protest something important.

Yes, giving into horrible treatment is always the answer, and we should all only protest things Wetzel finds important. Good for him for standing up for unfairly-maligned airlines like United! Oh, and his other complaints in there? People who drink frappuccinos on planes (how dare they make noise that Wetzel could ignore by putting on headphones?), people who don’t just go to sleep on planes, people with big bags, people who aren’t as exquisitely familiar with the TSA screening process as he is (because he’s a big deal who travels a lot, you know), people who eat burrito bowls, and people who want things from the drink cart (which should be banned on flights under two hours because it offends him). If Wetzel ever gets tired of sports, maybe he can write a whole book of travel hot takes.

1. Telegraph columnist Simon Briggs asks “Will Serena Williams want to fight her way back to the top when she becomes a mother?”: This column got lit up on social media Thursday, and rightfully so. Here are some of the highlights, er, lowlights.

Since her debut in 1995, Serena Williams has assembled the greatest career in the history of women’s tennis. But is that career now over? It has to be a possibility, after Williams seemed to reveal on Wednesday that she is pregnant.

…But will the younger Williams want to fight her way back to the top of the game in 2018, having become a mother some time around the US Open in early September? The real question relates to motivation: how much will she want her career back? Even Williams herself may not know the answer to that one yet.

However the story develops, the news will only add to the pressure on the women’s tour, which has had to put up with so many unscheduled absences over the past year.

Maria Sharapova is due back from her doping ban on Wednesday in Stuttgart, but Williams is the second leading player to fall pregnant after Victoria Azarenka, whose son Leo was born shortly before Christmas. The two-time Wimbledon champion Petra Kvitova has also been recuperating from the knife attack she suffered in December.

“To fall pregnant” may be the worst possible way to describe that, and putting Williams’ and Azarenka’s absences thanks to pregnancy in the same sentence as a knife attack also seems like a bad idea. Countless female athletes have returned to sports and shone at the highest level after pregnancy, and as per the “distraction” argument many try to make, it’s notable that most people don’t ask male athletes how they can focus after becoming parents. Could there have been an acceptable piece musing about how much longer the 35-year-old Williams will want to play? Perhaps. But Williams has been the most dominant player out there, and she didn’t lose a single set while cruising to an Australian Open title in January. It seems very premature to speculate that she won’t want to or be able to get back to the top.

Honorable mention: This Cathal Kelly column in the Globe and Mail on how the Patriots should have cancelled their White House visit instantly after the death of Aaron Hernandez (who was last on their roster in 2013), comparing it to having a work function on a Monday after “someone from accounting kills themself on Friday.”