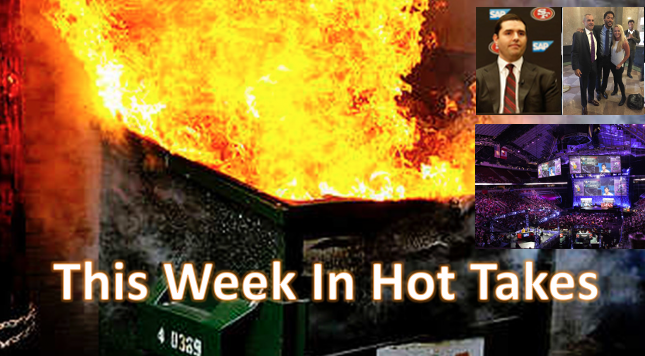 In a world that has embraced debate, there are many hot sports takes out there in any given week, and they’ve been termed “one of America’s greatest exports.” But which takes can stand out in that crowded environment? And which personalities consistently bring the most heat? That’s what we’re tracking in This Week In Hot Takes, counting down from the fifth-hottest to the hottest. We’ll be keeping an ongoing leaderboard where we’ll eventually crown a king or queen of Hot Takes. Here’s the latest edition covering Oct. 14 to 20, from your friendly neighborhood keyboard bully…

5. Seth Davis tells athletes “put down the joystick, pick up a book”: It must be time for “Paternalistic Comments About College Athletes,” and CBS/SI’s Seth Davis (who’s been one of the key figures in the “don’t pay athletes!” movement) has long been a leader on that front, saying in March that they should feel “blessed” to play for free. But Davis doesn’t stop at telling these athletes they shouldn’t be paid for their labor and for bringing millions in revenue to the NCAA. No, he’s now telling athletes how to use the limited amount of free time they do have:

When I hear athletes tout their competitiveness at playing video games, I am not impressed. Put down the joystick, pick up a book.

Colby Lanham had the perfect response:

When I hear non-athletes talk about what athletes should do, I think they should eat a Snickers. They get judgmental when they're hungry. https://t.co/FRDJjfz4sp

4. Lowell Cohn spends whole column calling Jed York “son,” is confused by “inside twist”: Santa Rosa Press-Democrat columnist Cohn is becoming a fixture around these parts for his ridiculous rants about the 49ers. Cohn delivered one of the most embarrassing press conference performances you’ll ever see with his interruptions of Chip Kelly in September (and Kelly schooled him nicely), and now he’s made it into the hot takes roundup thanks to this absurdity of a column. Criticizing 49ers owner Jed York is certainly valid (especially over his dealing with Jim Harbaugh) and not uncommon, but Cohn manages to actually make York look good and sympathetic by comparison, spending a whole column repeatedly calling him “son” (York is 36, which I guess could make him the 70-year-old Cohn’s son, but that’s still not a good look) and talking to him “as an older man to a younger man” (age doesn’t always bring wisdom, especially in sports media, and York would be wise to not listen here). The best part is how Cohn decides that Chip Kelly is a bad coach because he gave a football answer Cohn didn’t understand, though:

Kelly talks technical football to extricate himself from answering hard, fair questions. He knows the media won’t understand a word he’s saying, puts up a verbal shield. On Monday, he went on and on about something the Bills defense did called the “inside twist.” Is it a dance? Whatever the twist is, the Niners didn’t handle it in that 45-16 embarrassment. Come on, baby, let’s do the twist.

Wouldn’t it behoove a football reporter/columnist to learn what a coach is talking about rather than citing that as evidence he’s a bad coach? It’s not that hard, especially when it comes to inside twists. York may not be a great owner, and Kelly may be struggling with the 49ers, but someone who would rather lob “son” and other criticisms than be bothered to even learn the football terminology the coach is telling you in response doesn’t have much credibility to criticize. It suggests he certainly wouldn’t do a better job than either of the men he’s blasting here.

3. Stephen A. Smith calls the Redskins “losers.” Smith developed a bizarre feud with the Washington Redskins this week, first taking exception to Washington defensive linemen Chris Baker and Ricky Jean Francois boasting “We run the damn East” after a win over the Philadelphia Eagles Sunday. That led to this Smith rant on Tuesday’s edition of First Take:

Smith apparently was annoyed about the Redskins boasting about winning the division last year (which they did) and being happy about beating the Eagles. Here’s a transcription of his rant, from Dan Steinberg at the D.C. Sports Bog:

This led to Baker, Francois and Pierre Garcon taking shots at Smith on Twitter, causing him to then really lose it:

@stephenasmith @FirstTake you better put some respect on our name. Always talking slick out yo mouth professional

Put some respek on it. Ain't saying it no mo https://t.co/PV2eVYkLHe

Oh Hellll No you didn't @cbaker92redskin! I know you ain't coming out your mouth. I'll deal w/ yo ass tomorrow on @FirstTake. I'm coming!

That’s about as threatening towards a player we’ve seen Smith be since he told Kevin Durant “you do not want to make an enemy out of me,” but his actual criticisms of the Redskins on Wednesday’s show included him pointing out that he doesn’t want to actually fight Baker, who is 333 pounds and is also married to ESPN talent producer Jamila Phillips. It also included Smith admitting to be a professional smack-talker, and ranting that Baker is “playing chess instead of football” because the Redskins lost to the Cowboys earlier this year and sit in second place in the division. Oh, and co-host Max Kellerman got in on the hot takes, saying “The Washington franchise, whose name I won’t even use, is the worst franchise in the NFC East.” This whole thing then led to head coach Jay Gruden being asked about it and blasting Smith:

You have to feel for Gruden. It’s quite the thing to be unexpectedly caught in First Take’s hot takes vortex. The “losers” comment alone might only earn two flames, but the week-long nature of this rant and “I’ll deal with yo ass” elevates it to three. The whole thing’s reminiscent of Smith’s former colleague Skip Bayless’ ongoing back-and-forth with Dez Bryant; did Smith see that and decide “Hey, feuding with a NFC East player’s working for him, I’ll do that too!”

2. Jason Whitlock thinks Patriots’ culture is hard for black players to fit into:

.@WhitlockJason asks @mlombardifoxtv if the New England Patriots' culture is easier for white players to fit into than black players. pic.twitter.com/hAkMdyemSG

1. Doug Gottlieb calls Derrick Rose’s accuser’s lawsuit a “money grab”: It was quite the week for CBS college basketball personalities between Davis and Gottlieb. Here’s the take Gottlieb dropped after Rose and his friends were found not liable (and Rose promptly proceeded to pose for pictures with jurors) in a civil lawsuit by a woman who claimed they raped her:

You've already heard. Rose and friends all found not liable on all claims.

If you read about text messages etc, this was a a money grab. https://t.co/v45j8SpMBk

Gottlieb, like many around this trial, completely misrepresents the text messages in question; just because the woman said she wanted to have sex with Rose at some points doesn’t mean she provided consent in all circumstances and situations, and just because she asked Rose for money at some points doesn’t mean she wasn’t raped. Gottlieb took strong criticism for this, but kept doubling down (including with a since-deleted tweet saying this claim “makes it harder for real victims”):

@k_trahan except for the amount of money she went after,her texts about buying things cause of his money?attorney not disclosing other texts

.@k_trahan her texts specifically talked about getting money from Rose.

That’s quite the fiery opinion.

Notable absences this week: Clay Travis, Skip Bayless, Colin Cowherd, The New York Post. Whitlock still leads the overall race, and is pulling away, but Smith moved up into third with his take here, and passed Bayless in the process.