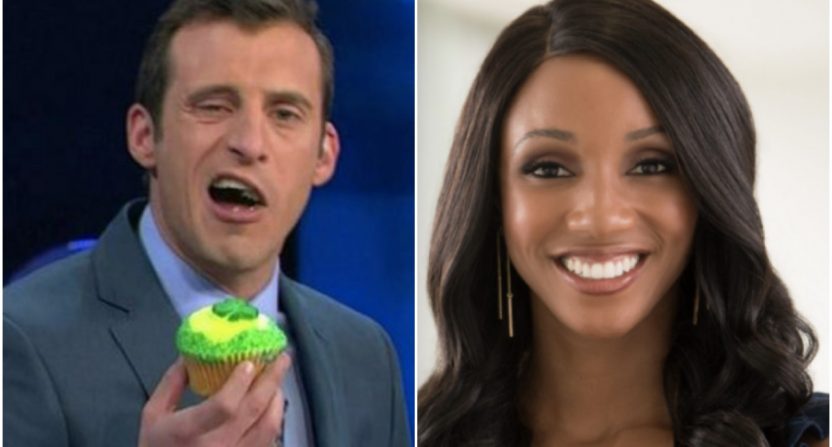 When NBA awards voting was announced, one voter had left Anthony Davis entirely off of their All-NBA ballot. Today, with ballots being released publicly, we learned it was ESPN’s Maria Taylor. She immediately took to Twitter to note it was an accidental mistake on her part:

Wow it’s been a long week. But if everyone would now like to take away my voter privileges because of a CLEAR mistake. Please feel free.

Considering Davis made the first team anyway, it’s hard to look at it as anything that consequential. And considering the week Taylor has had, dealing with the fallout from a gross, sexist comment about her appearance that led to Chicago radio host Dan McNeil getting fired, you’d think people would have been inclined to let this one go. Sure, Laker fans on Twitter were going to get their stupidity in, but when it came to people actually in media, it hardly seemed worth mentioning.

Why does Maria Taylor have a vote? Real question. She is a studio host/sideline reporter in her first year covering the NBA. She works a ton, not just on the league. No reason for her to have a vote https://t.co/Sy2M2jW9Pb

Taylor, understandably given her week, wasn’t having it:

Because I PLAYED basketball…I COVER the league. And I DESERVE everything I’ve worked hard for. https://t.co/JwLjk6dsb9

Players like Donovan Mitchell and other members of the media agreed:

Because she knows what she talking about … and worked hard to get where she at… and hooped…. y’all really gotta stop trying @MariaTaylor its corny! https://t.co/p9g6pSIftB

I’ve been a voter. A couple times I voted the wrong person or put them in the wrong spot and I triple checked. An avalanche of drop down menus. Have you ever clicked the wrong date or gender or race? Her explanation of forgetting AD is plausible. Calling her out this way is ? https://t.co/GyUoWDuOeS

this was from the last moron, but evergreen advice here: @MariaTaylor ain’t the one to try. not now. not ever. pic.twitter.com/lieLzLPFuZ

Gottlieb, meanwhile, decided to double down while also insisting he wasn’t being sexist and that it was instead about ethics in NBA awards voting, or something.

.@MariaTaylor these feelings are reserved to you or women. Hosts are there for opinions. Ernie, Kurt Menafee, James Brown are all great at what they do.. but they aren’t analysts paid for their opinions. https://t.co/oG4rrdpnrs

It ain’t sexist. Don’t care that she is a wonderfully talented woman. In covering the NBA – to be a host, one who is working all over the place, she is being asked to do something she isn’t the most qualified to do. Period https://t.co/eZXn1LVwv3

Doris played, coached basketball. She is a maven for the sport. https://t.co/JzH40kdsve

It should be noted that Taylor played college basketball at Georgia, which apparently isn’t enough for Doug. It’s almost like he’s making a disingenuous point for the sake of getting attention! Let’s see if there are any other clues that’s what’s happening…ah, yes:

.@rachelbonnetta you are hilarious, I like the show, enjoy your skits. But this is like you giving gambling advice(@ClayTravis too). That would be ignorant https://t.co/eZXn1LVwv3

Gottlieb also attempted to hit Taylor over the Anthony Davis thing, which again, was clearly not a conscious thing. (And the rest of her ballot was totally fine, too.)

By the way. If you didn’t vote for Anthony Davis, the statistically best player (and a plus def) on the team with the best record in the West 1/2/3rd team all #NBA you have a pretty in-defensible position… but feel free to take shots at stance which most in my field agree w/.

Here’s perhaps the crux of Gottlieb’s attempted point, which he continued to attempt to make:

Studio hosts don’t give opinions. Analysts do. Panel of voters should be all former players, coaches, execs and current analysts. Doris yes. Maria No. this isn’t hard https://t.co/6hKt7p4mzm

The problem with that, of course, is that it’s incredibly difficult for a woman to get a job as an analyst covering the NBA. Gottlieb’s plan would essentially take awards votes away from all but Doris Burke and Candace Parker, and there weren’t that many women voting to begin with. A less diverse array of voices is never a good thing, but that’s what he apparently wants.

If you want to have a debate about the media voting on NBA awards, especially considering how All-NBA status and other awards have potentially huge contract implications for players and teams, that’s certainly a discussion worth having. But that’s not the discussion Gottlieb wants to have. Unfortunately for him, the conversation he ended up getting wasn’t the one he wanted either. There was never a good time for him to try to make this point this way, but this week of all weeks?