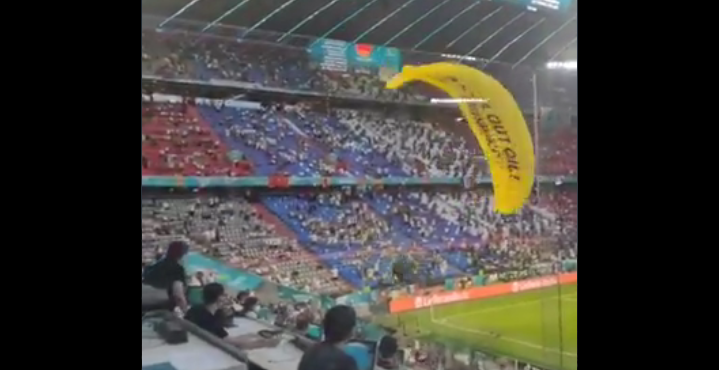 We’ve seen lots of stories about the various types of cable-suspended cameras over the years, from punts and passes hitting wires to great usages for kick returns and foggy games to questionable main-angle usages to attempts to bring those cameras into other sports. But what happened ahead of the Euro 2020 match between France and Germany in Munich Tuesday stood out. A Greenpeace activist paraglided into the stadium with a parachute covered in slogans, but got caught on the Spidercam. Here’s footage of that from Max Merrill of Deutsche Welle:

Can't believe I just caught this on video. Parachuted into the stadium, got caught in the spider cam and nearly crashed into the crowd. Hope he's ok! #GERFRA #EURO2020 pic.twitter.com/PJ49WYdFM9

And here’s another angle from Florian Plettenberg of German TV channel Sport1:

? To explain: The paraglider (with motor) flew into the arena without permission. Then he got caught in the cable of the hovering camera. The activist (Greenpeace) briefly lost control. Flew just above the heads of the fans on the lower tier and the players. Then crash-landed. https://t.co/0xhGeZqGLc

There have been a few sports events disrupted by paragliding or parachuting protestors over the year, but it’s unusual to see one get caught on a camera wire. And it’s remarkable to see a camera system playing the kind of pitch-invader defense we usually see from security. Hopefully this didn’t lead to serious injury for anyone.