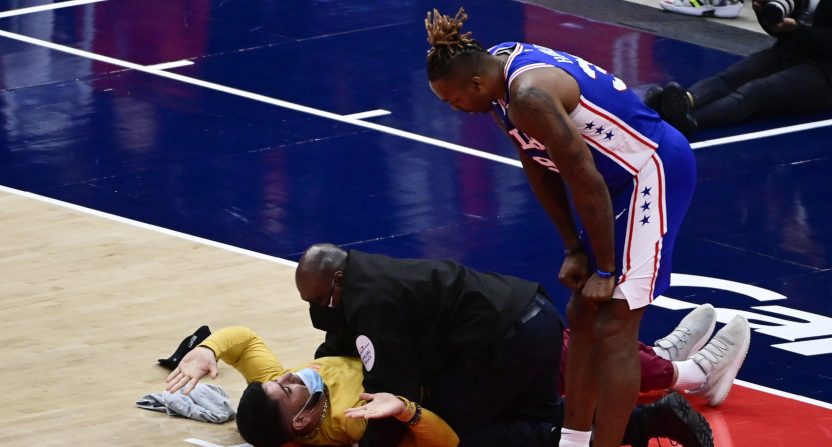 There have been plenty of cases of fans running onto a sports playing surface over the years, and Kevin Harlan has wound up calling many of them, including one at Super Bowl LV (on the Westwood One radio broadcast) this February. Well, a fan invasion of a playing surface happened again Monday night in Game 4 of the Philadelphia 76ers-Washington Wizards NBA playoff series, with Harlan again on the call (this time for TNT, alongside Reggie Miller). Here’s a clip of that:

A fan attempted to run on the court in the middle of Game 4 between the Sixers-Wizards pic.twitter.com/51pdBKOxwh

Harlan says “Oh my goodness, what is going on? We’ve got a fan on the floor. And a diving tackle by the security! With 3:40 to go here in the third.” Miller goes “The Redskins might want to look into hiring that man right there! What a tackle by the security!” After that, there’s some further discussion of how far the security guard had to run to come from his place behind the net. That’s illustrated in this fan video showing the whole sequence, which has the court invader come in from the side, run to the hoop, jump to touch the backboard, and then get tackled:

The call on Harlan’s end here is a little more somber than some of his past narrations of fans on the field, and there’s good reason for that in the context of recent interactions between NBA fans and players. Harlan and Miller go on to discuss that a bit, with Miller saying “We’ve seen some ugly incidents the past few playoff games.” And while he doesn’t go into specifics there, some recent ones include a fan in Boston throwing a water bottle at Kyrie Irving Sunday and three teams banning fans last week. Those three teams were the Sixers (for a fan pouring popcorn on Russell Westbrook), the New York Knicks (for a fan spitting at Trae Young) and the Utah Jazz (for three fans’ racist remarks at Ja Morant’s family). While this particular fan didn’t appear to make any contact with players, having a fan run on the court is dangerous at the best of times, and it’s even more worrying in the current high-tension environment.

And really, that speaks to some of what Harlan’s said in the past about not trying to call fans on the field as a regular thing. He’s made some great calls of those incidents in the past, but paying too much attention to those kinds of field invasions can give people the idea that they’re acceptable, and they’re certainly not. And this one seemed particularly troubling given that the NBA’s seen so many fan incidents recently, including one in this very series. It was an impressive response by the security guard, and Miller and Harlan’s discussion of that was fine, with Miller even making a NFL joke (although it should be noted they’re The Washington Football Team these days). But it’s also good that they touched on the ugly incidents we’ve recently seen, and that this wasn’t just a fun announcing moment. For those, it’s much better when it’s an animal on the field.