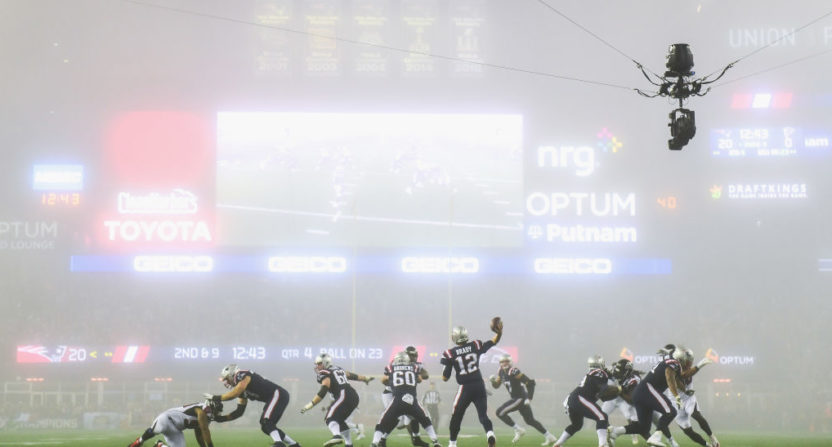 The intense fog wound up being the most interesting part of the New England Patriots’ 23-7 win over the Atlanta Falcons Sunday, and it provided a very different broadcast than usual. That was especially true once NBC started extensively using their Skycam angles in the second half thanks to the difficulty of seeing anything on more conventional angles. The overhead Skycam shots, generally used for replays but pressed into service as a primary live angle thanks to the fog, sparked plenty of comparisons to Madden and earned a lot of praise from viewers.

And now, a key NBC producer has spoken out about how important it was to have the Skycam Sunday and how its use might be expanded down the road thanks to the positive reception it got.

Sunday Night Football executive producer Fred Gaudelli spoke to Nick Greene for a Slate piece published Tuesday about the Skycam camera angles (they had two Skycams, the traditional one 12 feet above the field and an experimental one 57 feet above the field), how crucial they proved Sunday, and how challenging it was to use them this way:

The day after Skycam’s command performance, I reached Sunday Night Football executive producer Fred Gaudelli over the phone. “It was a lifesaver,” he said. “There’s no two ways about it.”

…Skycam is usually reserved for instant replays, so the Sunday Night Football team was in unfamiliar territory using it for extensive live shots. “The degree of difficulty is significant,” Gaudelli said. The lower Skycam, which was run by camera operator Ed Martino and pilot Cody Taylor, had to keep up with the action for most of the second half. When the quarterback throws a pass, the pilot needs to navigate the camera downfield to track the flight of the ball at the correct speed while the operator adjusts to keep the play in focus.

“The person who runs it is up in the press box, and he’s basically operating the pan, tilt, zoom, and focus with two joysticks,” Gaudelli said. “Sitting next to him is a pilot flying the camera, and they have to be in complete synchronization. They deserve a ton of credit.”

...Operating the higher camera were Darin Haggard and pilot Raubyn Pointer, who had to deal with the challenge of using an incipient device in foggy conditions. This Skycam wasn’t deployed to show as much live play-by-play action as its lower counterpart, but it did provide wider angles for dramatic establishing shots. “We had two really good-looking cameras last night,” Gaudelli said.

These clips illustrate how different the fog-filled field appeared through more conventional camera angles and the Skycam:

So, the Skycam definitely worked well for evading the fog. And the view was familiar to (and praised by) many Madden players:

It's like playing madden as Tom Brady with this camera angle.
And I love it ? pic.twitter.com/sCXjokTW5b

Gaudelli said he figures video games played a big role in the positive reception of the Skycam:

The executive producer was not entirely surprised that the views were a hit. “Halfway through that second half I thought, There are going to be people calling for this to be the main angle from now on,” Gaudelli said. He thinks Sunday’s broadcast got so much acclaim because the football-watching masses have grown familiar with the camera angle, which has been a staple in football video games for decades. “There are generations of football fans who really kind of learned about football, or experienced a lot about football, through Madden.”

Gaudelli’s definitely right about the people who want more of this, as many prominent figures called for expanded Skycam usage. And the praise these angles got may lead to further Skycam live shots, too; Gaudelli told Greene he’s giving “serious consideration” to using it more during other games.

But there are challenges; in addition to the difficulty for the pilot and camera operators in tracking live plays (Gaudelli mentions that they have to read and predict if a play will be a run or a pass), the amount of camera motion can bother some viewers, wind can make it hard to keep the camera steady, and rain or moisture can necessitate lowering and cleaning the Skycam, difficult if it’s being used as an every-down camera on a long drive.

Still, Skycam certainly saved the day for NBC Sunday, and it won plenty of plaudits along the way. And this game could potentially be a turning point in how these cameras are used, one that might lead to a lot more Skycam in future.