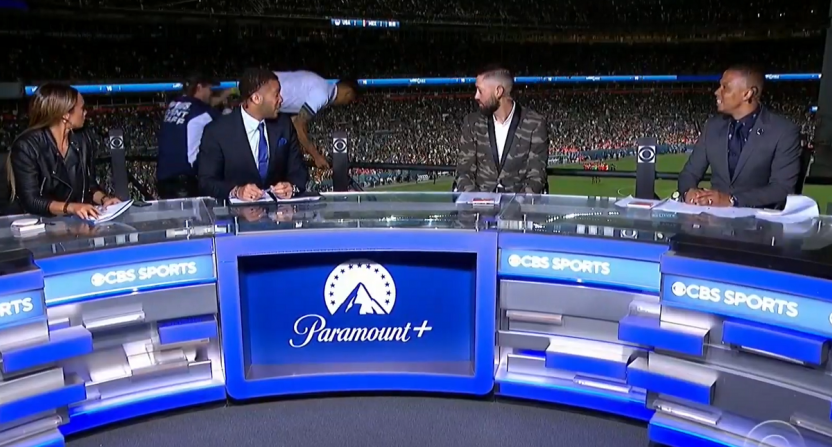 Tonight’s CONCACAF Nations League final between the United States and Mexico was an incredibly weird affair, but one of the stranger moments came off the field.

During the break between the end of regulation and extra time, Kate Abdo, Oguchi Onyeu, Clint Dempsey, and Charlie Davies were setting up the overtime period from the CBS Sports desk on site in Denver.

And then they were interrupted by some kind of intruder:

Weird/scary moment here as security chases someone away from the CBS Sports set: pic.twitter.com/FQDjlO1vAi

Dempsey immediately chuckling about it is certainly a reaction to having seen someone drop at least a story down to the level below.

Is this man alive ? pic.twitter.com/f5nPl4IwLT

It’s wild that he managed to get that close! In the end, the moment was just one of many strange and memorable ones from a match that only happened because…uh…CONCACAF was bored and decided they needed a new competition, basically.

The USMNT ended up winning thanks to a Christian Pulisic penalty in extra time, and more importantly an Ethan Horvath penalty save in overtime.

"With the save of his life!" pic.twitter.com/iCcUX9PROF

And the Univision call, which is incredible:

The Univision call is as good as you’re expecting (via @bubbaprog) pic.twitter.com/Z6uYHLmDUc

What a weird, memorable late Sunday night of soccer. In a lot of ways, it was the ridiculous carnival of sports entertainment that the Paul-Mayweather fight was supposed to be.