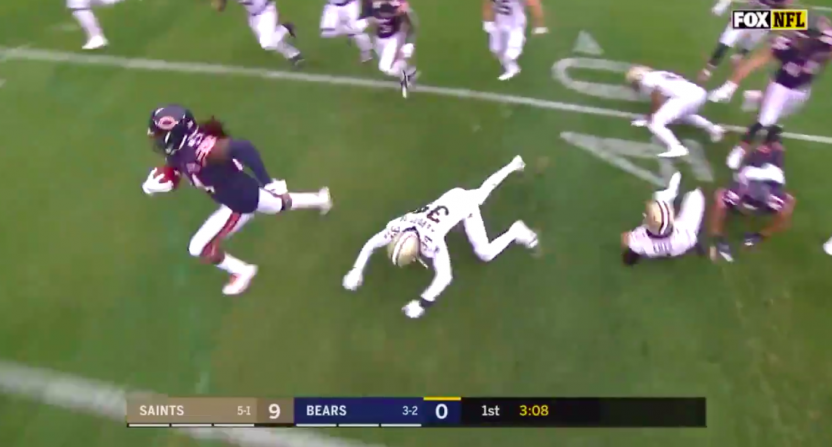 It’s been a long, strange trip for SkyCam and football. Ever since the XFL became the first football league to put them to wide use, it was clear that NFL broadcasters would eventually find a way to work the roving camera into their array of angles and offerings. That’s certainly been the case in recent years as networks have played around with using SkyCam as their primary angle, to mixed reviews.

There have been quite a few times when SkyCam has caused headaches during broadcasts as well, like the time it prevented viewers from knowing if a game-winning field goal was good or not. Or the time its wires literally disrupted a play. And it’s obtrusive nature had led some players to flip it off rather than present a pretty picture.

As our Brad Gagnon put it amidst the complaints about the technique, “the Skycam is novel, but it isn’t economical when it comes to offering viewers the game’s most pertinent information in real-time.” SkyCam is good for certain situations, but not for everything.

A certain situation presented itself on Sunday when the Chicago Bears were getting ready to receive a kickoff from the New Orleans Saints. Down 9-0 at home early, the Bears needed a spark and that spark came in the form of Cordarrelle Patterson, who took the ball out of the endzone and scampered 102 yards down the field for a touchdown. It’s a great play in and of itself, but the moment was made all the more special for viewers at home thanks to the amazing angles that only could have come via SkyCam.

Everything about the camerawork is pretty much perfect. The way the camera zooms in on Patterson as he receives the ball. The way it swivels and turns to keep up with him as he runs through the initial chunk of defenders as if it’s running right alongside him. And the way it pulls back to give Patterson’s run into the endzone the scope it deserves as the crowd goes wild and the game’s momentum shifts. Chef’s kiss to whoever was directing all of that.

Of course, you wouldn’t want the whole game to be from this angle (right, NBC?) but that’s the point. SkyCam is a tool in the NFL broadcaster’s toolbelt that’s perfect for situations just like this one. Just don’t get greedy, Fox.