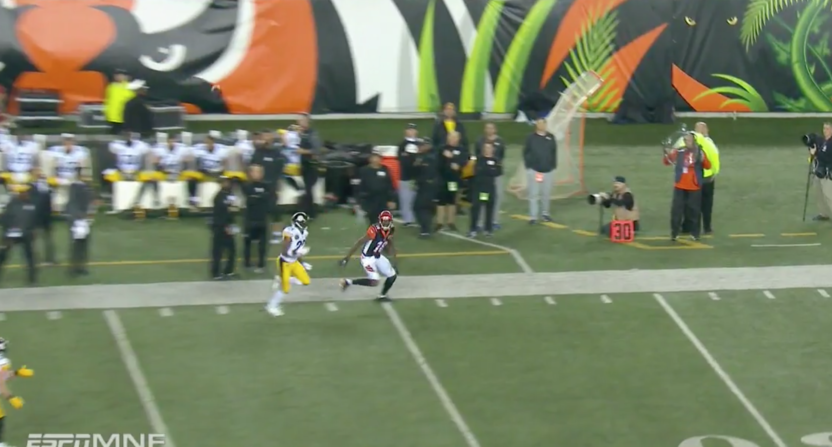 Late in the second quarter of the Bengals’ game against the Steelers on Monday night, Andy Dalton dropped back to pass and fired a deep ball down the left sideline toward receiver A.J. Green. The throw seemed on target before apparently changing direction and falling incomplete, and although we can’t be sure exactly what happened to make the ball change course, it seems as if it deflected off a television wire. Watch how it abruptly changes direction shortly before tumbling down in front of Green.

What else could that be but a TV wire, right?

We’re not alone in this theory. Numerous fans watching on TV noticed the ball’s bizarre path and speculated that it had hit a wire.

I'm telling you Dalton's pass just hit something in the air.

Watch how it died. https://t.co/q7MsvgPqRC

I’ve rewinded it a bunch. Something happened to that ball https://t.co/B8Gld6jCxh

That ball hit the sky cam? Or did it just explode in the air?

Did that last ball from Dalton hit a bird? The SkyCam? Did a sniper take it out? Thing just died in mid air

Did that throw from Dalton hit the skycam wire?

If Dalton’s pass did indeed hit the Skycam wire, it would not be the first time we’ve seen something like that happen. In 2015, a University of Utah punt collided with a wire, resulting in a replay of the down, and a year ago this week a Derek Carr pass appeared to connect with a wire, potentially costing the Raiders a touchdown. Such plays haven’t happened enough to be any sort crisis, but it does seem that ESPN and other networks might want to be more careful about where their wires wind up.

In the Bengals’ case, not only was Dalton’s pass incomplete, but Green was charged with a 15-yard face mask penalty, sending Cincinnati in the opposite direction. However, as Dalton found Green two plays later for a 47-yard completion and the Bengals wound up scoring a touchdown on the drive, making the whole did-the-pass-hit-the-wire question moot.