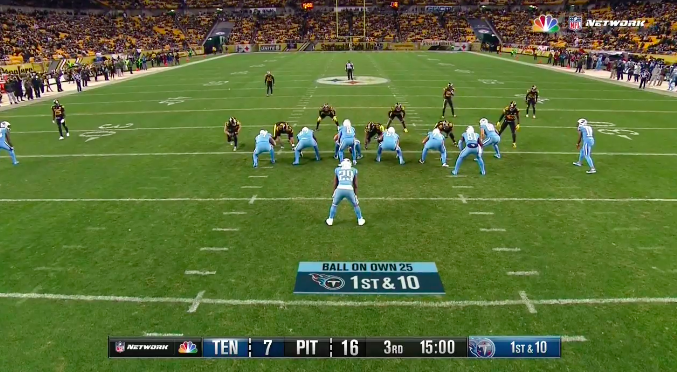 This prediction isn’t based on inside information and I’m right only as often as a broken clock, so there’s a chance I’ll eat these words in a matter of weeks if not days. But I’m going to say it anyway: You will never again see the Skycam view used as frequently in an NFL broadcast as it was during NBC’s “Thursday Night Football” of the Tennessee Titans-Pittsburgh Steelers game.

It was a worthwhile experiment and I don’t blame them for trying, considering how many people seemed to enjoy it when weather conditions forced NBC to use said view consistently during an October matchup between the Atlanta Falcons and New England Patriots. But if you searched Skycam on Twitter Thursday night, you’d see that the negative reaction greatly outweighed the positive feedback.

#TENvsPIT If NFL Network doesn't stop using that skycam I am going to have a stroke.

Don't get me wrong, I like SkyCam view sprinkled in, but there's a reason we all enjoy watching games on TV like we're sitting at 50-yd line. No one's sitting there clamoring for an end zone seat when you can have 50-yd line view

That last point is important. The Skycam is novel, but it isn’t economical when it comes to offering viewers the game’s most pertinent information in real time.

It’s cool, but it’s not efficient.

Sure, a lot can be gleaned from the Skycam view that can’t be seen with the customary sideline view which football games have been presented in since the beginning of time. But isn’t that the whole purpose of instant replay? Skycam was adopted and implemented in order to give us the unique perspective that a lot of folks are currently losing their shit over,. But that perspective has been available via replay for years.

Cons:
Where are the receivers? Flags?
1st down line?
Linebackers?
Perspective for relative distance

On too many occasions Thursday night, viewers lost valuable perspective. The Skycam view either isn’t wide enough to capture all 22 players on the field or is so wide that you lose detail. And more importantly, you often lose the ability to track a ballcarrier’s progress toward the first-down line, which is usually the primary objective on a given play.

That’s why it seems as though a lot of experts, analysts, former players and hardcore football fans without specific allegiances are giddy over Skycam.

One thing these camera angles illustrate is how tough the throws NFL QBs have to make are/how hard they're throwing the ball.

The sky camera angle takes some getting used to but it really shows you how everything develops. I love it…most of the time

Skycam makes it so much better to evaluate OL play. Very close to "high end zone" which is only angle OL really watch.

I don't understand how you can't like this view. You get to see how the defense unfolds and what the quarterback is seeing in real time. It's marvelous.

While casual fans and fans of either participating team are more preoccupied with the end result of each play, and are thus left feeling robbed.

skycam makes it easier to appreciate players' talent and harder to gauge the outcome of every play; guessing neutral observers like it more than fans

This camera angle they're using on Thursday Night Football is being received much like anything in pro wrestling is received by its fans: it's either the greatest thing ever or the absolute worst thing in history.

Since that second group is a hell of a lot larger than that first one, I think it’s safe to guess that the experiment wasn’t an overwhelming success. And if you’re trying to improve something that ain’t broke, the improvement had better receive unanimous applause. Networks won’t risk alienating millions of fans in order to enhance the live experience for a few, especially because — again — Skycam already existed!

Yes, this is friggin’ awesome in real time…

But wouldn’t it be just as awesome on replay?

Is all of this an indication that too many of us simply haven’t been paying close attention to instant replays? Are we missing all of these sick Skycam replays while we surf Twitter between downs?

The initial strong reaction to the novelty that was “Skycam live” and the praise Thursday night from fans of the intricacies of the game might be a clue that networks have been under-utilizing Skycam in general.

So I wouldn’t be surprised if we were to see a lot more Skycam moving forward. And I’m sure networks will try to use it live on occasional obvious running plays and/or early-down passing plays, mainly so that they can make us all experience a taste of what it feels like to make a terrible decision in an NFL game. That is unless the league’s quarterbacks negotiate to ban the view in the next collective bargaining agreement after it victimizes too many of them the way it did Marcus Mariota on Thursday night.

But broadcasters already have to turn back to the sideline view for third downs, red-zone plays and presumably crunch time (there was no crunch time Thursday night, but I can’t image they’d use Skycam to broadcast a two-minute drill with a game on the line), and going back and forth between the two angles would probably do more harm than good by preventing fans from becoming acclimated to either view.

The Skycam proved its worth on Thursday night, and we might see more of it as a result. But as a primary live view? Not bloody likely.