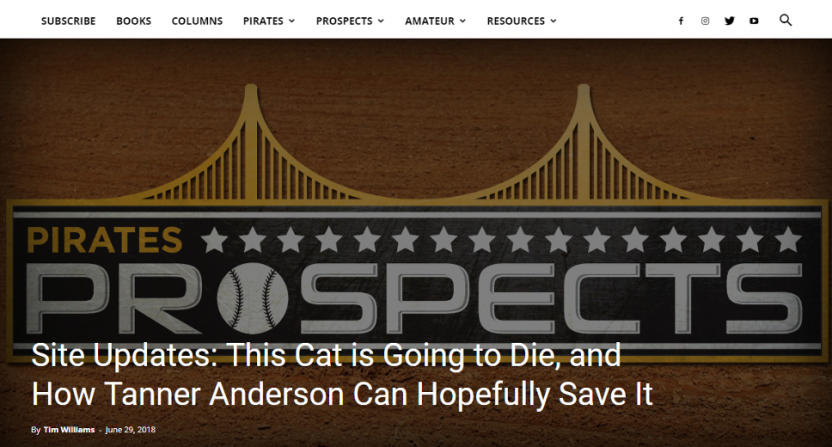 It’s no secret that it’s a tough era for sports media, with layoffs, buyouts and cutbacks everywhere from ESPN to newspapers to Deadspin. Subscription sites have some advantages over others, as they have revenue sources beyond advertising (and the online advertising market is particularly rough if you’re not Facebook or Google) and don’t have to deal with the costs of a print edition. But even they are facing plenty of challenges too, especially with growing competition for sports spending dollars from other subscription sites, streaming services and more. And then there are further challenges if you’re focused on a specific team and are carrying on the risk if interest in that team dwindles.

Tim Williams of Pirates Prospects outlined a lot of the issues his particular site is facing after 10 years in a remarkably-transparent post, and what really stood out there as something more widely applicable were his remarks on how sites need to actually be valuable to their consumers, not just ask them to be saved. He started the piece with an analogy about how animal shelters have found better adoption results by training cats to high-five rather than telling people “adopt this cat or it will die,” and extended that to his site.

Here’s the thing. Telling you that this cat will die if you don’t support it isn’t going to work. This post probably has more people wanting to cancel, or doubting a decision to purchase a subscription. The flip side is that saying nothing doesn’t work either.

The problem is that it’s hard to teach a website how to high-five like those adoption centers did with cats. How do I show you the value of the site, and show that it’s actually in your interest to subscribe and keep us from going away?

The Pirates called up Tanner Anderson the other day, and that news was met with a resounding “Who?” from Pirates fans and media alike. I sent out a few tweets noting that you wouldn’t be wondering who Anderson was if you subscribed to our site. He was our #48 prospect heading into the year, and I’ve written countless times about his Bronson Arroyo delivery.

…If we have details on a player that no one else even knows, then think about how much more information we have on every single player that comes through the system. This isn’t just about Tanner Anderson. It’s about everyone and everything in this system.

There’s a lot more in Williams’ post about the details of his site’s specific issues, from the role he ascribes in rising cancellations to Pirates’ ownership’s budget cutbacks and the team’s declining farm system to some plans he has to make money to pay his writers, such as an upcoming midseason top 50 prospects ebook. Some of the issues for Pirates Prospects aren’t applicable everywhere; they’re focused on one specific angle related to a specific team, a team that is seeing a downturn in interest and being in a competitive subscription sports marketplace, which includes Dejan Kovacevic’s Pittsburgh sports site, the recently-launched The Athletic Pittsburgh, established Scout/247 coverage for local teams and more. But his post is an interesting read for how it touches on larger issues, and perhaps most notably for the value-providing angle he’s emphasizing here.

For a sports site to survive in the crowded media landscape of 2018, and perhaps especially for a subscription sports site to survive, it’s likely going to have to provide things that are unique, and it’s going to have to provide value for money. The Athletic is trying to do that with their scale, bringing in tons of subscribers and then offering enough writers focused on subscribers’ various interests to hopefully keep them around.  There are questions about if that’s sustainable for every city and if that model is sustainable overall (especially with the pay raises they’ve reportedly offered many writers), but they’re certainly offering subscribers a lot. Long-established network insider sites like Scout/247 and Rivals have found some success as well.

But it’s not just them, and it’s not just at scale. There are also backer funded sites focusing on specific sports or sports angles, such as Unusual Efforts (diversity in soccer coverage), and writers like Kelly Dwyer, Jeff Gluck and Paul Kuharsky running independent subscription sites. It’s notable that they’re all trying to offer some unique value, from Unusual Efforts providing perspectives on soccer that aren’t often seen in the mainstream to Dwyer’s combination of basketball/music/comedy to Gluck’s subscriber meetups at racetracks to Kuharsky’s insider reporting on the Titans.

Is this going to work for Pirates Prospects, or for these other writers, or for even the larger networks over the long term? That remains to be seen. There are a ton of challenges out there, and the overall sports media landscape doesn’t look like it will be getting better any time soon. But Williams’ post is an interesting read about some of those challenges, and it’s especially notable for his plans to try and address the challenges by reinforcing what his site can do at its best and offering tangible products for potential subscribers. We’ll see how it works out.