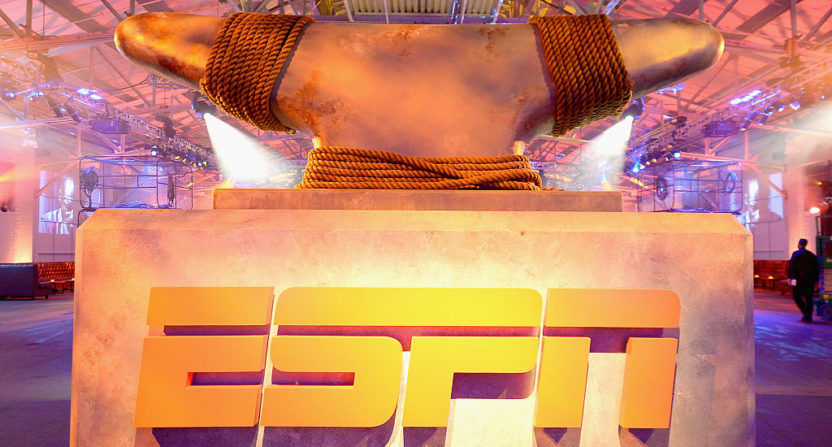 Six months after laying off about 100 front-facing employees in an unprecedented purge, ESPN could be headed for yet another ugly round of cuts, according to Sporting News’ Mike McCarthy.

McCarthy reports that the layoffs could come before the end of the year and will affect employees both in front of and behind the camera.

The next round of cutbacks could come down in late November or early December, with 40-60 positions potentially being impacted, according to sources. The layoffs could hit both on-air TV/radio talent and behind-the-scenes production staffers.

“This time it won’t matter if you’re ‘liked’ or not. It’s not going to be pretty,” one source warned.

Another source expects the flagship “SportsCenter” franchise to lose people in front of and behind the camera. “I see (ESPN) going down a path where they have less staff — and hire more production companies to provide programs and fill air time.”

At this point, it’s probably best to view this report with caution, considering we don’t know who leaked the news or why. Presumably only a handful of top executives in Bristol would be privy to these kinds of plans, and it’s hard to figure why they would warn the world so far in advance.

Still, the prospect of more layoffs at ESPN is somewhat terrifying for an industry reeling from layoffs at — deep breath — Bleacher Report, SI, Yahoo, Fox Sports, Vocativ, MTV, Mic, Vice and FanRag. For ESPN to let go of so many employees, then bring in a crew of new personalities, from Adrian Wojnarowski to Katie Nolan, and then let go of more employees would seem especially brutal.

ESPN, like most cable networks, has struggled with a diminished subscriber base that results largely from cord-cutting. Saddled with expensive rights deals and seven-figure commitments to TV personalities, the network is no longer thriving financially the way it has for most of its history. April’s round of layoffs showed that no one is safe at ESPN anymore, and the Sporting News’ report Thursday ensures that everyone in Bristol will be holding their breath for the foreseeable future.