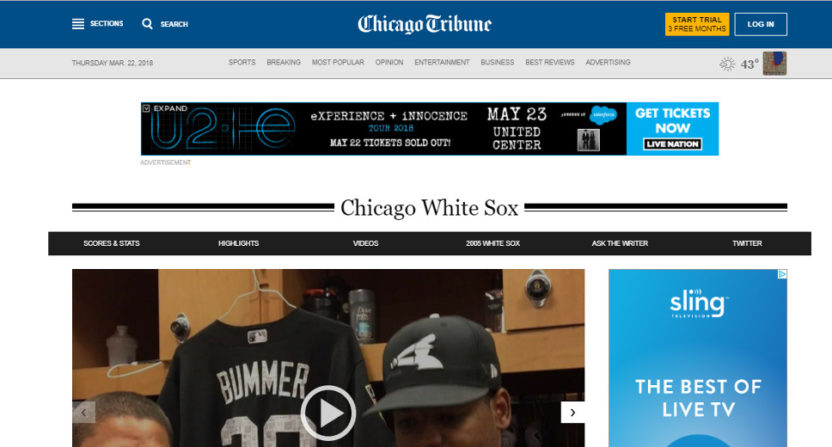 Recent layoffs at The Chicago Tribune included Blackhawks beat writer Chris Kuc and White Sox beat writer Paul Skrbina, and no replacements were immediately named. Chicago media columnist Robert Feder writes that the paper and its parent company Tronc (currently facing a different storm of controversy over CEO Michael Ferro stepping down this week shortly before a report accusing him of unwanted sexual advances was published) hasn’t been exactly forthcoming about how they plan to cover those teams down the road, either:

If you’re wondering how the Chicago Tribune will continue to cover the White Sox and the Blackhawks without dedicated beat writers, you’re not alone. As part of the latest wave of editorial job cuts at the newspaper, the layoffs of sportswriters Chris Kuc and Paul Skrbina leave the two teams without a full-time Tribune reporter assigned to travel with them. So what’s the plan?

I tried to ask Tribune managing editor Peter Kendall, associate managing editor for sports Joe Knowles, and sports editor Tim Bannon, but couldn’t get an answer. I did receive this statement from a tronc spokesperson: “The Chicago Tribune is fully committed to covering the Chicago White Sox and the Chicago Blackhawks. We value and understand the importance of covering sports both for fans and our readers.” Hope that clears everything up.

How is the paper actually covering those teams so far? Well, a quick glance at their White Sox and Blackhawks verticals is interesting. As of 2:30 p.m. Eastern Thursday, the White Sox page’s most recent stories were all from Tuesday; a story from Colleen Kane (listed as a Bears reporter) on the reassignment of right-hander Michael Kopech and outfielder Jacob May to minor-league camp, a column from general-assignment baseball writer Paul Sullivan wondering when Kopech (a hot prospect) will be recalled, and a story from Phil Thompson (listed just as “columnist, writer“) on a poor ranking for the White Sox’s stadium of Guaranteed Rate Field in a Forbes list.

None of those stories have a dateline, so they’re presumably not from the White Sox spring training base in Glendale, Arizona. And beyond that, the White Sox page’s recent material is only some general baseball stories from the AP, plus an older column from Sullivan (also without a dateline) about a “controversy-free spring” for the White Sox.

On the Blackhawks’ side, there actually was a story posted Thursday on Jonathan Toews missing a few games, and it was written by Skrbina, so presumably he isn’t completely gone yet. Skrbina also wrote Wednesday about the team being officially eliminated from the playoffs, and columnist Steve Rosenbloom posted a piece Wednesday wondering about potential offseason firings. Tuesday’s game was at home, though, as was Sunday’s game and as is Thursday’s game; the team’s last road game was in Buffalo Saturday, and they did send Skrbina to cover that. Their next road game is Saturday against the New York Islanders; we’ll see if the paper sends anyone to that.

It’s understandable that newspapers are looking to cut costs and reevaluate staffing given the challenges of the current media landscape (although many of them should probably be looking more at the compensation given to top execs like Ferro and not just at the salaries of individual reporters), but if the Tribune decides to proceed without regular beat writers for the White Sox and Blackhawks, that could be problematic for them. For one, White Sox fans are already regularly aggrieved by being forgotten about by the media, and this would be the latest example there. Hockey fans in general often have a chip on their shoulder about perceived second-tier coverage too, so Blackhawks’ fans could have a significant bone to pick with the paper’s moves here.

Beyond that, it’s worth noting that there’s plenty of competition out there. In particular, Chicago has been a long-established market for The Athletic, and that’s to say nothing of the Sun-Times and the various local TV and radio outlets that also cover teams. If the Tribune‘s coverage of the White Sox and Blackhawks is perceived as second-rate, that might well get some of their regular readers who are fans of those teams to jump to other publications.

Yes, covering sports is expensive, especially when it comes to travel. However,  good local sports coverage often is a key reason people still have newspaper subscriptions, in print or digital. If whatever plans the Tribune has to cover these teams in the wake of these layoffs don’t impress the readers, that might wind up hurting the paper.

We’ll see how it all plays out, but it’s certainly notable that a big paper in a major market seems to be pulling back a bit on coverage of a couple of significant teams. Maybe there will be some assignment shifts and they’ll return to regular beat coverage, and maybe this will all be forgotten about, but their statement to Feder definitely doesn’t build much confidence there. And if this does actually lead to the Tribune providing less coverage of the White Sox and Blackhawks, we’ll see how that bold strategy pays off for them.