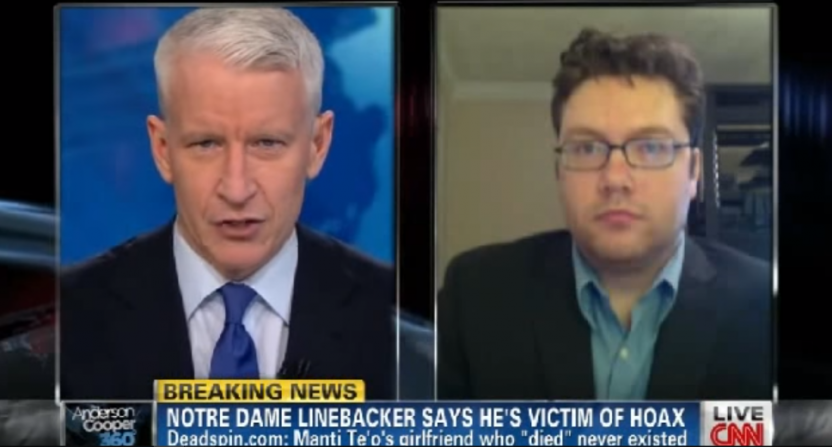 This week saw the news that 44 Gizmodo Media Group staffers had agreed to buyouts as part of new budget cuts from parent company Univision. On Friday, long-time Deadspin writer and editor (as well as video director for the larger group) Timothy Burke announced he’s leaving next week:

ANNOUNCEMENT: With great sadness I must tell you that my seven years at @Deadspin will come to an end one week from today. Thank you to my colleagues, who are the best in the business, and to everyone who sent tips, emails, or tweets. pic.twitter.com/PKkFW2AXlL

Burke produced tons of videos, GIFs and written pieces for Deadspin, and was heavily involved in some of the site’s biggest stories, including co-writing “Manti Te’o’s Dead Girlfriend, The Most Heartbreaking And Inspirational Story Of The College Football Season, Is A Hoax” (with Jack Dickey, who’s now at Sports Illustrated; that story went everywhere and led to things like Burke’s CNN appearance with Anderson Cooper, seen above), and putting together this year’s montage of news anchors at local Sinclair Broadcasting stations reading from a corporate script that went viral, showing up in a media watchdog ad, on John Oliver’s HBO show, and much more. He had also been one of the consistent presences at the site, which has undergone a lot of change over the past seven years.

The wider buyouts at Gizmodo Media Group are significant in scale, affecting 44 employees. Maxwell Tani of The Daily Beast notes that they’re across the sites, but that the video staff was particularly reduced:

Among those exiting the company are popular writers and reporters like Alex Pareene, Clio Chang, and J.K. Trotter.

While some staff from almost every site took buyouts, according to several sources familiar, a more significant portion of the company’s video staff, as well employees of the post-Gawker news website Splinter, are set to leave the company.

It’s unfortunate to see further buyouts and layoffs in the sports media world, which has become all too common of a story of late. We’ll see if there are further exits at Deadspin. At any rate, Burke’s departure is certainly significant, and many of his coworkers (including editor-in-chief Megan Greenwell and managing editor Tom Ley) paid tribute to him Friday:

Burke was my first Deadspin friend, long before I worked here, and he is a terrifying genius who is also a wonderful human. And now he's abandoning me and I'm despondent about it. Please send citrus fruits. https://t.co/9vQeVStcfW

Deadspin simply wouldn't be what it is today without Burke. Long live Burke, and long live the Burkeputer. https://t.co/psUCKWO8Lb