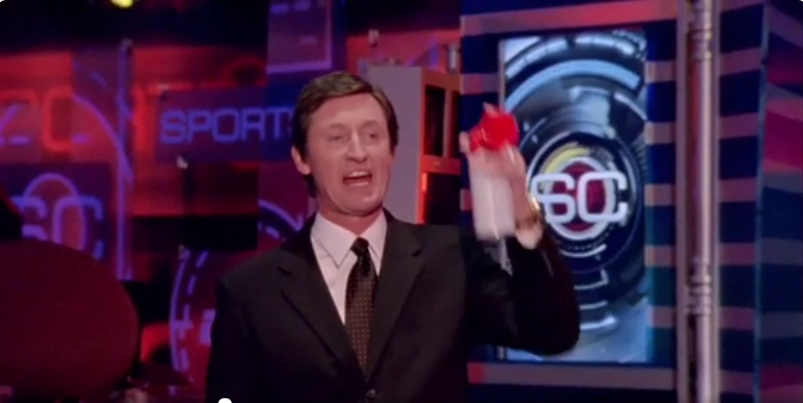 With the NHL’s national U.S. rights heading to ESPN and Turner next year, there’s been a lot of discussion about who will have on-air roles for those networks. Turner made a couple of additions on that front Wednesday, reportedly tapping Kenny Albert and Eddie Olzcyk (both currently working on NBC’s NHL coverage, plus SiriusXM in Albert’s case) as their lead broadcast team. And Sean Shapiro of The Athletic has some news on who ESPN’s been chasing, including NHL legend Wayne Gretzky:

ESPN has approached and pitched Wayne Gretzky about a broadcasting role, according to multiple sources. Whether Gretzky, an alternate governor for the Edmonton Oilers, is interested is unknown, but at this point ESPN hasn’t been given a “no.”

It’s been believed that ESPN wanted to take some big swings when it came to adding hockey personalities whose names held Hall of Fame value from their playing careers. Bringing in hockey’s universally known all-time leading scorer would certainly fit that ambition.

This does fit with some recent ESPN moves of going after prominent former athletes for commentary roles, including Peyton Manning and Alex Rodriguez. However, the success of those moves has been mixed. Manning has repeatedly turned down ESPN’s offers of a Monday Night Football role, and while he has done ESPN+ show Peyton’s Places with them, that’s a much smaller impact than a regular game broadcasting role. Meanwhile, Rodriguez has come on board with ESPN for Sunday Night Baseball commentary (in addition to his MLB postseason studio work with Fox), but his in-game commentary has taken a lot of criticism. Gretzky perhaps has a stature within his sport above either Manning or (especially) Rodriguez, but that didn’t lead to coaching success for him, and if he does come in, it will be interesting to see how he’ll do in a broadcasting role (something he’s never particularly done).

Anyway, a Gretzky move seems far from certain at this point. It’s absolutely notable that ESPN has reached out to him, and it’s also notable that he didn’t immediately decline. But, as we’ve seen through the various flirtations around getting Manning into a broadcast booth, just because a network wants someone doesn’t mean that person is going to agree. Gretzky seems to be doing just fine with his associated wine/whiskey/beer business, so he definitely doesn’t need to take this if he doesn’t feel like it. This could still happen, but at this stage, it’s notable just for the discussions rather than any imminent deal.

On a more likely and more immediate front, it’s interesting that Shapiro’s piece also includes discussions of other broadcasters ESPN may target. Three significant names mentioned there are Ray Ferraro, Kevin Weekes, and John Davidson. All three have a long NHL broadcasting history, with Ferraro recently working for TSN and NBC, Weekes working for NBC, and Davidson working for a wide variety of networks (including ESPN) before his 2006 move into the team executive ranks. Davidson was surprisingly let go by the New York Rangers this week, so he’s possibly available if he wants to return to broadcasting and if ESPN wants him. Here’s what Shapiro wrote on that front:

There was interest in Ray Ferraro by both networks, while there is some confidence according to sources, that ESPN will add him to their on-air talent pool, potentially as a lead analyst. Ferraro is one of a number of Canadian-based broadcasters that could be in play according to some industry observers after ESPN and Turner have shown a willingness to present salaries that would make moving to the United States much easier.

Both Turner Sports and ESPN have shown interest in hiring Kevin Weekes for their respective broadcasts. Weekes has also pursued NHL management opportunities recently, but as long as he’s still in the broadcast world he’ll likely find an ideal landing place in that realm.

In a similar vein, John Davidson could be in line to return to the broadcasting business after the surprising front-office shakeup by the New York Rangers on Wednesday. At this point whether Davidson has an interest in broadcasting again or not is unknown, but as one television source said, “he’d have his choice if he decided that’s what he wanted to do.”

We’ll see what this all leads to. But it’s certainly interesting to hear talk of ESPN going after big names like this.

UPDATE: Turner has reportedly pulled ahead of ESPN in the Gretzky sweepstakes because of salary demands, per the New York Post. This really is like the Peyton Manning stuff all over again, isn’t it?

[The Athletic; photo from an ESPN This Is SportsCenter ad]