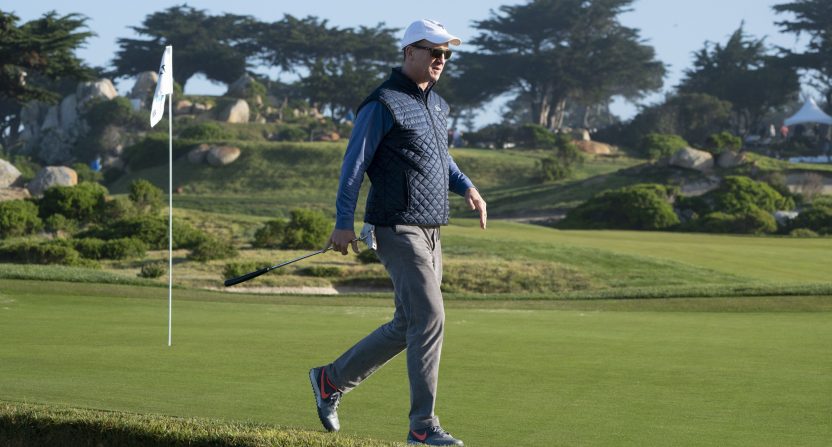 The object of every network’s desires, Manning went on Tuesday’s edition of the Rich Eisen Show and denied any interest in broadcasting for something like the 12th time since he retired.

He's been courted (reportedly) with millions, so will we see Peyton Manning in the broadcast booth anytime soon? pic.twitter.com/Hcn0nBf0Kv

Here’s the quote (with a diatribe about what Eli is doing now and how much Manning himself watches games today), in case you’re expecting something new.

“Yeah Rich, I haven’t said no forever. I’ve said no to this year, and this doesn’t feel like the right time. I hate sort of having this ‘check with me next year’ type deal, but that’s really how I’ve approached this chapter. I believe it taking it a year at a time.

“It’s not in the cards for me now, but I can’t really say ‘never’ forever.”

However, it’s hard not to see that Manning has somewhat backed himself into a corner. Tony Romo is locked in at CBS for the foreseeable future. NBC is reportedly going to hitch their wagon to Drew Brees once he retires. Troy Aikman has been entrenched at Fox for nearly 20 years since his retirement, and unless he wants to prematurely retire from broadcasting too, it’s difficult to see him leaving the Fox booth in the next decade.

That leaves ESPN, who has been looking for a long-term answer in the Monday Night Football booth since Jon Gruden went back to coaching. Manning had prime opportunities to join MNF in both 2018 (when Gruden left) and 2020 (when Booger McFarland was transitioned away from MNF), and if ESPN hits a home run with whoever they end up promoting to the position this year, it’s tough to see them going down the Manning road in two or three years.

But hey, if ESPN’s new MNF booth is a hit with fans, we probably won’t have to discuss Manning’s interest in broadcasting again. That alone is a reason to cheer for ESPN to make the right decision this time around.