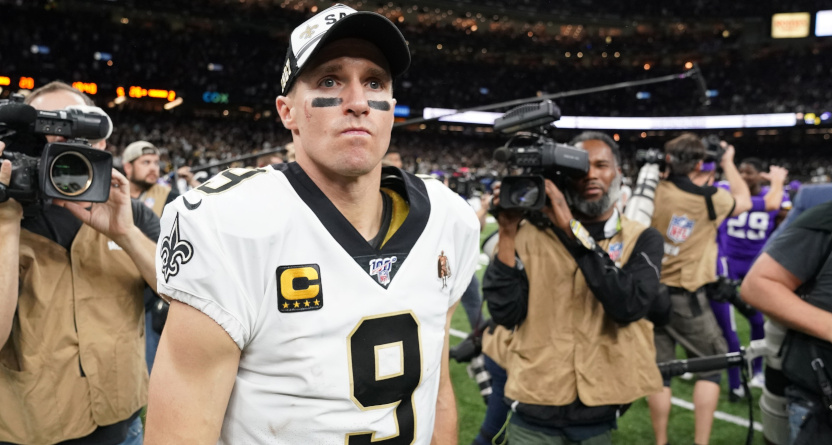 There are plenty of years-out deals made in sports when it comes to league TV rights, but it’s much rarer to see that with an individual. That’s reportedly what’s happened with New Orleans Saints’ quarterback Drew Brees, though, who Andrew Marchand of The New York Post reports has opted to sign a deal with NBC that will kick in when he retires from the NFL. That’s an interesting change, as when 41-year-old Brees was mulling his playing future this January, he reportedly received calls from “at least one non-ESPN network” (as per ESPN’s Adam Schefter), and Marchand wasn’t high on that being NBC then:

CBS, according to sources, did check in on Brees recently, while Fox and NBC have not. It doesn’t really matter, though.

The bottom line is that if Brees decided to retire, then all the networks, including ESPN, would have interest in him. NBC would make the least sense since it only has one game and has shown no indication that it is unsatisfied with Cris Collinsworth.

Brees went on to return to the NFL, though, signing a two-year, $50 million deal with the Saints in February. But that didn’t stop network interest in him. Marchand reported earlier this week that “[ESPN] is trying to sign Brees now for “Monday Night Football” after he retires. NBC and FOX also have shown strong interest in Brees post-retirement, and are willing to do deals sooner rather than later.” And now, he’s reported that NBC has in fact come to a deal with Brees:

In a contract that will begin after Brees retires from the Saints, the 41-year-old will be groomed as the potential replacement for Cris Collinsworth on “Sunday Night Football,” according to sources.

“Like all NFL fans, we look forward to watching Drew continue his Hall of Fame career this fall, and we are confident his post-playing career will be just as successful,” NBC Sports spokesman Greg Hughes told The Post.

Going directly from the field to a NFL broadcast booth can be very challenging, with Tony Romo a rare exception of it working out smoothly, so it makes sense that Marchand’s piece includes discussion that Brees is likely to start as a game analyst for NBC’s Notre Dame games (still high-profile, but not quite as high as Sunday Night Football) and as a studio analyst on the Football Night In America pre-game show, then eventually slide in (literally or otherwise) to replace the 61-year-old Collinsworth. And NBC may be able to use both as top game analysts for a while if they can add a second NFL package, or to use both in a three-man booth. In any case, it seems likely that Brees will eventually wind up alongside Mike Tirico, who NBC has pegged to take over from Al Michaels (with Marchand previously reporting that transition will take place after the 2022 Super Bowl), on the top NBC package.

Of course, there’s a lot of uncertainty here about the timing. No one knows right now if the 2020-21 NFL season will start on time (or even at all). And it’s certainly possible that Brees might play the 2020-21 season, then retire to join NBC for 2021-22. But with him being on a two-year contract, he could also play in 2020 and 2021 before heading to the broadcast booth. Saints’ head coach Sean Payton did refer to 2020 as Brees’ “final season” last week, but then walked that back and said he hadn’t heard that from Brees and that “I think his plan is to take it year by year.” In any case, the uncertainty here could perhaps be part of why Brees chose NBC over ESPN (with both reportedly offering around $6 million annually); NBC only needs him as part of an eventual succession plan, while ESPN is looking to fill the Monday Night Football booth more quickly.

At any rate, it’s fascinating to see Brees so in demand from all these networks before he’s even called a game, and it’s particularly interesting to see him signed to a contract that won’t kick in for a year or two. There are occasionally people who sign with one network and finish out the string at another first (including Colin Cowherd in his move from ESPN to Fox), but those strings are usually measured in weeks or months rather than years. Locking up someone for broadcasts that at best are a year and a half away (and may be two and a half years away) is pretty unusual. And it shows the value these networks have placed on Brees.