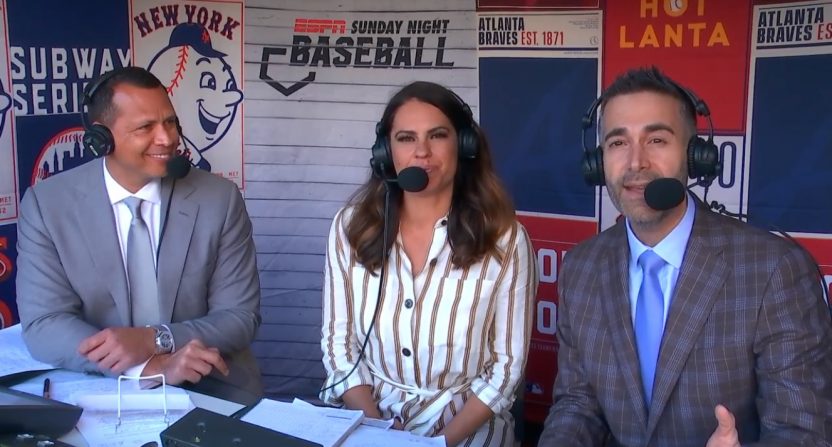 Less than a month after pulling Jessica Mendoza from Sunday Night Baseball, a demotion classified as a promotion, ESPN won’t be replacing her in the booth and will roll out a two-man team in 2020.

On Thursday, ESPN announced that the duo of Matt Vasgersian and Alex Rodriguez, both in their walk years, will team up in the Sunday Night Baseball booth this season. As always, changes could happen after the season, especially with the contracts of both announcers expiring. This is the first time that SNB will have a two-man booth for more than a week or two since the 2014 season, when Dan Shulman and John Kruk teamed up while Curt Schilling underwent treatment for cancer.

In reality, this was the most logical (and likely to be the least well-received) move for ESPN – they definitely weren’t going to move Rodriguez off Sunday Night Baseball (given that it’s their premier MLB broadcast of the week), dumping Vasgersian in favor of another announcer would have been weird since he only has one year left on his contract, and adding a third person to the booth could have resulted in a situation ESPN found themselves in two years ago, where they had one analyst penciled in for Sunday Night Baseball (Mendoza) and still had to replace their play by play broadcaster (Shulman, in that scenario) and a second analyst (Aaron Boone). If you’re going to roll with a three-person booth, starting with the analyst who seemingly has the lowest profile doesn’t seem to be the best course of action.

Sunday Night Baseball’s lack of continuity over the last decade has been, by far, its biggest problem. Jon Miller and Joe Morgan worked together without a second analyst from SNB’s debut in 1990 until 2008. Then, Steve Phillips joined for a year before he was fired. Orel Hershiser replaced Phillips and spent for years on the broadcast team, but Miller and Morgan left after the 2010 season. Dan Shulman took over on play by play in 2011, and him and Hershiser worked with Bobby Valentine in that first year, Terry Francona in 2012, and Kruk in 2013. Hershiser left for the Dodgers’ SportsNet LA following the 2013 season, and he was replaced alongside Shulman and Kruk with Schilling. Schilling missed most of 2014 while battling cancer, returned in September, and was suspended and removed from Sunday Night Baseball in 2015 (before being fired in 2016). He was replaced by Mendoza after that initial suspension, and Boone replaced Kruk in 2016 (before Kruk left the company at the end of that MLB season).

Got all that? That’s a whole lot of change on what a network feels is their top package for a sport. Fox has only made two major changes to their top MLB package over the same period (replacing Tim McCarver with Harold Reynolds and Tom Verducci, and then replacing Reynolds and Verducci with John Smoltz). Turner, on the other hand, has consistently used Ernie Johnson and Brian Anderson as their top Postseason play by play broadcasters over the last decade, and paired them with one or two of several analysts, including Smoltz, Ron Darling, Cal Ripken, and Jeff Francoeur, for the LCS.

Whatever happens with Rodriguez and Vasgersian, here’s hoping ESPN finds some kind of permanent solution to their Sunday Night Baseball woes. The game of musical chairs needs to stop one of these years, right?