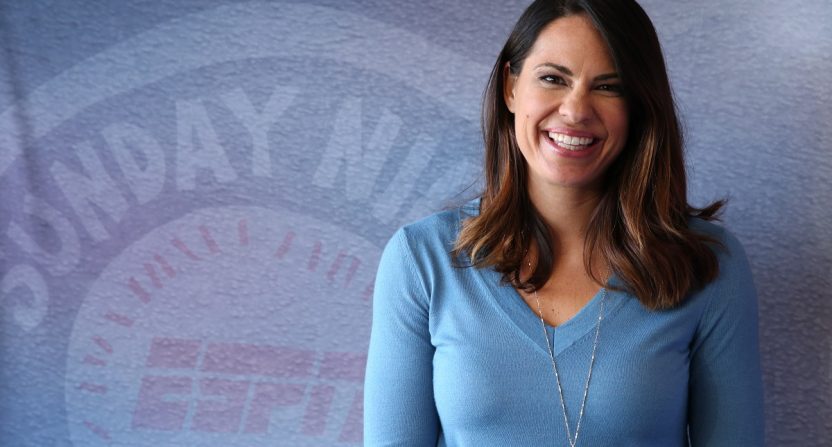 It appears that ESPN is set to take Jessica Mendoza off Sunday Night Baseball. There’s been a lot of criticism of the “disaster” of the current SNB booth (Matt Vasgersian, Alex Rodriguez, and Mendoza) overall, and Mendoza in particular herself has been under incredible fire recently for her comments across ESPN shows bashing Mike Fiers for blowing the whistle on the Houston Astros’ electronic sign stealing (which drew extra criticism considering her role with the New York Mets and their hire of key Astros’ scandal figure Carlos Beltran).

Now, Andrew Marchand of The New York Post has reported that Mendoza appears set to be reassigned, although it’s not 100 percent certain yet:

ESPN is working toward removing Jessica Mendoza from its “Sunday Night Baseball” booth, The Post has learned.

As for the rest of the SNB booth, ESPN executives are still determining its plan, though, Alex Rodriguez has been assured that he is welcomed back, according to sources.

Matt Vasgersian’s status as the lead play-by-player remains in question with Jon Sciambi and Karl Ravech potential replacements, according to sources.

…Mendoza, according to sources, has not been fully informed she is off SNB so that is why the decision is not 100 percent just yet. In theory, ESPN could change its mind.

If the removal of Mendoza from SNB does come to pass, it seems likely that she’ll appear on various ESPN studio programs and will perhaps call weeknight games as well. And it also appears likely this will be just the latest case of ESPN moving someone to a less-prominent role but insisting that it’s not a demotion. There have been a lot of cases of that over the years, from Mike Ditka (NFL Countdown to “SportsCenter contributor”) to Brent Musburger (ABC primetime games to SEC Network). Now, it seems Mendoza will be joining that group.

Mendoza joined ESPN as a college softball analyst in 2007, then joined Baseball Tonight (remember that show?!) in 2014 and also contributed to MLB telecasts that year. She then became the first female analyst to call the Women’s College World Series for ESPN, sitting in the booth alongside Karl Ravech and Kyle Peterson, and then became the first female analyst to call a whole ESPN MLB game in August 2015, working on Monday Night Baseball with Dave O’Brien and Dallas Braden. Not long after that, she replaced Curt Schilling (fired for his anti-trans comments and his defense of them) on SNB, first as a fill-in, then for the rest of the season, and then on a permanent basis.

There’s a lot that’s tied up with discussions of Mendoza. Some of the criticism of her, including from media personalities, has absolutely been sexist and unfair. And even when it comes to discussions of her dual role as a Mets employee and an ESPN announcer, the many former MLB players who have positions with teams as well as media roles aren’t always brought up as well. But there is an argument that Mendoza appears to have a more influential front office role than many of those ex-players, which adds a layer to that debate.

There is also legitimate criticism to be made of Mendoza’s on-air commentary that isn’t necessarily coming from sexism, especially when it comes to the (lack of) booth chemistry with current SNB partners Rodriguez and Vasgersian. How much of that’s on Mendoza and how much is on her partners is certainly up for debate, as is if removing Mendoza is the best fix here. But it appears to be the fix ESPN is choosing.