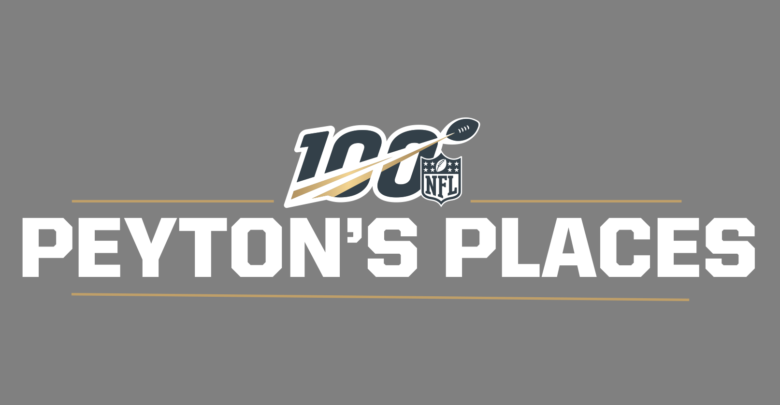 Some more details have come out on the upcoming 30-part Peyton’s Places NFL Films show, heading to ESPN+ this summer before appearing in compilations on ESPN and ABC. Peyton Manning, the show’s host and also an executive producer, told Barry Wilner of The Associated Press this came after NFL Films approached him to “tell the story of the past 100 years.” So the show’s focused on exploring critical moments in NFL history, something Manning said was a lot of fun for him to do:

Manning dived all the way back to Ralph Hay’s Hupmobile showroom in Canton, Ohio. He spent time with members of the undefeated 1972 Dolphins; rewatched Super Bowl 3 with Joe Namath; discussed the Immaculate Reception with Steelers and Raiders to get the Pittsburgh and Oakland viewpoints; and discovered intriguing connections to the NFL for Richard Nixon, Jay Leno and Elvis.

“We got to go down memory lane,” Manning says. “I have always loved the history of the game and I have learned a lot during this journey, and spent some time with some of my favorite players and contemporaries of my dad (former Saints star quarterback Archie Manning) and guys he looked up to.

“NFL Films has all this great archives of (Bears founder) George Halas talking about being in Ralph Hay’s Hupmobile showroom, (Giants owner) Wellington Mara talking about how Vince Lombardi wanted him to take Polaroids and throw them down to the field when Vince was coaching with the Giants. To maybe re-enact it or kind of tell that story, it’s kind of why I signed up for it.”

The connections to Nixon, Leno and Elvis are interesting, and they’re explored further in Wilner’s story. Famed car collector Leno weighs in on the story of the Hupmobile, the car that several owners were sitting on “drinking Prohibition beer” while they discussed founding the league. Elvis is mentioned thanks to a visit to Graceland, which sees Manning discussing how Presley staged impromptu football games locally and had three TV sets on hand so he could watch as much football as possible, a tip he supposedly picked up from former U.S. president Lyndon B. Johnson. And speaking of presidents, the show discusses Nixon thanks to his role in asking Pete Rozelle to lift blackouts so he could watch the Redskins, and then his role in applying legislative pressure on the NFL when Rozelle declined.

There are also plenty of reenactment moments in here, including Manning having Deion Sanders try to teach him to play defensive back (in honor of Sammy Baugh, who was a safety and punter as well as a cornerback) and Manning throwing a ball off a 23-story building to Cris Carter (replicating a stunt Lynn Bomar and Hinkey Haines of the New York Giants pulled in 1926). There’s more on that in ESPN’s release on this:

Peyton, who also serves as one of the show’s executive producers, says: “This is a journey through 100 years of history, visiting the people and places that have made the NFL what it is. From throwing a football off a skyscraper to re-enacting the Immaculate Reception and running Elvis Presley’s football plays, every episode on ESPN+ will surprise even the most die-hard fan.”

Connor Schell, ESPN executive vice president, content, added: “Peyton is a football legend and has contributed so much to the game throughout his career, making him the perfect steward to take fans on this journey through the 100-year history of the National Football League. His sense of humor, wit, and reverence for the traditions of football will produce wonderful stories for this series on ESPN+.”

And here’s a preview of this:

The ESPN release also outlines how this will be presented in five chapters, each containing six episodes. Each of those will first go to ESPN+, then eventually to TV. “ESPN or ABC will air special compilations, recapping each part after the full episodes debut on ESPN+. Part 1 will be available on ESPN+ on Monday, July 15, while Parts 2–5 will debut in subsequent months through January 2020.” We’ll see how these are received when they debut.