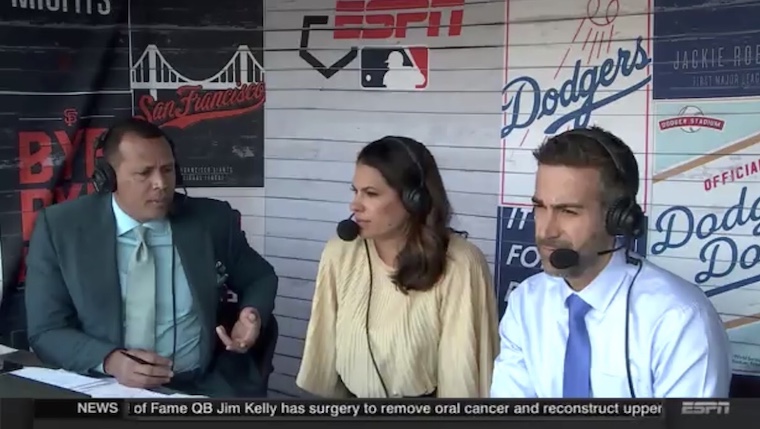 Matt Vasgersian had it right. Most viewers were going to tune in for the debut of ESPN’s new Sunday Night Baseball crew looking for mistakes from the trio of Vasgersian, Jessica Mendoza and Alex Rodriguez, rather than watch the opening day primetime broadcast of the San Francisco Giants-Los Angeles Dodgers game.

So let’s get right to those mistakes we all noticed!

Actually, let’s begin by saying what’s probably obvious but should be kept in mind for a broadcast team’s first game together. Chemistry has to be developed. Each person in the booth has to get a feel for what their colleagues want to do. A play-by-play announcer learns how to set up his or her analysts, and those analysts develop a sense for the best time to talk, when to offer something more in-depth as opposed to recapping what’s on screen.

Good broadcasters make it sound and feel easy, which creates the impression that a team should pick things up quickly and smoothly. After all, everyone’s just talking, right? But it’s bound to be bumpy with a play-by-play getting a national showcase, an analyst who some unfortunately feel shouldn’t be in the booth and a celebrity personality who’s calling games for the first time.

So the first broadcast for Vasgersian, Mendoza and A-Rod was going to be choppy. And as Vasgersian noted, scrutiny was going to be much more intense than for subsequent telecasts. But here are a few takeaways from the SNB team’s debut:

No one was going to be scrutinized more intensely during this opening telecast than Alex Rodriguez. How would he fare in transitioning from the studio to the broadcast booth. A-Rod has drawn plenty of praise for his astute analysis, smooth delivery and made-for-TV appearance in his postseason work for Fox Sports. But there’s a big difference between speaking in smaller sound bites with a host teeing up the shot and elaborating a bit more throughout a game broadcast.

Rodriguez did show some flashes of what makes him a good analyst, particularly when explaining how Clayton Kershaw’s slider makes it so difficult on right-handed hitters. This is presumably where A-Rod is expected to shine, showing the prep work that impressed producers at Fox so much. Baseball fans will surely eat that up throughout the season, and viewers might feel as if they learn something from listening.

But through most of the broadcast, Rodriguez came off as jumpy and awkward as most viewers probably expected. Attempts at jokes or witty observations such as “31 is the new 41 in baseball” when talking about Buster Posey being the leader of the Giants clubhouse fell flat and didn’t make much sense. That left Vasgersian to try and make the save or move on quickly so the strikeout didn’t linger.

What we can definitely take away from this opening broadcast is that A-Rod is no Tony Romo. At least not yet. Romo earned so much acclaim in his initial telecasts for showing off his football aptitude by predicting plays before they happened. It certainly felt as if Rodriguez tried to imitate Romo and look smart by predicting what a pitcher would throw to finish a hitter off. But A-Rod consistently swung and missed here.

The second time it happened, Vasgersian seemed to call A-Rod out for predicting a 3-2 changeup from Giants pitcher Ty Blach when he actually threw a four-seam fastball.

Here’s one more example when A-Rod predicted a slider and Clayton Kershaw threw a curveball, which Mendoza noted.

Plenty of viewers probably rolled their eyes when Rodriguez’s world-famous girlfriend, Jennifer Lopez, stepped into the booth to say hello. But weren’t most of us expecting something like that to happen? Otherwise, a potential J-Lo appearance would’ve hung over the broadcast, maybe compelling Vasgersian to joke about it.

As it stands, however, A-Rod’s celebrity status and occasional insistence on trying to portray himself as a relatively normal guy should create some comedy during the broadcast. Mendoza and Vasgersian teased Rodriguez later on when he shared a story about carpooling with CC Sabathia, as though they were just a couple of fellas sharing a ride to the ballpark. Hopefully, poking fun at the Lifestyle of A-Rod becomes a recurring theme throughout the season. Rodriguez will win a lot of favor if he accepts the ribbing good-naturedly too.

Get in there, Jessica Mendoza!

Unfortunately, A-Rod trying to find his footing in the booth probably hurt his fellow analyst the most. Mendoza was rather quiet throughout the telecast, surely in a generous attempt to let Rodriguez find a comfort level. There were a few times when she would even try to set A-Rod up in talking about a hitter’s approach in certain situations or what a pitcher was trying to do in particular counts.

This seemed to highlight why having two former hitters in the booth as analysts, rather than one hitter and one pitcher, could be problematic. Mendoza has done a good job during her two seasons on Sunday Night Baseball explaining what a hitter might be looking for and how to handle how pitchers approach them. She ceded a lot of that territory to A-Rod Thursday night, but hopefully the two of them can find a balance there.

Otherwise, Mendoza will become the de facto pitching analyst, focusing more on how the pitcher is trying to attack the hitter, rather than lend insight on what batters are looking for and how they approach a pitcher’s best stuff.

By not making any notable mistakes, working hard to make his analysts look good and attempting to keep the telecast moving smoothly, the standout for the Sunday Night Baseball crew’s debut was Vasgersian.

A few people will ding him for his home run call in the fifth inning, mistakenly reading Joe Panik’s drive down the right-field line as a foul ball. Considering it turned out to be the only run of the game, Vasgersian’s uncertainty and lack of excitement stood out. Viewers were probably eager to hear something close to a signature home run call, as well. But there will be plenty of opportunities for that.

As the fourth person on the Sunday Night Baseball team, Buster Olney was solid, as usual, in his role as sideline reporter. Early on, he provided details on the many injuries that the Giants’ pitching staff is already dealing with and how that could be a major factor with 10 games against the Dodgers during the first month of the season. And he also provided some comic relief by clarifying that the virus going through the Dodgers clubhouse and getting everybody sick was referred to as “the crud.”

It’s surely unfair to grade a new broadcast crew on their first game. Critics and viewers were looking for the stumbles to point out. Vasgersian, Mendoza and Rodriguez will surely get better. It was probably inevitable that A-Rod would try too hard to impress in his game broadcast debut. But let’s hope his colleagues and producers told him that he doesn’t have to talk so much (especially if it handcuffs Mendoza) or imitate Tony Romo’s predictive abilities. Otherwise, this could get rough.