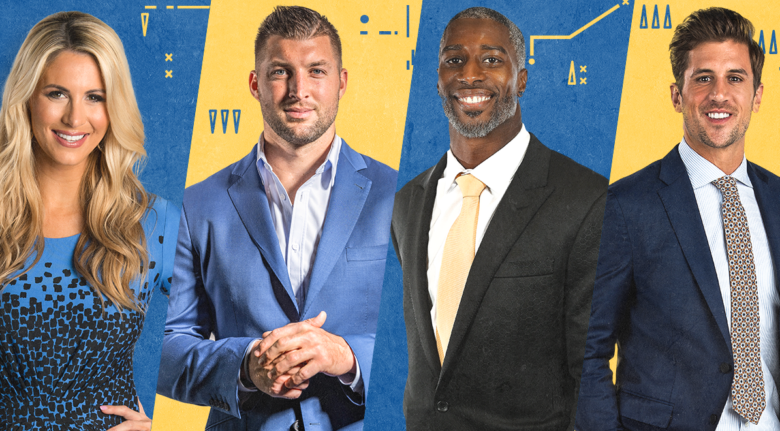 Around the launch of SEC Network in 2014, one of the most-anticipated studio shows was Saturday morning football preview show SEC Nation, and a key part of the interest in it was the decision to take it on the road to SEC games each week and feed off fan energy there (much like the 1993 move that helped ESPN’s College GameDay go “from a show to an event“). Well, SEC Nation is now heading into its seventh season (beginning on Sept. 19, the first SEC game day), but this year will see not only further cast changes, but also a shift to broadcasting the show remotely rather than from campuses. Here’s more from an ESPN release on that:

The show will look a bit different this fall, with host Laura Rutledge based in ESPN’s Bristol studios, newcomer Roman Harper live from SEC Network’s studios in Charlotte, and SEC Network veterans Tim Tebow and Jordan Rodgers set up in their home studios. It’s a format that has become commonplace throughout the COVID-19 pandemic, and the football foursome is ready to show SEC fans how fun Saturdays will be on SEC Network this fall.

“Hosting television has changed so significantly these past several months, and we’ve all had to adjust as the world around us has changed,” Rutledge said. “This season will look different for SEC Nation and in stadiums around the SEC, but what hasn’t changed is what a blast we have together every Saturday. We’re all counting down the days until the first show.”

Despite SEC Nation originating from studio, fan interaction will continue to be part of the show, with further details to be unveiled on the season premiere.

“The biggest priority for our production team is making sure we still bring fun and football to our fans every Saturday, and we’re set up for that with this format” said Baron Miller, SEC Network coordinating producer. “We’ll miss traveling around the conference and spending Saturday mornings with SEC fans, but if the last six months have taught us anything, SEC Nation is more connected than ever. I know we’ll still feel their energy and have them with us on Saturdays.”

This is an understandable move, as many games this fall may have limited to no fans present thanks to the COVID-19 crisis (and that’s if these games do go ahead as planned, something that also isn’t certain at the moment). And arranging for a travelling studio show is challenging enough in normal times, and there are countless further complications to that in a pandemic. But it’s definitely still notable to see a show that once used its location as a key feature relocating to a studio setup. (And it’s interesting that College GameDay itself is still planning road trips; its Sept. 5 debut will be from a combination of Bristol and analysts’ remote studios, but will include the announcement of their first road trip location, with that road trip taking place on Sept. 12.)

It’s also interesting to see SEC Nation going to a setup broadcast not from one studio, but from four separate ones. Yes, there are a lot of broadcasts at the moment that feature analysts from home studio setups (and that sometimes happened even before the pandemic), and yes, network technical staff now have months of experience at incorporating remote feeds. And it sometimes can work out quite smoothly. But there are additional challenges for any show where the cast’s in even two different locations, to say nothing of four.

Of course, there’s some obvious logic to this from a health and safety standpoint, especially when it comes to minimizing travel for the cast members. There’s no need to be bringing Harper, Tebow and Rodgers up to Bristol each week just for this, and it makes sense for Rutledge to stay there given her work on NFL Live (shot in Bristol) and Get Up (shot in New York). Now, Rodgers will still be calling SEC Network night games, so it will be interesting to see how that works out with him (will he be broadcasting from hotel rooms in the appropriate city each morning, or travelling to the game after SEC Nation wraps up?), but it makes sense not to have him in the Bristol or Charlotte studios. And while Tebow doesn’t have a minor-league baseball career to pursue at the moment thanks to the cancellation of the MiLB season, it probably still makes sense to have him doing this particular once-a-week contribution remotely rather than heading to an ESPN studio. But it will be worth keeping an eye on this broadcast to see how well it works out from four different locations, none of them at games.