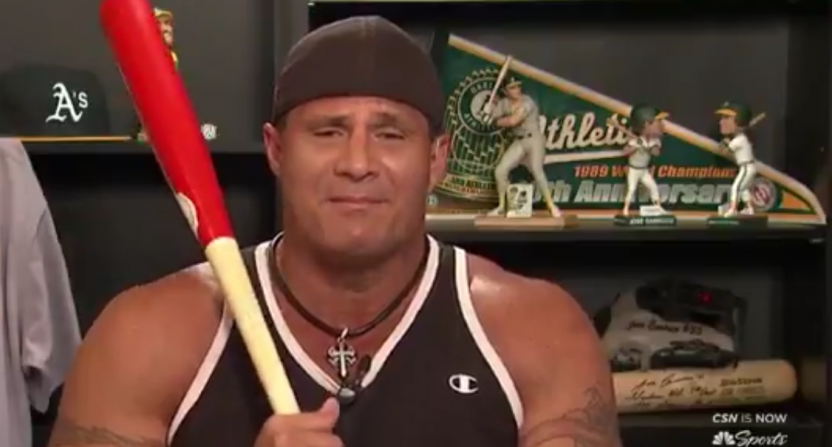 One of the big current trends in broadcasting is trying to alter the format of advertising to keep viewers engaged during commercial breaks. This has been particularly important for scripted programming in an attempt to keep people from just fast-forwarding through commercials on their DVR, but it’s taking hold in sports as well, and doing so on numerous different levels.

We’ve seen the NFL modify the format of its commercial breaks (fewer but longer breaks, less commercial-kickoff-commercial sequences), we’ve seen various dual-box attempts with the sport in one box and the commercial in another, we’ve seen Fox’s on-demand video offer a choice of short engagement-focused ads or longer traditional ads, we’ve seen Disney CEO Bob Iger talk about investigating a reduction in ad load across ESPN and ABC, and now we’re seeing more and more “sponsored segments” in place of traditional commercials.

Here’s one example. On the Oakland Athletes’ NBC Sports California broadcast Tuesday, instead of a regular ad, their T-Mobile sponsored segment went to new hire Jose Canseco for some analysis:

This is WAY better than a commercial break. pic.twitter.com/ZtsgMFjyXy

This one is clever, as even the title (“Unlimited Baseball Break”) gets across what T-Mobile is trying to sell, their unlimited data plans. The execution is a little funny, as it has two people in the regular studio and Canseco on a screen. But hey, that does allow us to see Canseco’s superb backdrop of bobbleheads, jerseys and other memorabilia. And he’s really refining the analyst uniform here:

Postgame analysts need to take note. Jose changing the game on what you can wear. pic.twitter.com/1A8yUSHU0P

Here’s another one, where Canseco drinks a protein shake on-air and uses a bat as a prop:

These segments have become much more prominent recently. Other local MLB broadcasts have used similar approaches, including the New York Mets’ broadcast on SportsNet New York. Turner Sports has also done something along these lines on a national level with “superpods” (single-advertiser breaks that include analysis with branded signs and then a 60-second commercial) on their ELEAGUE and NBA Players Only broadcasts. Turner executive vice president Craig Barry told Awful Announcing in February the plan with the NBA superpods was to keep viewers engaged:

“We wanted to make as much content in this show as possible,” he said. “We wanted to be innovative around ultimately the viewing experience. If I had my way as a content purist, I’d remove all the commercials, but I’m walking before I can run. So we had an opportunity to keep the viewer engaged instead of going to commercial break and create a better viewing experience, bring in Kevin Garnett, who is super charismatic and a Hall of Famer in his own right and brings a different dynamic and a different lens to the game in his own right, and for me, it was just another asset we could leverage. I wanted it to be the best possible and most innovative experience for the viewers.”

Turner’s sales for the superpods have reportedly been good so far, and the increase in sponsored segments on other broadcasts like this Athletics’ one suggests that advertisers see value in this idea. It does have several advantages; one is that viewers are less likely to get up for a beer or a bathroom break if the “ad” content is actually interesting, and analysis from former players can fit that mold (especially if it’s an opinionated personality like Garnett or Canseco). We’ve even see some teams try this in-stadium, throwing to a panel of former players while the game’s on commercial break to try and hold fans’ interest.

Another edge is that having only a single advertiser or sponsor means fans aren’t hit with a multitude of messages during a single break. They’re seeing one branding push, and one only. However, those are theoretical edges. The key question in practice is if they make up for the extra cost and less direct marketing involved in this approach.

From a viewer’s standpoint, it mostly seems great to replace traditional ads with sponsored content. This is extra value for the viewer; it’s discussion of the game with marketing thrown in instead of a pure attempt to sell you something unrelated. And it doesn’t stop you from doing anything; if you’re not particularly interested in the analysis, you can still get up and do whatever else you want to. But whether we’ll see this trend continue is going to depend on if the advertisers in question actually see results.

In order for the broadcasters not to lose money on this, they’d need to pull in as much from the sponsor/single advertiser as they would from a regular commercial block (or make slightly less for that slot and hope that it will be overcome by increased ratings or attention, but that seems more tenuous). Advertisers may be willing to experiment with this for now, and it’s an exciting trend to get involved in. But these companies keep a close eye on their marketing budgets and if they’re delivering results, and that’s particularly true when it comes to new approaches.

If sponsored segments prove effective relative to cost in improving brand recognition or purchases, fantastic, and we’ll see many more of them in the years to come. If the return on investment doesn’t show up relative to traditional advertising, though, the trend may not last all that long. We’ll see how it works out, but this is certainly something to keep an eye on.