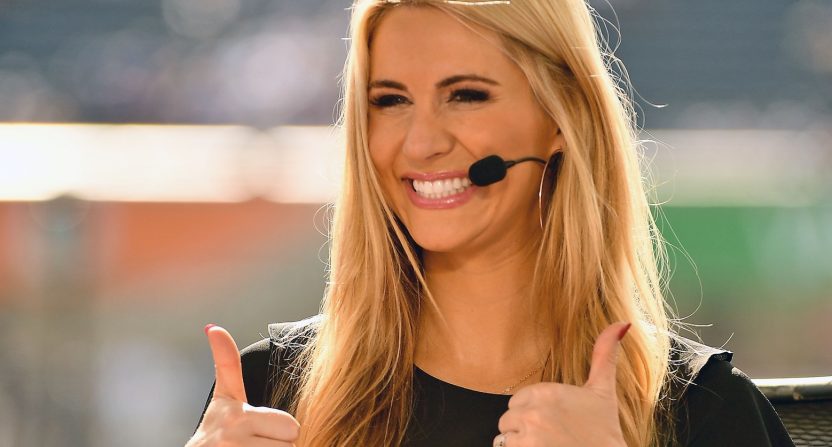 SEC Nation host and Get Up correspondent Laura Rutledge has agreed to a new multi-year contract extension with ESPN. The news was originally reported Sunday night by The Big Lead’s Bobby Burack (who says the extension is for five years) and confirmed by the network Monday morning.

It’s the second extension Rutledge has signed with ESPN, having previously agreed to one in 2018.

Rutledge has been with ESPN since 2014. Following work as a reporter and play-by-play commentator on a variety of college sports, she joined SEC Nation on ESPN’s SEC Network and soon became the show’s host, a position she’s held for the past three seasons.

Incredibly thankful and excited for this opportunity. https://t.co/5mb4MCUuvQ

As part of her new deal, Rutledge will become a permanent contributor to ESPN’s morning show, Get Up. She’s been on the show as a correspondent since last fall, joining the program following Michelle Beadle’s departure. Rutledge was an ideal fit for a morning show format, having performed a similar role for CNN’s New Day and Early Start, in addition to HLN’s Morning Express.

Though she hasn’t been a regular on Get Up since going on maternity leave in September, Rutledge is expected to return in December.

Rutledge recently resumed hosting duties on SEC Nation. The show will be in Oxford, Mississippi this Saturday in advance of the Ole Miss-LSU matchup.

“Laura is both incredibly talented and hardworking, and has been a standout addition to Get Up,” said Norby Williamson, ESPN executive vice president for studio production, in an official statement. “She continues to deliver on-air daily, regardless of assignment, and we’re eager to have her transition into this new role. We couldn’t be more pleased that she’ll be staying with ESPN for years to come.”