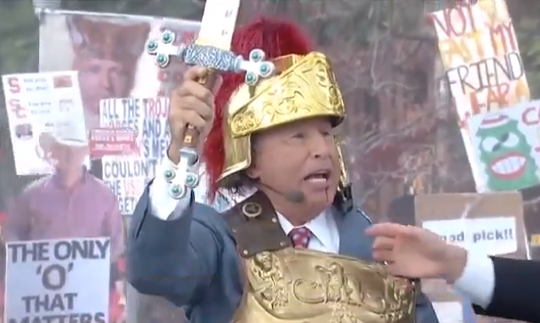 Twenty years ago this week, on Oct. 5, 1996, one of college football’s most enduring traditions was spawned when ESPN analyst Lee Corso donned a mascot head on College GameDay to indicate his pick of Ohio State over Penn State. Decades later, that tradition is still going strong, and it’s proven to be a key regular feature for the show. Corso and Lee Fitting, ESPN’s senior coordinating producer for college sports, both spoke to Awful Announcing this week about how the headgear tradition came around, what it’s meant for the show, and how long it might persist. First, Fitting said the mascot pick provides one of the most identifiable moments across all of television:

“Not only has it meant the world to College GameDay, it’s given the show a staple and a moment that cannot be repeated in sports TV or TV as a whole,” Fitting said. “But more importantly, Coach and his headgear have meant more to college football and the rise in popularity of college football than anything else in the last 20 years.”

Corso said it all started 20 years ago in Columbus thanks to some help from fellow analyst and former Ohio State quarterback Kirk Herbstreit.

“Well, we happened to be in Columbus, and [Brutus] the Buckeye walks by, and I said to Kirk Herbstreit, ‘You know, you went to school here, see if you can get me that head so I can just put it on. Then I won’t have to say anything, I’m picking Ohio State,'” Corso said. “So, the next day, my turn came, and I put the head on, and the crowd went crazy, the truck went crazy, and people at ESPN really liked it. And I said ‘Oh boy, I’ve got a shtick here, I think I’ll stick with it.”

Since then, Corso has donned 281 sets of headgear heading into this weekend, 55 unique ones. His record with the headgear is 186-95, including that first win where the Buckeyes beat the Nittany Lions 38-7. He’s also 45-26 when picking a game involving a top-ranked team. He’s donned headgear in 75 different cities, and there are all sorts of interesting notes on how he does with different teams, provided by ESPN researcher Chris Fallica. For example, Corso has picked Alabama the most (24 times, and he’s 16-8 there), has his best winning percentage in games involving USC (16-0 when he picks them, 5-0 picking against them), is 13-6 when picking for his alma mater of Florida State and 5-2 when picking against them, and has his worst luck when picking Georgia (0-4 picking them, 7-4 picking against them) and picking against Oklahoma (4-11). He’s done very well picking against Notre Dame, though, going 9-5 in picks against the Irish. It says something about how long this tradition’s lasted that there are those kinds of extensive stats to pull for it. Fitting said it doesn’t feel like it’s been 20 years, though.

“No, it doesn’t,” he said. “Time flies when you’re on the road and in TV, coming and going every week, but it’s amazing. How many things, not only in sports television, but in television, stand the test of time for 20 years? There aren’t many things; I’m sure you can count on one or two hands things that have been popular that have ran for that long on television. It’s awesome, and it’s awesome because it’s real. There are so many things in this day and age in sports TV, in studio programming that aren’t real, that are contrived, that are made up, that are doing things just to do them. But this is real, and Coach Corso is as real and genuine as you can get.”

Fitting said reviewing the headgear skit with Corso is regularly one of the highlights of his week.

“I’ve talked to Coach Corso every Wednesday or so for the past 13 years to go over the headgear skit, and it’s the favourite part of my week when he calls me at 10 o’clock on Wednesdays and we review what he’s going to do. We laugh our asses off about what we’re going to do. And the one thing I think people should know is he truly picks who he thinks is going to win the game. He doesn’t give a shit about anything else. It’s great; there aren’t any many other things like it in television, and I’m happy to be a small part of it.”

As for Corso, he said the longevity of the segment’s particularly impressive considering that it would have been easy for ESPN to dump him after a stroke a couple of years ago.

“It means I lasted at ESPN!” he said with a laugh. “But, I’ll tell you, one thing it does mean, I had a stroke about two years ago, and ESPN could have dumped me, no question about it. But they didn’t, and that showed me a lot about ESPN and the people that work there. They gave me a chance to recover, and they now have modified my schedule some to give me a chance to rest. That speaks volumes of the company. That’s the thing, the most impressive thing about these 20 years, is that ESPN gave me a shot after I had the stroke.”

College GameDay has changed significantly in those 20 years, and Corso said the biggest change is in the reception it gets on campuses, which shows why it was so essential to take it on the road. The show started in 1987 (with Corso as an original commentator alongside Beano Cook and host Tim Brando), but first went on the road in 1993, and Corso said that’s been a key to the show’s long-running success.

“It used to be a show, now it’s an event,” he said. “People come the night before and stay all night and all day to see it. There’s people around doing things like a party. It really has been wonderful. Because I think the secret of College GameDay is when we went on the road. We went on the road in 1993 to the Florida State – Notre Dame game, and it became a hit from that moment on, a tremendous hit. We’ve been going on the road for many, many years since then, and it’s been tremendous, the guys do a tremendous job putting it on the air.”

Corso said he never envisioned being there this long.

“Are you kidding me? You don’t last this long in television! I’ve been there about 27 years and it’s amazing,” he said. “But again, you’ve got to remember, at the time I was in the most need, ESPN was at its best. Because the stroke affected my speech and I could hardly talk, and I eventually got back to talking and they stuck with me.”

Fitting said the 81-year-old Corso has proven to be among ESPN’s best and most notable analysts, and he sees him sticking around as long as Corso wants.

“You know, as long as he wants in my book,” Fitting said. “He’s earned that right, he’s helped build the show and build the sport, and he’s on the Mount Rushmore of analysts at ESPN. He’s in that chair as long as I’m around, and as long as he’s able to do it.”

Meanwhile, Corso said he’s amazed he gets paid for this, and he loves it so much he wants to keep it up.