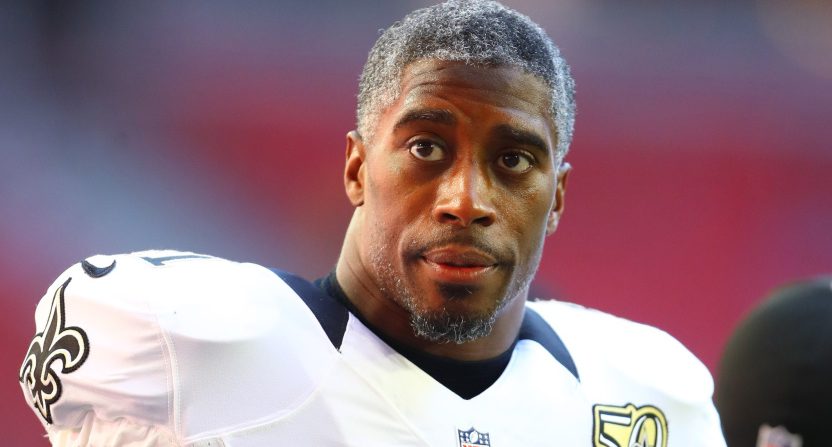 If the SEC football season does go ahead as planned this fall, SEC Network’s Saturday pre-game show SEC Nation will look quite different than it did last year. ESPN officially announced Tuesday that they’ve brought in Roman Harper as a SEC Network analyst, including for SEC Nation, and that they’ve also added long-time SEC Network analyst Jordan Rodgers to that show. Harper (seen above with the Saints in 2016) and Rodgers will be joining returning analyst Tim Tebow and returning host Laura Rutledge, and they’ll be filling seats most recently held by Paul Finebaum and Marcus Spears (both still at ESPN, but in other roles). Here’s more from Amanda Brooks’ release at ESPN Press Room:

“The opportunity to join SEC Network means the world to me, and it’s something I’ve been working toward for a long time,” Harper said. “Since my playing career ended, I’ve been focused on being the best version of myself as an analyst. I never saw this career opportunity coming in my life, and I take the responsibility of having a valued voice in this conference and on this network very seriously.”

The additions of both Harper and Rodgers are definitely interesting here. Harper may be more familiar to the general public for his 11-season NFL career (including nine with the New Orleans Saints; in June, he was announced as a 2020 inductee into the Saints’ Hall of Fame), but before that, he was a three-year starter at safety at Alabama, and he earned a second-team all-SEC nod in his junior season (2004) and a first-team all-SEC selection in his senior season (2005). So he certainly has plenty of experience in the college football world as well.

Meanwhile, Rodgers is not new to SEC Network. He’s been there since the network’s launch in 2016, starting as a studio analyst, then becoming the main analyst on their featured SEC Saturday Night broadcasts in 2017 (alongside play-by-play voice Tom Hart and field analyst Cole Cubelic). But he is new to the morning pre-game show. And it’s interesting that the release notes he’ll retain his SEC Saturday Night duties; SEC Nation is sometimes in the same location as SEC Saturday Night, but not always, so this could lead to some Saturday travel for Rodgers similar to what we’ve seen from Kirk Herbstreit in his shifts between morning show College GameDay on ESPN and the prime-time game on ABC. (This may mean that Rodgers, like Herbstreit, becomes one of the very few people at ESPN cleared to use a private plane.)

It’s also interesting to see Spears and Finebaum moving off SEC Nation. Finebaum is still reportedly in contract negotiations with ESPN for the future (his current contract expires after the 2020 season, and there have been reports that he could be on the move), but for the moment, it looks like his main role there will be with his daily radio show (simulcast on SEC Network). Meanwhile, Spears was announced earlier this summer as a daily analyst on the revamped NFL Live on ESPN (which will be hosted by Rutledge), and he also regularly appears on other ESPN studio shows like Get Up and First Take. He seems to be shifting into more of a NFL-focused role, so it makes some sense to let him do that and spotlight other voices on SEC Nation.

Of course, all of this imagines that the SEC will actually be playing football this season, and that’s far from certain at the moment. While the conference currently plans to play (unlike the Pac-12 and the Big Ten), and released a full schedule Monday for their conference-only approach, there are lots of questions ahead for it, especially after athletic directors like Alabama’s Greg Byrne have already complained about student behavior in the Tuscaloosa community:

Obviously not these people!! ??‍♂️

We’ve got to do better than this for each other and our campus community. Please wear your masks!? pic.twitter.com/OAFocYZwin

But still, if there’s a SEC football season, SEC Nation will look a little different. And it will be interesting to see how that goes, and how the show does as the third prong in the College GameDay–Big Noon Kickoff wars.