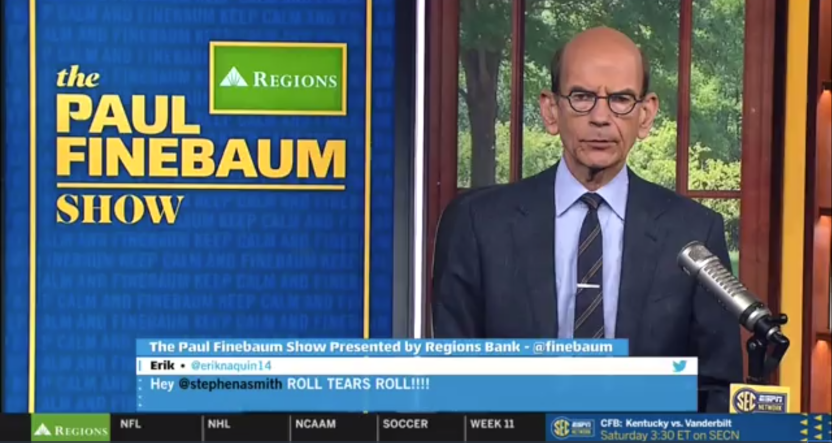 Back in 2018, there was plenty of talk about Paul Finebaum potentially leaving ESPN for Fox and/or the Big Ten Network (which is partially owned by Fox), which didn’t seem to make a lot of sense given his SEC focus. And Finebaum did in fact sign a “multi-year” extension with ESPN ahead of the 2018 football season. However, talk of Finebaum leaving is heating up again, and there’s a further twist this time; beyond just moving his radio show, he’s reportedly in discussions with TV networks about a potential sitcom, and is also mentioned as possibly launching a collection of podcasts. Michael Smith of Sports Business Journal has more details there:

Paul Finebaum and his reps at CAA have met with all four major networks to gauge interest in a sitcom about the 64-year-old radio/TV personality, his call-in show and its many colorful characters. A sitcom is one of several opportunities Finebaum is exploring as he nears the end of his contract at ESPN and SEC Network, sources say. Finebaum’s $5 million, three-year deal runs through next summer, but sources say he could leave as early as the end of the 2020 college football season.

The wheels clearly are in motion for Finebaum’s next move. If he does leave ESPN, the potential landing spots, sources say, are:

Finebaum has been approached about creating a Bill Simmons-style media property similar to The Ringer, a website and podcasting network that sold to Spotify earlier this month for a reported $250 million. Simmons’ timing was impeccable — he grew The Ringer’s number of podcasts to more than 30 at a time when audio started booming, which helped him maximize the business’ value. Finebaum’s show theoretically would be the anchor for a podcast and editorial business. One scenario has it based inside the College Football Hall of Fame in Atlanta.

So that’s interesting on a few levels. First, let’s discuss the general idea of Finebaum leaving ESPN. ESPN feels like a good fit for him on a number of levels because of their ownership of the SEC Network (which televises Finebaum’s ESPN Radio show), but it’s notable that there are some options out there beyond Fox this time. DAZN could be a fit because of executive chairman John Skipper, the former ESPN president who brought Finebaum into that company in 2014 ahead of the launch of SEC Network, and Bobby Burack of The Big Lead wrote in November that Finebaum and Skipper had dinner together in October and that DAZN was looking at adding him. And they have been raising a lot of money; the focus there has been rights deals, but they’ve added some shoulder content as well, most notably a video simulcast of Pat McAfee’s Westwood One radio show. A Finebaum show there could follow a similar model.

The idea of a startup like The Ringer might have some appeal, too, especially one that’s specifically podcast-focused. Finebaum could be an anchor component there, and they could build out a network with shows for each SEC team or even other wider college shows. Considering that recent Ringer sale, there’s certainly some appeal to launching a podcast network at this point. However, it should be noted that there are only a couple of companies really buying podcast networks at this point (especially Spotify), and there are a whole lot of podcasts out there. A startup could be a gamble, even with Finebaum’s presence.

The Ringer has always said it’s drawn strong revenue from podcast ad sales, though, and Finebaum may be high-profile enough to get enough people to tune in to make those ad sales work. And SI or Fox could be a possibility for him as well. However, even with all these other alternatives potentially out there, it still feels like there’s a good chance Finebaum does stay with ESPN and SEC Network, especially with ESPN reportedly set to pick up CBS’ SEC package after 2023 and thus control the entire media rights of the conference.

Beyond that, the sitcom idea is certainly worth talking about. There’s a long history of people trying to make sitcoms about sports media figures, but it often hasn’t worked out that well. Oddly, one of the most successful ones was a show that only ran for one season, Listen Up! on CBS in 2004-05. That show was loosely based on Tony Kornheiser, with Jason Alexander starring as Tony Kleinman and Malcolm-Jamal Warner as radio sidekick Bernie Widmer, a former NFL player (so very much not Michael Wilbon, then), and 22 episodes made it to air. Here’s the first one:

Other attempts based on specific sports media figures included Home Game (based on Mark Schlereth) and Herd Mentality (based on Colin Cowherd), both in development at CBS in 2011. Neither appears to have made it too far, but Deadspin obtained both pilot scripts. We’ll see if a Finebaum sitcom gets any further than that, and we’ll also see what that might mean for him and his show.