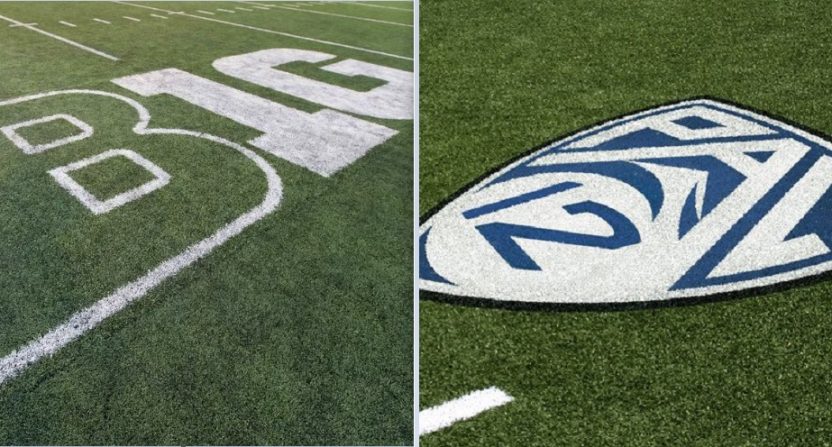 Monday morning began with waiting for what seemed like an inevitable announcement: The Big Ten beginning what will likely be a wave of Power Five conferences announcing the postponement of fall sports, the most important of which is college football. Expectations were for the Big Ten to be the first conference to cut the tape, while others would soon follow.

While no official announcement has yet been made, reports started to trickle out Monday morning that news would come Tuesday. On The Dan Patrick Show, Patrick reported what he was told by a source around 8 a.m. ET. The Big Ten and Pac-12 will announce Tuesday that their respective football seasons will be canceled.

“The Big Ten and Pac-12 will cancel their football seasons tomorrow [Tuesday],” Patrick said, quoting his source. “The ACC and Big 12 are on the fence. The SEC is trying to get a delay to have teams join them. The SEC is looking at exclusive TV contracts.”

Patrick followed up by saying his source was told three Big Ten schools told him, “It’s done.” Furthermore, the SEC was buying time to see if the ACC and Big 12 “would go along with them.”

DP was told an hour ago that the Big 10 and Pac 12 will cancel their football seasons tomorrow… The ACC and the Big 12 are on the fence.. And the SEC is trying to get teams to join them for a season.

According to Patrick’s source, Big Ten presidents and chancellors met Sunday night to vote on playing a college football season. The decision not to play won by a 12-2 vote, with Iowa and Nebraska opposing.

However, if it were up to football coaches such as Michigan’s Jim Harbaugh, the Big Ten would play its season.

Letter from Jim Harbaugh on wanting to play the season and why he thinks it can happen. pic.twitter.com/wUlf8q4vYr

Harbaugh’s letter essentially underlines that the vote was made by school administrators, not athletic officials or coaches.

Several reporters from the Detroit Free Press confirmed Patrick’s report with their own sources approximately two hours later. A number of schools — including Michigan State, Iowa, and Purdue — changed their off-days or media availabilities to Tuesday in anticipation of the conference making an announcement. Meanwhile, Michigan and Michigan State players had reportedly not yet been told that a decision had officially been made.

Source: The Big 12 remains divided on playing this season. Uncertainty about long-term medical impact looms as an issue. Expect the Big Ten and Pac-12 decisions to impact the the Big 12's decision.

Patrick’s note that the SEC is seeking an exclusive TV contract is certainly of interest from a sports media viewpoint. TV networks would certainly line up for any games this temporary super-conference would have to offer. The Big Ten and Pac-12 cancellations leave some gaping holes in Saturday broadcast and streaming schedules.

Though the ACC and Big 12 were mentioned, perhaps some Big Ten schools would be intrigued as well — though the vote not to play would appear to indicate their intentions, at least at the upper levels of school administration, and some conference solidarity.